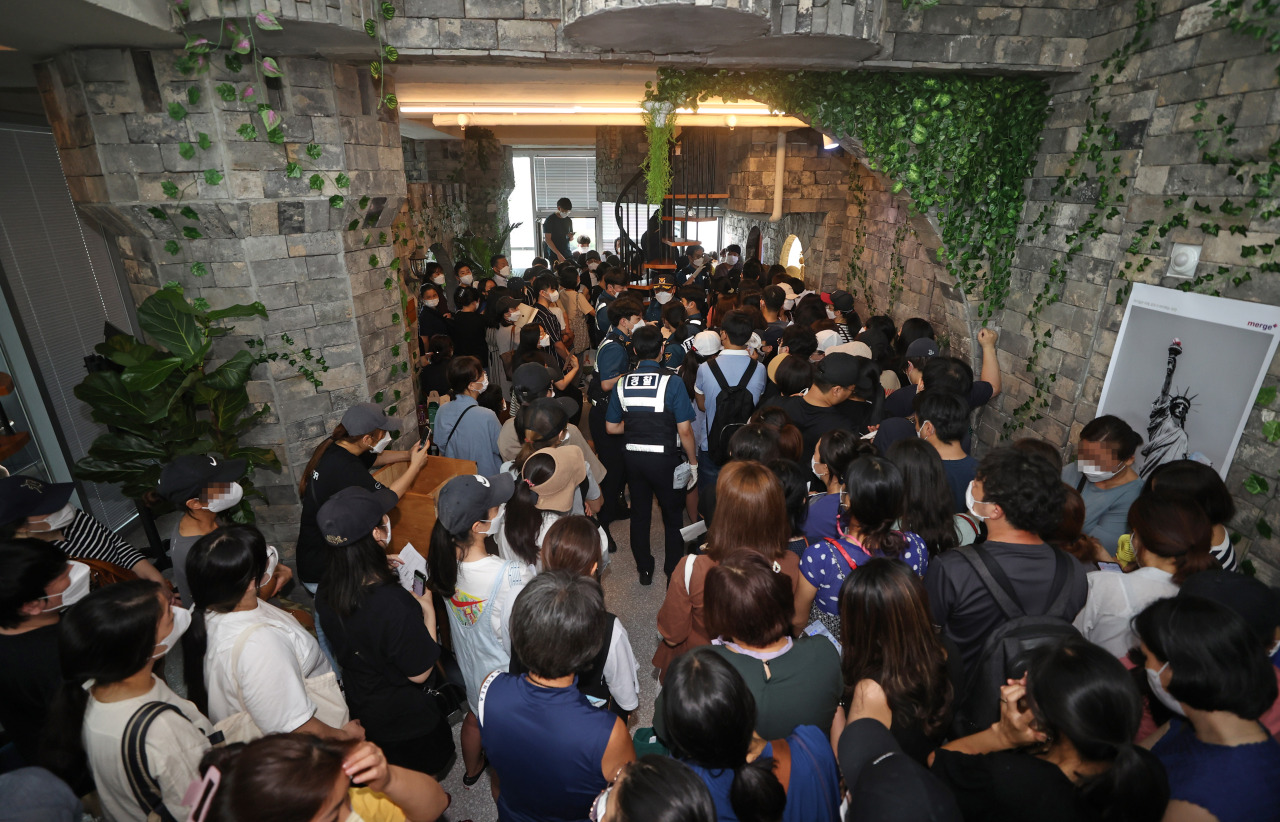 People line up in front of the headquarters of Mergeplus to demand a refund from the company in Seoul on Aug. 13, 2021. (Yonhap)
The blame game between financial authorities and discount app operator Mergeplus intensified Monday, leaving customers who bought coupons uncertain as to whether they would lose their money.

Mergeplus launched Mergepoint, an electronic payment service, in 2018. Consumers can buy Mergepoints for 20 percent less than their face value, and use them in local retail franchises, convenience stores and coffee shops.

The substantial discounts on offer have helped the service attract about 1 million users. Monthly transactions have averaged at around 30 billion won ($25.6 million), industry data showed.

On Wednesday, however, Mergeplus changed its terms, limiting the use of its discount points only to food-related franchises such as restaurants and coffee shops. Regarding refunds, the company announced it would return 90 percent of the money paid, but did not mention when it would do so.

The change of service terms was inevitable, they said, as they were “suddenly” instructed by the Financial Supervisory Service, Korea’s financial watchdog, to register as an electronic financial service provider, rather than as a gift card provider. Currently, an electronic financial service provider can sell prepaid products online for up to 2 million won per transaction, while gift card providers face no such limits.

Customers demanding a full reimbursement have been holding sit-in protests at Mergeplus’ headquarters in Seoul since Friday. One online group for customers has already attracted more than 25,000 members. Some in the group have started a legal review of a potential class action suit against Mergeplus, according to insiders.

The company has been defending itself by saying that it didn’t know that it was supposed to register as an electronic financial service provider, and is now in the process of complying with authorities.

The FSS is also facing public criticism for failing to monitoring the company’s legal ambiguity as a gift card provider in advance, as Mergeplus started its business three years ago.

“E-commerce businesses have grown rapidly in recent years. But there are many operators who lack an understanding of finance regulations, which has caused recent events,” said Hwang Se-woon, a senior researcher at the Korea Capital Market Institute.