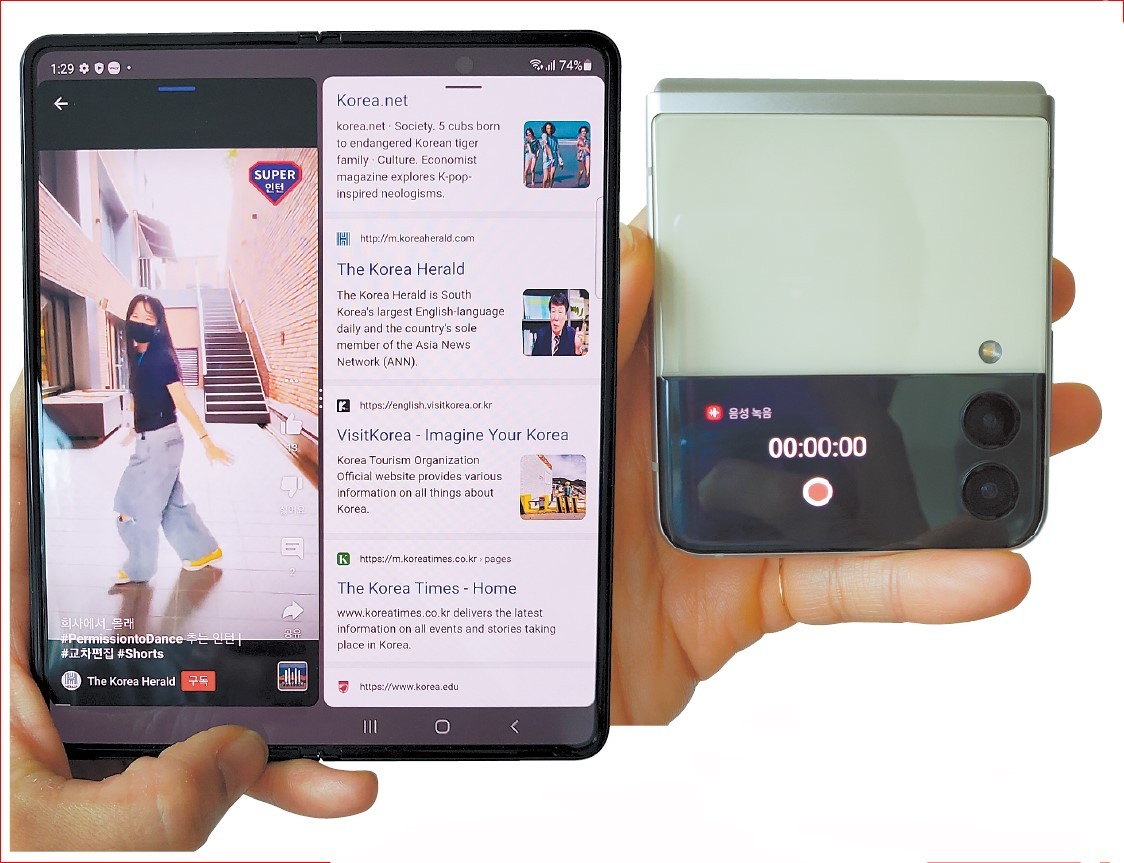 Samsung Electronics’ two latest foldable smartphones, Galaxy Z Fold3 and Z Flip3, didn’t seem to have the “wow” factor when first unveiled, but at a closer look, they do deserve some praise.

As a user of Z Flip, with a husband who also owns the Galaxy Z Fold, I personally had expectations for new editions of the foldable devices, hoping they would be “more comfortable” to use in daily life.

As I had hoped, Galaxy Z Fold3 became slightly thinner and lighter for better portability, while offering a whole new experience of full-screen viewing.

Regular phone users would still think Z Fold3 is heavier and thicker compared to their devices, but Z Fold2 users would easily agree the new edition does feel lighter. The weight has been reduced from 282 grams to 271 grams, according to the product specifications.

When unfolded, Z Fold3 -- including the frame -- is 6.4 millimeters thick, which feels thinner than its predecessor at 6.9 millimeters due to the bulkier frame. The slimmer frame makes Z Fold3 much thinner when folded, too.

Overall, the slight reduction in size offers a better grip and increased portability.

Previous Fold phones were ill-famed with its fragile screen that scratched easily even with fingernails. But Z Fold3’s screen that features Gorilla Glass Victus does look stronger and more durable against shocks.

Personally, the most satisfying change was to the camera hole on the main screen of Z Fold3 that disappears when in full screen mode. The hole cutout does not stand out anymore nor does it disrupt the photo- and video-viewing experience.

Samsung said it has added pixels on top of the camera hole, making the hole cutout part of the display. When looking very closely, the extra pixels are recognizable and users would still see the hole, but it is bearable.

And with Z Flip3, the most exciting change was the bigger cover display.

As a first-edition Z Flip owner, I often felt frustrated with the 1.1-inch display on the cover, because it was too small to read notifications, especially any urgent messages.

Now the 1.9-inch cover display shows up to eight lines of text messages and other important notifications, depending on each users’ settings.

The biggest satisfaction from Z Flip3 is expected to be the hassle-free Samsung Pay on the cover display.

Users can also browse through important images or scan barcodes, including QR codes that are necessary these days in Korea to check in at public places during the COVID-19 pandemic, on the Z Flip3 cover display.

Last but not least, the two foldable devices are finally water-resistant.

Before many users had to take extra care when taking their foldables into restrooms in case they got the expensive phones wet. Samsung had said previous foldable phones were vulnerable to water that could easily seep into the hinges, and over time would eventually lead to the display breaking. Now with the IPX8 waterproof rating for Z Fold3 and Z Flip3, it means users can take out their phones even in rain or snow.

Preorders for both Galaxy Z Fold3 and Z Flip3 will begin on Tuesday through mobile carriers and also on Samsung’s online mall for one week until Aug. 23. The official launch date is Aug. 27.