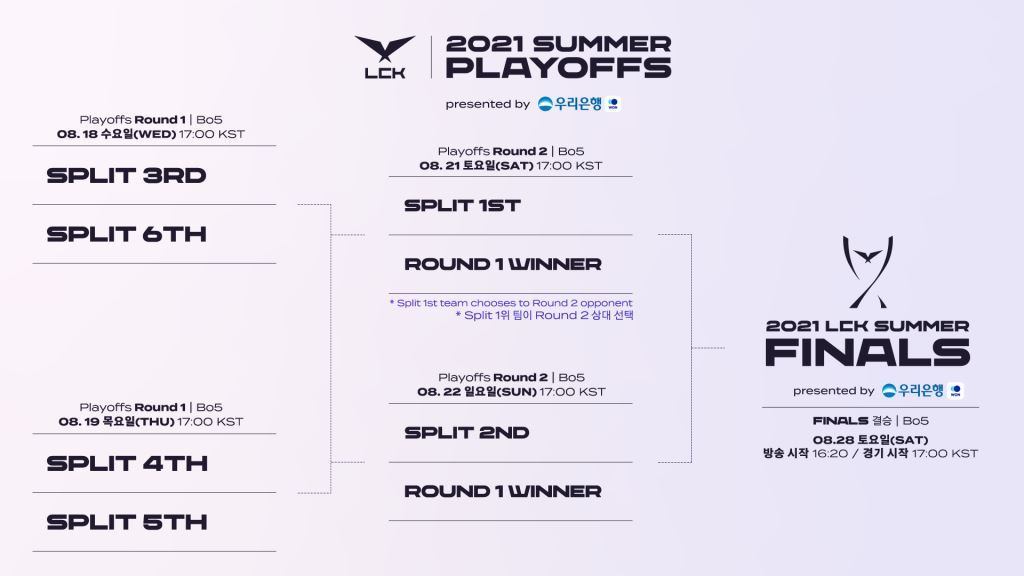 In compliance with the social distancing guidelines, all playoff games will be held without spectators.

With one week remaining in the LCK summer season, all six of the teams that will advance to the playoffs starting Aug. 18 have yet to be determined.

While Liiv Sandbox is currently in the No. 1 spot, the rankings could change this week. The other five teams on the playoff schedule are Nongshim Redforce, Damwon Kia, T1, Gen.G Esports and Afreeca Freecs.

The first round of playoffs will take place at LOL Park in Jongno, central Seoul, Aug. 18 and 19. The first round involves two matches between the third- and sixth-place teams and the fourth- and fifth-place teams, with the winners advancing to the second round to face the first- and second-place teams.

The first-place team has the privilege of choosing its opponent in the second round.

The final is set to run in the best-of-five series.

Total prize money for the LCK summer season is 400 million won ($345,000), but the biggest reward is a chance to compete in the LOL World Championships in the fall.

Teams began the 2021 season with limited fans in the stands. The stadium could only operate at 10 percent capacity.

“The players are scheduled to gather in Shanghai, China, to compete in the World Championship after the LCK summer season. We decided to hold the playoffs without the fans to prevent any unwanted contingencies,” LCK said.

Gen.G Esports and Fredit Brion are set to compete at 5 p.m. on Thursday and decide which one goes to the playoffs.