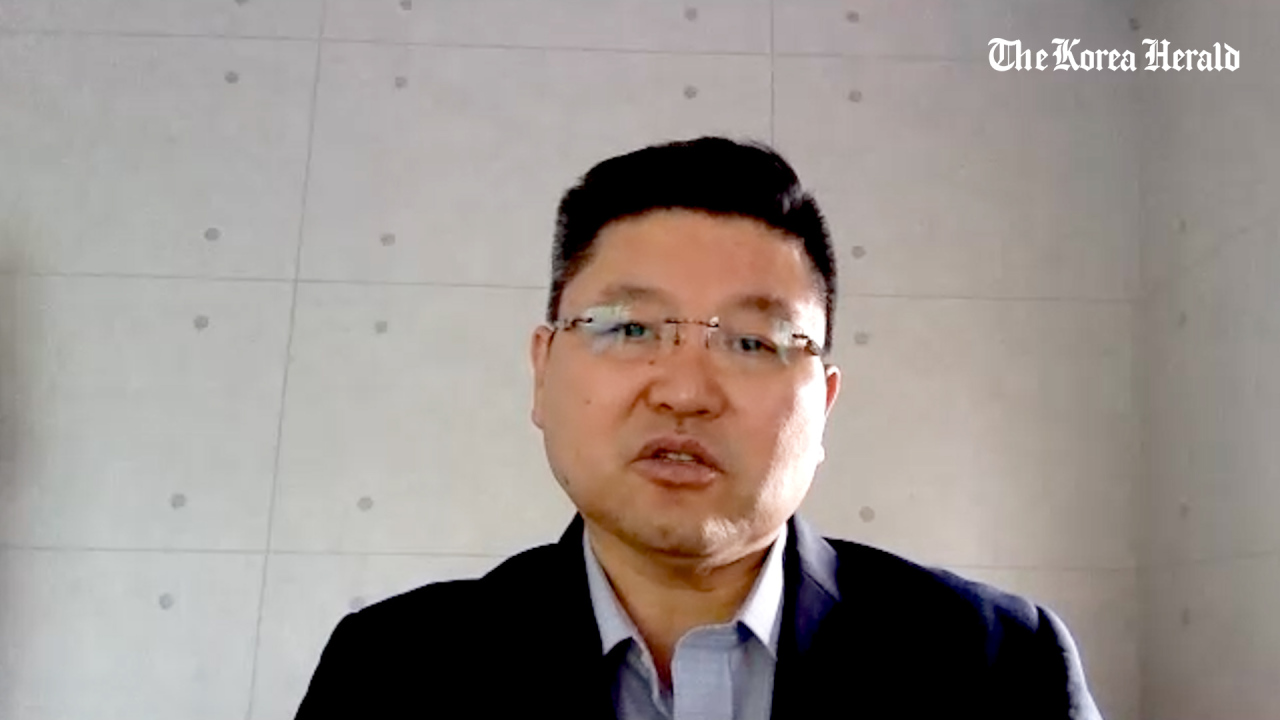 Kang Hyung-won speaks during a video interview with The Korea Herald on July 28.
His penname “Gamro,” given to him by a Buddhist monk, means “spreading a valuable message to the people.” Korean-American photojournalist Kang Hyung-won is trying to live up to that name.

Kang is a man on a mission.

The winner of two Pulitzer Prizes – one in 1993 for coverage of the 1992 LA riots with the Los Angeles Times and the other in 1999 for coverage of the Bill Clinton impeachment and the Clinton-Lewinsky scandal for the Associated Press -- aims to highlight the culture and history of Korea through his expertise, photojournalism. 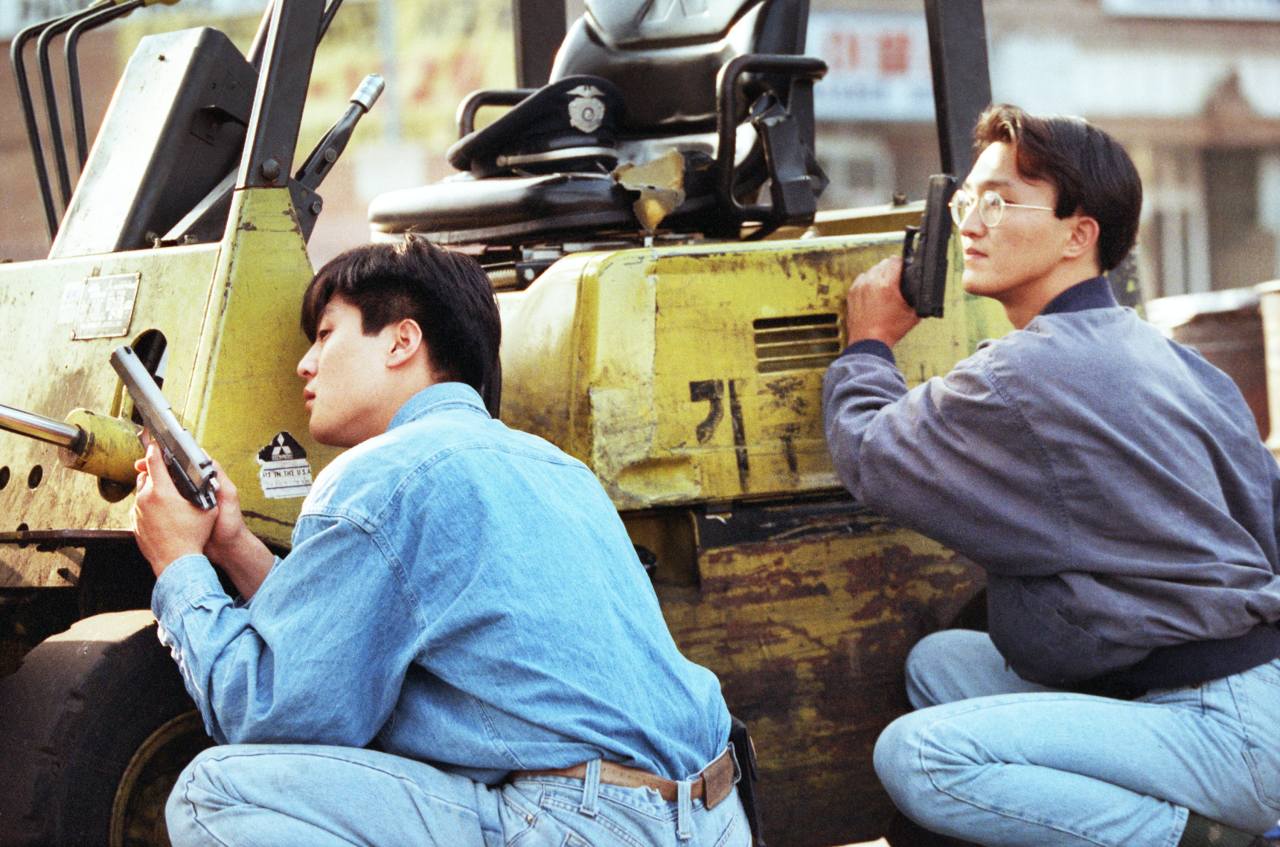 Armed Korean American volunteers guard a market from looters in the Los Angeles neighborhood of Koreatown on April 30, 1992, the second day of the LA riots. (Kang Hyung-won/Los Angeles Times)
Kang embarked on an entirely new project, “Visual History of Korea,” following his early retirement in 2019. After a “life in the front seat of history,” he is now studying and documenting the past.

“I wanted to leave a legacy for my children,” Kang said in a Zoom interview with The Korea Herald from Gyeongsan, North Gyeongsang Province on July 28. He would document Korean history and culture in pictures for his children – 18, 24 and 26 years old – and future generations., he decided.

“The more I learned about Korea history, I realized that there has been a lot of destruction and distortion of Korean history by its neighbors,” Kang said. So, Kang set about work to “leave irrefutable content in pictures that cannot be disputed.”

Once he had set his goal, Kang plowed ahead. Not even the COVID-19 pandemic that greatly restricted international travel would stop him. Since his arrival in Korea on June 15, 2020, Kang has covered 25,000 kilometers, working 24/7. His columns involve rigorous fact-checking and expert interviews, on top of the photographs. By the time of our interview, the self-funded project had yielded 54 weekly columns for a Korean-language newspaper published in the US.

“Photojournalism requires logistical effort. Being there is the most challenging aspect,” said Kang. It also requires a lot of patience and preparation. Being prepared often means multiple visits to the site and waiting. “Showing up and deciding how to make the image unforgettable,” Kang said of his process.

A water deer runs over a Daegaya tomb in Goryeong, North Gyeongsang Province, in 2021. (Courtesy of Kang Hyung-won)
Sometimes, his patience and preparation reap huge rewards. The magnificent shot of gorani, or water deer, in a full leap, all four legs midair, over a Daegaya tumulus in Goryeong, North Gyeongsang Province is one such example. The photo bears an uncanny resemblance to a mural painting of a hunting scene from a Goguryeo tumulus. “I was waiting for a nice sunset image. As the sun was setting, the gorani appeared,” Kang said.

Kang counts photographing “jobo,” a newspaper thought to have been printed in 1577 during the Joseon era, as the highlight of his project so far. It could very well precede by 83 years the Leipziger Zeitung, known as the world’s first printed newspaper, published in Germany 1660.

“Thirty people were exiled for printing the paper,” said Kang. The newspaper was printed using a mix of metal and wooden movable types. Official jobo were written by hand and issued by the court and when the king discovered that printed copies had been circulated, he ordered severe punishment for the some 30 people involved in the printing, according to an entry in the Joseon Wangjo Sillok dated 28th day of the 11th month in the year 1577 in the lunar calendar.

The jobo, recycled as a bookbinding material, was discovered by Ven. Jibong of Yonghwasa Temple in North Gyeongsang Province in 2017.

“It was just an amazing experience to photograph and tell the story of the first press and press oppression,” said Kang. 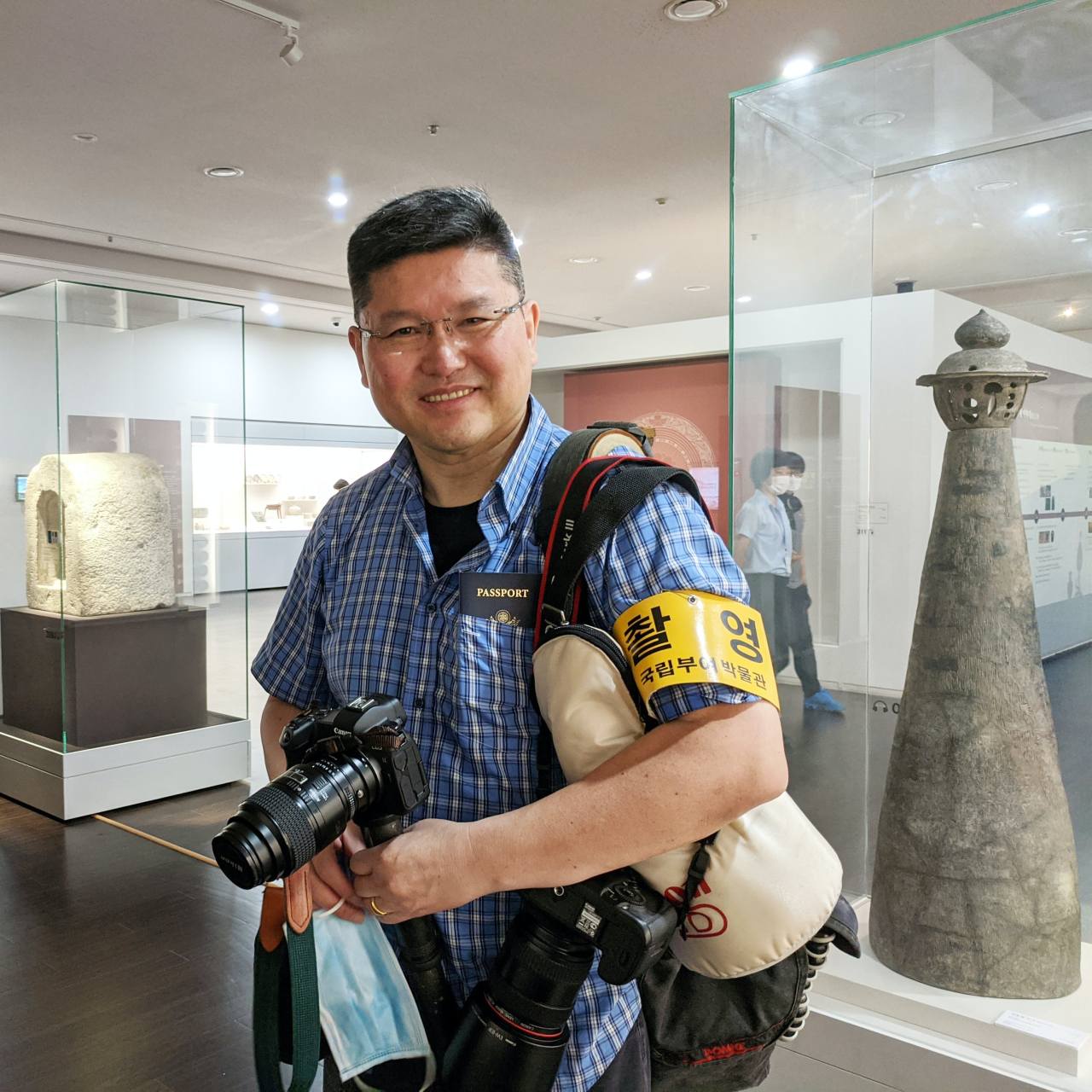 Kang Hyung-won poses at the Buyeo National Museum in Buyeo, South Chungcheong Province, in 2020. ((Courtesy of Kang Hyung-won)
One of the biggest challenges of the project is gaining access to artifacts, according to Kang. He was unsuccessful in gaining access to Hunminjeongeum Haerye, a book on the promulgation of Hangeul.

As a photojournalist, he is used to dealing with such difficulties and knows that, sometimes, personal connections can go a long way. “Most of my time is spent building contacts, introducing myself,” Kang said.

In his work, Kang strictly adheres to the NPPA (National Press Photographers Association) standards. “No set up, no manipulation,” Kang said. 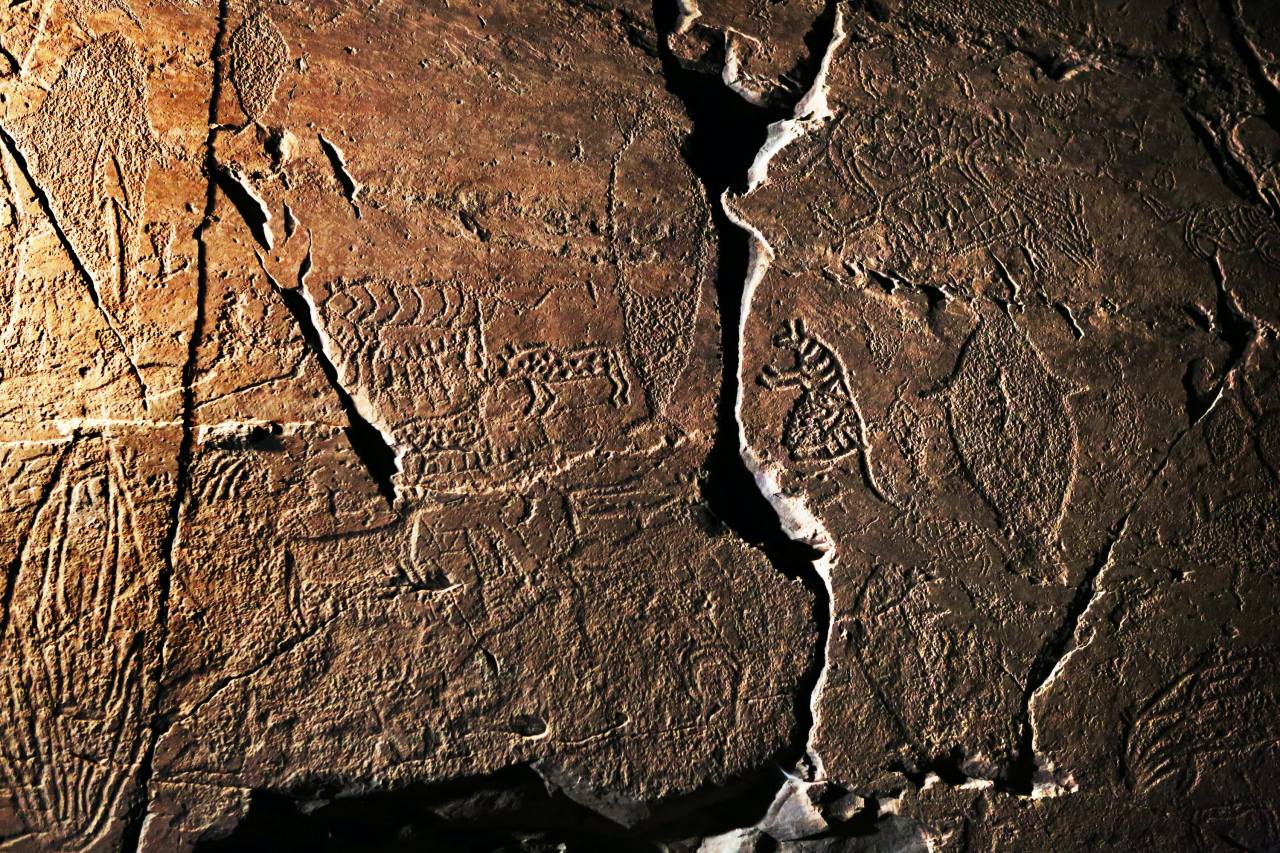 Stone Age rock art, believed to be the oldest remaining rock art in the world, is seen at the Bangudae Petroglyphs site in Ulsan. (Courtesy of Kang Hyung-won)
Kang plans to be in Korea at least through the end of the year. From then on, he plans to expand to scope of his coverage to the rest of the Korean Peninsula and beyond. Once he is satisfied with discovering South and North Korea, he said, he plans to cover neighboring countries as well as the Korean diaspora, documenting the spread of the Korean people and its culture in different parts of the world.

He also hopes to have the first volume of the book based on the “Visual History of Korea” project published in a coffee-table book form this fall. “The book will be trilingual – English, Korean and photojournalism,” Kang said, adding, “Storytelling pictures are a visual language all by themselves.”

After decades of chasing after the top 10 news of the day, Kang said, “I am doing things that are of interest to me, that give me great joy.”

“Every moment is a once-in-a-life moment,” said Kang of photography. “Chances favor those who are prepared,” said Kang. “You have to learn to anticipate and have the camera ready.”

He could just as well have been talking about life.