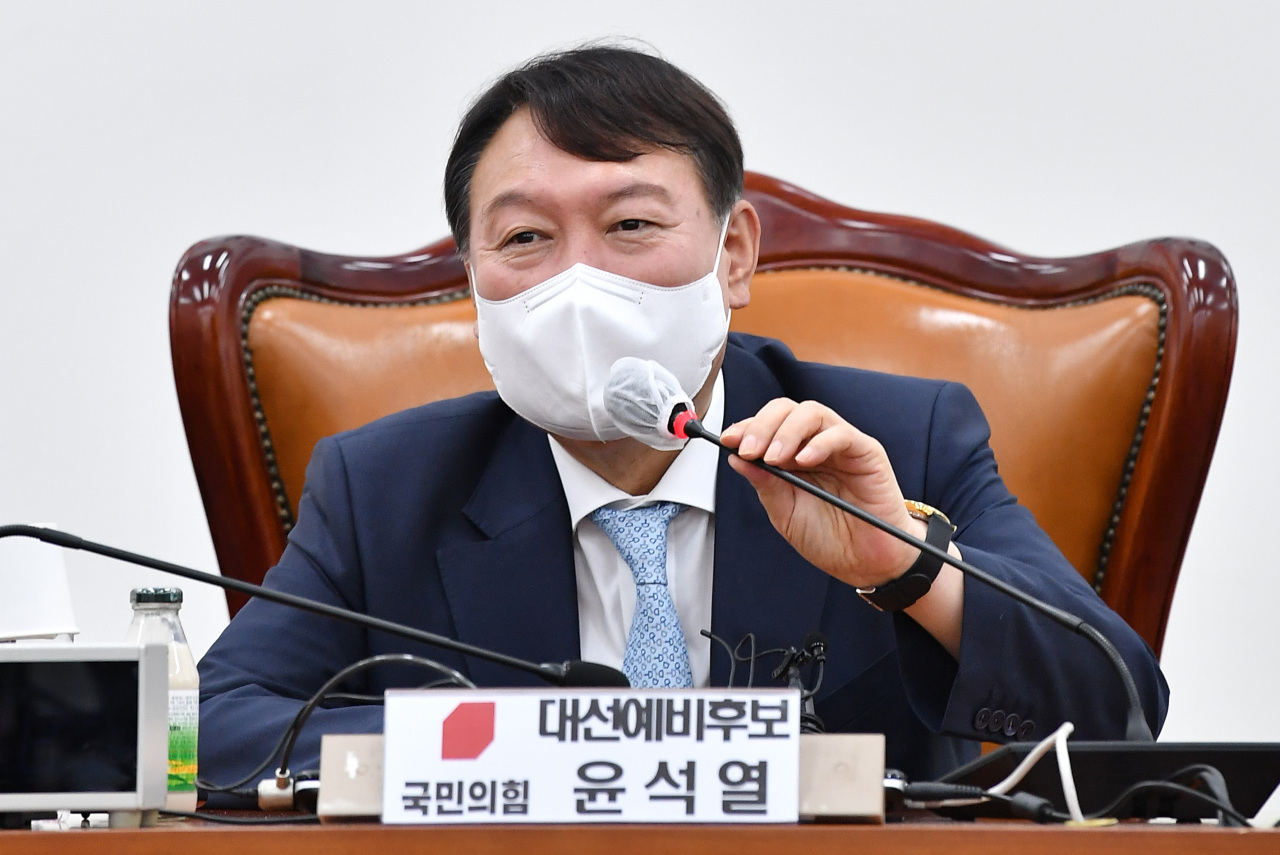 Former Prosecutor General Yoon Seok-youl, a front-running presidential aspirant who has joined the main opposition People Power Party, delivers a lecture during a study meeting of the party's first-term lawmakers at the National Assembly in Seoul on August 8. (Yonhap)
The main opposition party has set its primary schedule, but is hit by an internal feud, as some presidential contenders expressed discontent over how it’s going to be done.

Yoon, who has not yet registered as a preliminary presidential candidate in the party, did not attend events organized by the party such as a meeting of the preliminary candidates and a visit to deliver food to the poor.

Members of Yoon’s camp have accused the PPP leadership of lacking consideration for the leading candidate, saying a debate of some 10 people will be focused on attacking Yoon.

Another presidential contender, Won Hee-ryong, who stepped down as Jeju governor on Wednesday, said it was a serious problem that a lot of the ideas for the primary were coming from Lee Jun-seok.

Won said in a radio interview on Tuesday that the PPP’s primary preparation committee, which is not even in the party’s constitution, was “going beyond its powers” by finalizing cut-offs and primary events.

Lee shot back at Won on Facebook, saying “would you like to be the referee as well as the candidate?”

Lee asked candidates to refrain from making overbearing comments on the committee, which is entrusted with the leadership’s authority to ensure fair management and promotion of the primary.

Rep. Chung Jin-seok, a key member of Yoon’s camp, criticized Lee last week, saying he was putting “dolphins, mackerels and anchovies,” or candidates of different weights, in one place to grow them when they all need different conditions for growth.

Lee responded by saying the party leadership was not pressing down dolphins; it was giving “fair opportunities to mackerels and anchovies to let their policies and ideas be known to the people and party members, and the dolphin is probably uncomfortable with that.”

On Wednesday, Chung got on Lee’s nerves by citing a phrase from former US president Barack Obama’s memoir “A Promised Land” on Facebook that “You could build power not by putting others down but by lifting them up. This was true democracy at work.”

Lee responded on the social media with a “Lion King” reference, “I wish we had bright and positive warthogs and meerkats around our candidates, not a hyena inciting lust for power.”

Rep. Park Jin, another presidential contender of the PPP, expressed concern over the internal disruption, and advised Lee to calmly speak with the candidates rather than quickly respond on social media.

“The opposition has repeatedly stressed that we should unite for change of government, but we keep seeing shadows of strife. I am more worried because chairman Lee Jun-seok is at the center of it,” Park wrote on Facebook on Tuesday.

“Regardless of right or wrong, people watching the party are concerned of discord between the leader and the candidates.”

The People Power Party decided Tuesday to pick eight preliminary candidates on Sept. 15 based 100 percent on polls after voluntary work in rural areas, open interviews and policy presentations; and narrow them down to four on Oct. 8 based on electoral college surveys (30 percent) and public polls (70 percent).

The final four will go through 10 debate sessions, three of which will be one-on-one debates, and the final presidential candidate will be chosen on Nov. 9 through an electoral college (50 percent) and public polls (50 percent).