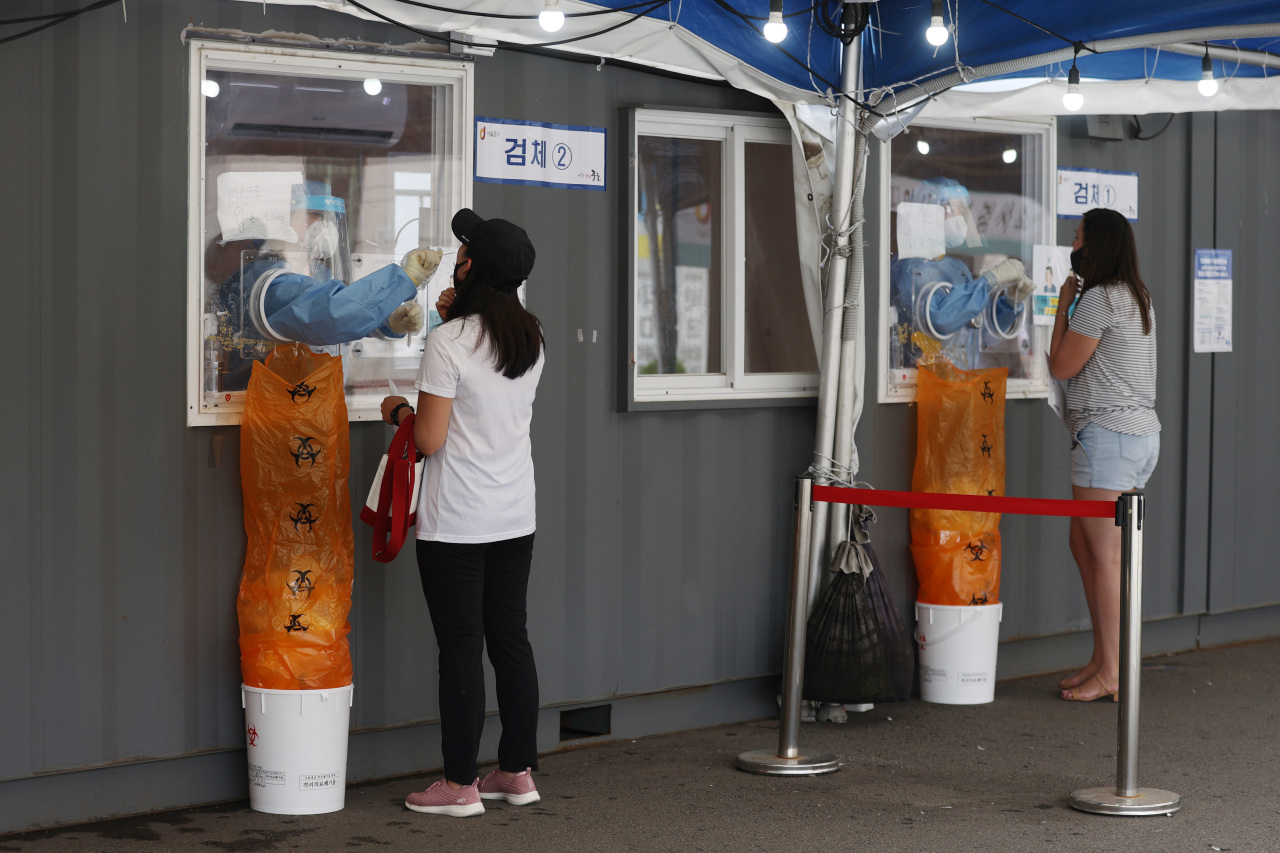 People get tested for COVID-19 at a temporary clinic in Seoul on Sunday. (Yonhap)
Despite having its most restrictive social distancing measures in place for nearly a month, South Korea is still scrambling to curb the spread of the coronavirus.

The country reported 1,729 newly confirmed cases in the 24 hours ending Saturday at midnight, setting yet another record. It is the highest daily case tally on a weekend since the outbreak began early last year.

“The fourth wave led by the delta variant, unlike the past waves, is characterized by faster spread and stronger infectivity,” Ministry of Health and Welfare spokesperson Son Young-rae said Sunday.

“In addition, the combination of vacation season and fatigue from prolonged (social distancing measures) is making it take longer to control the virus.”

The number of newly confirmed COVID-19 cases usually declines on weekends because fewer people get tested, according to the Korea Disease Control and Prevention Agency’s data.

It was different this time. The number of people who got tested for the virus on Saturday was 106,379, much lower than Friday’s 146,587. But Saturday’s daily case count was not far off from Friday’s figure of 1,823.

Because the country has yet to contain this stubborn fourth wave, on Friday the government announced that it would extend the Level 4 social distancing measures for two more weeks through Aug. 22 in the Greater Seoul area. The rest of the country will be put under Level 3 measures for the same period.

At Level 4, gatherings of more than two people are prohibited after 6 p.m., while no more than five people can gather at Level 3. At both levels, restaurants and cafes must close after 10 p.m. but can still offer delivery service.

But as the virus continues to spread across the country, questions have been raised about the effectiveness of the restrictions.

“The Level 4 distancing measures have been in place in the Greater Seoul area for about a month now and it has not been ineffective,” Son said.

“It appears that (the measures) have slowed down the surge in the capital area and are turning it into a very gradual decline.”

In regards to whether stronger distancing rules are needed to curb the infections, the official explained that assessments on how contagious the delta variant is and the effectiveness of vaccine have to be carried out.

Another concern is the increasing number of infections reported outside the Greater Seoul area.

Although the number of cases reported in Seoul, Gyeonggi Province and Incheon made up 58 percent of Saturday’s nationwide total, the number of newly confirmed cases outside that region surpassed 700 for the first time since March last year. At that time, the country’s first wave was at its worst in Daegu and nearby North Gyeongsang Province.

The number of confirmed cases outside the capital region has gone up steadily over the past week, reaching the 600s Wednesday before hitting 703 Saturday.

Busan, the country’s second-largest city, with a population of 3.36 million, reported its highest number of daily coronavirus cases Saturday, 145. It was the biggest tally outside the capital region.

A cluster at a hospital in Busan accounted for 38 cases. Of them, 34 were in fully vaccinated people, meaning they had received both their first and second COVID-19 shots.

To prevent the further spread of the virus, Busan announced Sunday that it would implement Level 4 social distancing rules from Tuesday and shut down all beaches.

Meanwhile, people aged 18 to 49 -- the youngest group that is eligible for vaccination -- will begin making appointments this week. The government will open its online reservation system to this group Monday.

Health authorities said the reservation program was intended to prevent traffic overflow, which often occurred when older people tried to book shots. People who missed out on the designated dates to book appointments will get another chance starting Aug. 19.

According to the KDCA, approximately 20.9 million people, or 40.1 percent of the population, had received their first jabs as of Saturday. Among them, 7.7 million were fully inoculated.