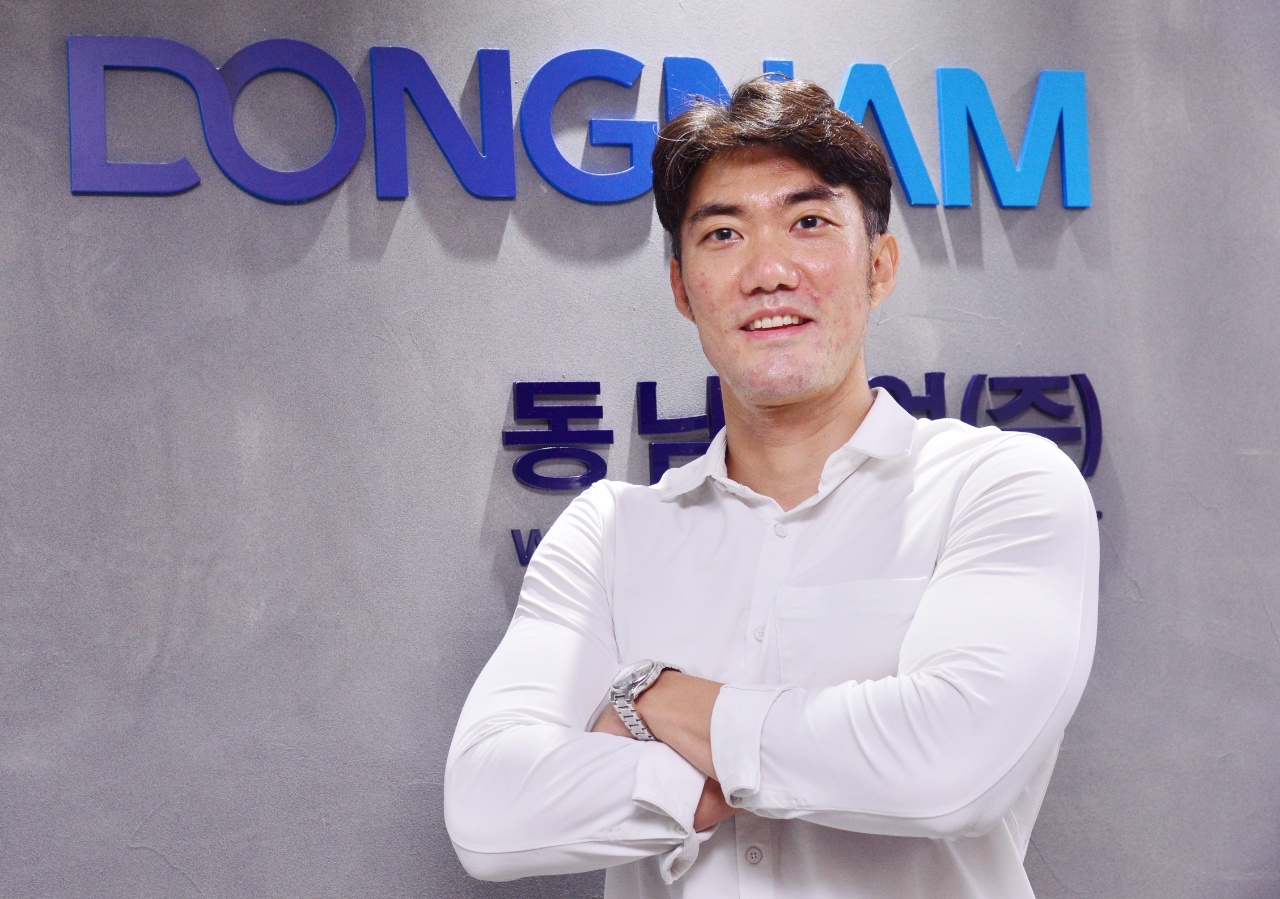 Dongnam Construction Chemical CEO poses in front of the company logo, at its office in Pangyo, Gyeonggi Province, Wednesday. (Park Hyun-koo/The Korea Herald)
It was Kim Hwang-su’s father who built Dongnam Construction Chemical from scratch and grew it into a leader in the local concrete admixture market. Now, the second-generation chief, 38, aims to take on the conservative industry with technological innovations.

“I think my father had faith in the local constructions market,” said Kim, who took over as CEO in 2018, as he recalled memories of his father. “He believed there would come a time when our country also starts building landmark architectures, tall skyscrapers and large bridges we see in developed countries.”

His father spent decades in construction business and founded Dongnam in 1983, he said.

Admixtures are additives mixed into concrete or mortar to change their density or add certain properties, such as making it quicker drying or more resistant to damp. When Kim’s father first imported the products in the early 1980s, they were a fairly unfamiliar construction material, according to Kim.

Industry awareness grew in 1994, when the Korea Standard Association required construction companies to use admixtures in their cement. Tragic events like the Sampoong Department Store collapse in 1995, motivated firms to develop stronger and higher-performing admixtures.

Dongnam was one of those companies committed to developing newer and better admixtures. The company opened a research lab in 2000 in a bid to focus on research and development instead of making a profit from mass apartment projects.

As a result, the firm was able to participate in the construction of some of Seoul’s landmark skyscrapers. It developed new admixtures for the 73-story Tower Palace residence in Gangnam, southern Seoul, as well as the Lotte Tower, currently the tallest building in Korea.

It now holds the largest share of the local admixture market, posting revenues of 27 billion won ($23.6 million) in 2020. 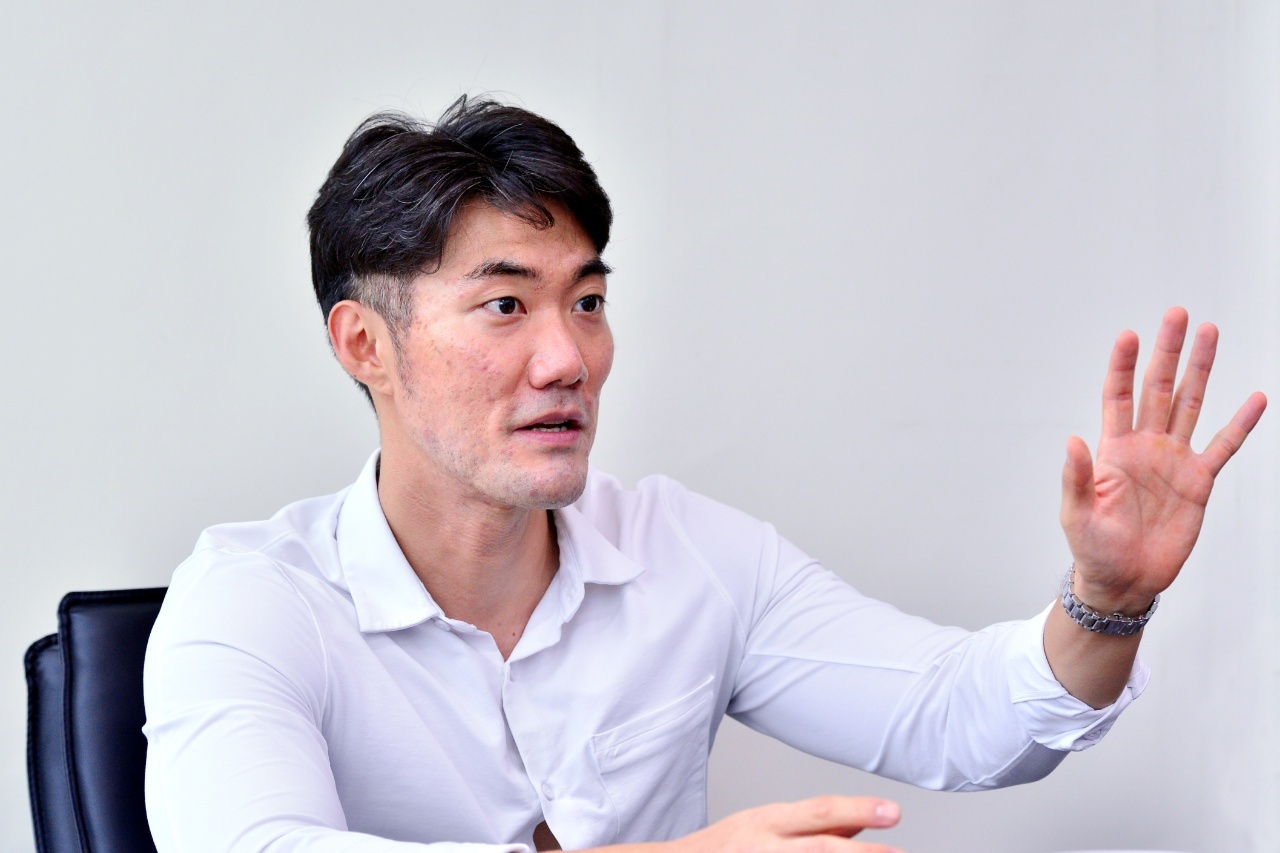 Dongnam Construction Chemical CEO speaks during an interview with the Korea Herald at the company office in Pangyo, Gyeonggi Province, Wednesday. (Park Hyun-koo/The Korea Herald)
Although construction is typically a conservative industry and slow to change, the younger Kim believes technology will eventually reshape the way people design, build and maintain buildings.

The company is developing admixtures to produce lighter and effective concrete materials as he hopes one day to partner with IT and tech companies and use new materials developed by the company to create buildings with innovative designs.

One such example is admixtures used to produce ultrahigh performance concrete (UHPC) -- a strong and durable concrete considered among industry officials as a replacement for steel. Dongnam is also working with government institutions to develop admixtures that create concrete that can be used in 3D printers.

“Demand for unique and creative spaces will grow in the near future, with the fourth industrial revolution innovating construction technology. These technologies can help architects break away from the conventional square-shaped designs and try creative and innovative ones.”

The CEO is also bent on expanding into South East Asia, starting with Malaysia where it built a factory in June last year.

“Admixtures need to be delivered to construction sites as fast as possible, and we cannot do that without a regional factory,” said Kim as he explained his expansion to Malaysia.

“We were confident our technology was mature enough to spread out to newly developed countries. We are planning to open an office in Singapore and another one in Vietnam next year.”

He said the next plan was to expand his business into basic chemicals. As part of that effort, he opened a chemical research lab in Ansan, Gyeonggi Province last year for the new venture.

“South Korea is leading the semiconductor market, but we are only skilled at reprocessing basic materials bought from other countries. It’s about time small companies like us step up efforts and produce basic materials needed in the manufacturing sector,” Kim said.

“At the end of the day we are a chemical company. This may sound ambitious, but our next goal is to become the likes of DuPont, BASF or Dow Chemical and develop basic chemical substances needed for the next generation of technology.”