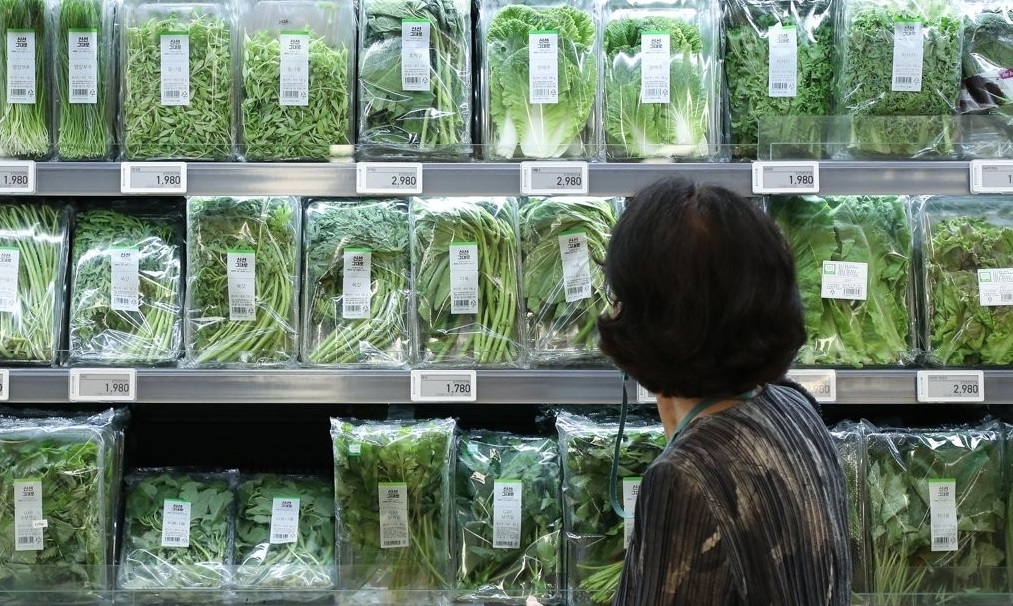 Fresh agricultural products are displayed at a supermarket in Seoul on July 28, 2021. (Yonhap)

South Korea’s food price inflation in the second quarter ranked the third highest among members of the Organization for Economic Cooperation and Development, data showed Sunday.

The prices for groceries and nonalcoholic beverages surged by 7.3 percent on-year in the April-June quarter, the fastest gain since 2011, when food prices rose 7.8 percent in the same period, according to data compiled by the OECD and Statistics Korea.

Far above the OECD average of 1.6 percent, this on-year rise was the third highest among the 38 OECD member countries that announced their inflation indexes for the corresponding quarter, following Turkey and Australia, which topped the list respectively with 18 percent and 10.6 percent.

It climbed up 23 notches from the previous year, when prices for groceries and nonalcoholic beverages rose 2.5 percent, marking the 26th highest among OECD member states.

The key factor boosting Korea’s food prices during the second quarter was a short supply of agricultural products amid the outbreak of bird flu.
For instance, prices of agricultural, livestock and fisheries products grew 17.9 percent on-year in April, with prices of green onions advancing 270 percent, according to the statistics agency.

On the back of higher prices of farm products, consumer prices grew more than 2 percent for the third straight month in June, indicating a build-up in inflationary pressure, data showed.

Such an uptrend in food prices continued to prolong in July, raising concerns that the current contracted supplies will continue to fail to meet demand until next month when the Chuseok holiday starts.

Last month, the price of agricultural, livestock and fisheries products gained 9.6 percent on-year. Egg prices jumped 57 percent, even as the country has reported no cases of bird flu since April, while the cost of apples, pears, red pepper flakes and pork all jumped in the same month -- 60.7 percent, 52.9 percent, 34.4 percent and 9.9 percent, respectively.

Responding to the pick-up in consumer inflation, the government plans to bring in 100 million eggs in August and September, respectively, according to the Ministry of Economy and Finance on Tuesday.

“The government will mobilize all policy means to increase the supply of agricultural products ahead of the Chuseok fall harvest holiday slated for September,” it said.

Driven by soaring food prices, eating-out expenses have also risen significantly over the past few months.

According to the data from the Korea Consumer Agency, seven out of the eight dishes most favored by South Koreans when eating out saw their prices go up between the January-June period.

Prices of naengmyeon, or cold buckwheat noodles, in the Seoul metropolitan area, went up nearly 6 percent in April to 9,500 won ($8.29), on average.

The second-largest gainer was gimbap -- a seaweed-wrapped rice roll filled with a variety of ingredients -- which saw a 3.2 percent on-year gain in its prices to 2,731 won.