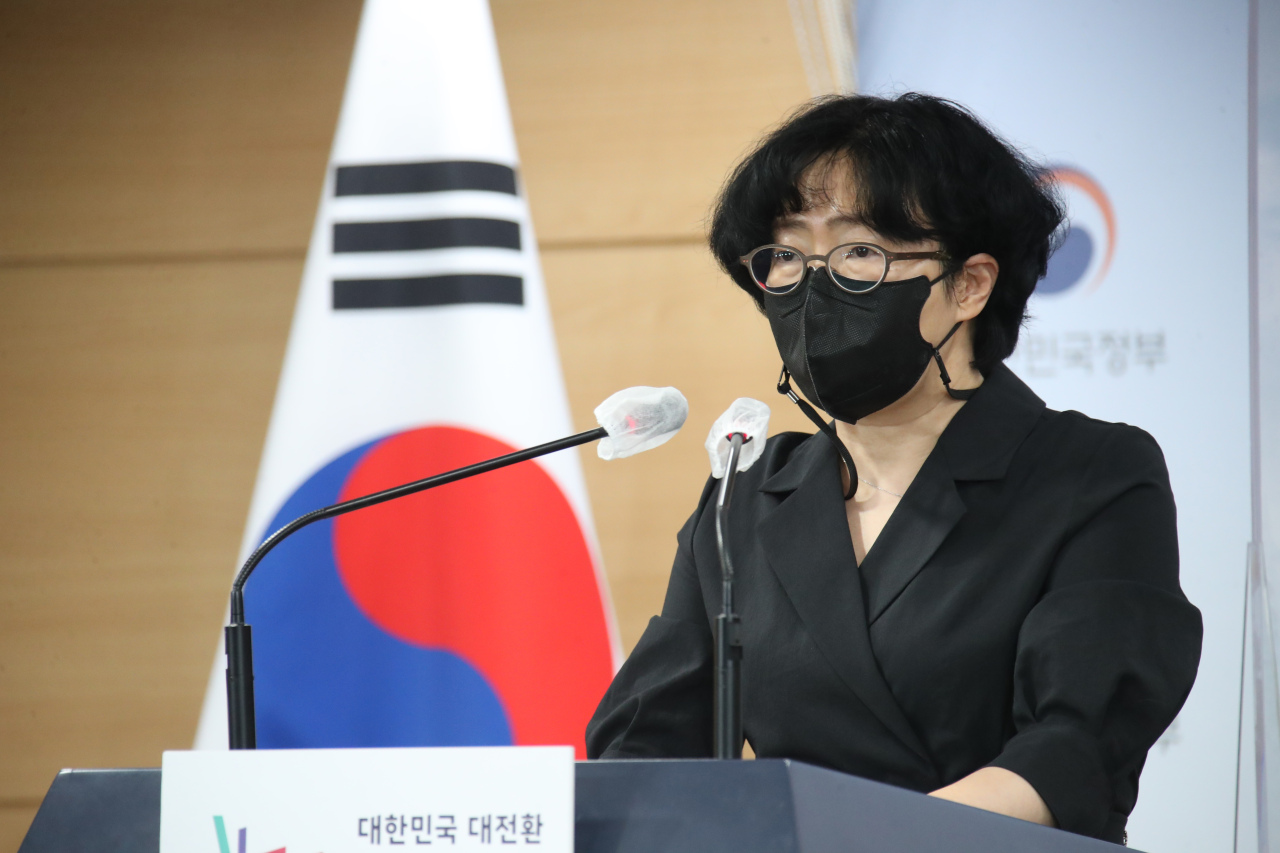 Co-chairperson of the Presidential Committee on Carbon Neutrality Yun Sun-jin speaks during a press briefing on the committee’s three scenarios for achieving carbon neutrality by 2050 at the government complex in Seoul on Thursday. (Yonhap)
The Presidential Committee on Carbon Neutrality unveiled Thursday three options for reducing carbon emissions by 2050, but only one of them achieves carbon neutrality.

Depending on which road map the country decides to follow, net emissions in 2050 could vary from zero to 25.4 million metric tons.

“The committee established the vision of a safe and sustainable carbon neutral society from the climate crisis and reviewed the scenarios based on five principles: accountability, inclusiveness, fairness, reasonableness and innovativeness,” said Seoul National University’s environmental professor Yun Sun-jin, who is a co-chairperson of the committee.

According to the committee, the first road map considered developing technology and switching to more environmental energy sources while maximizing the use of existing infrastructure.

Under the first plan, the country will continue to use some fossil fuels, including coal for power generation, which it projects would result in producing 153.9 million tons of greenhouse gases in 2050. Of this, 95 million tons will be eliminated using carbon capture, and absorbents such as forests will take out 24.1 million tons while eco-friendly energy is expected to offset it by 9.4 million tons.

Carbon capture refers to the technology of capturing carbon dioxide emissions from industrial activities to safely store them or reuse them by turning them into marketable materials such as cement. CCUS plays a crucial role in meeting global energy and climate goals.

The reduction measures will lead to the first road map ending up with a total of 24.5 million tons of greenhouse gas emissions produced in Korea in 2050, approximately down 96.5 percent from the 727.6 million tons in 2018.

Under the third scheme, coal-fired and LNG power plants will be completely shut down. Instead, it seeks to increase the supply of renewable energy and use green hydrogen technology.

Other reduction measures include increasing the number of hydrogen and electric vehicles, implementing more eco-friendly construction technology, and amending the laws related to farming to curb greenhouse gases from livestock.

“As there are uncertainties in the premises and assumptions used for the long term outlook, we believe that (the scenarios) need to be renewed over a certain period while considering changes in conditions in the future.”

Civic groups and industries, however, expressed worries over the committee‘s proposals.

The Korea Federation for Environmental Movements criticized the committee for announcing carbon neutrality plans despite two of the three road maps still emitting greenhouse gas, saying that it proves the committee’s “poor skills.”

The Energy Justice Actions pointed out that there are no middle goals or processes in the scenarios.

“Even the third plan that achieves carbon neutrality does not clearly state when coal burning power plants and cars with internal combustion engines will come to an end,” the EJA said in a statement.

The Federation of Korean Industries said the feasibility of carbon reduction technology and fuel conversion proposed by the committee is also unclear at the moment, asking for the committee to actively listen to industries and reflect their voices in the road map.

Although the Korea Enterprises Federation said that they agree with the goal of going carbon free in 2050, they voiced concerns.

“Since Korea has an industrial structure centered around manufacturing and highly relies on using coal for power generation, rapid reduction in greenhouse gas emissions can weaken companies‘ competitiveness and have a significant impact on the economy and society,” the KEF said in a statement.

The committee said it will receive feedback from all sectors of society, including industry representatives, labor organizations, civic groups and local governments. A carbon neutrality committee, which consists of 500 members of the public aged 15 and older, is also slated to launch Saturday to offer their takes on the road maps.

After collecting feedback, the country plans to eventually announce the final blueprint in late October.