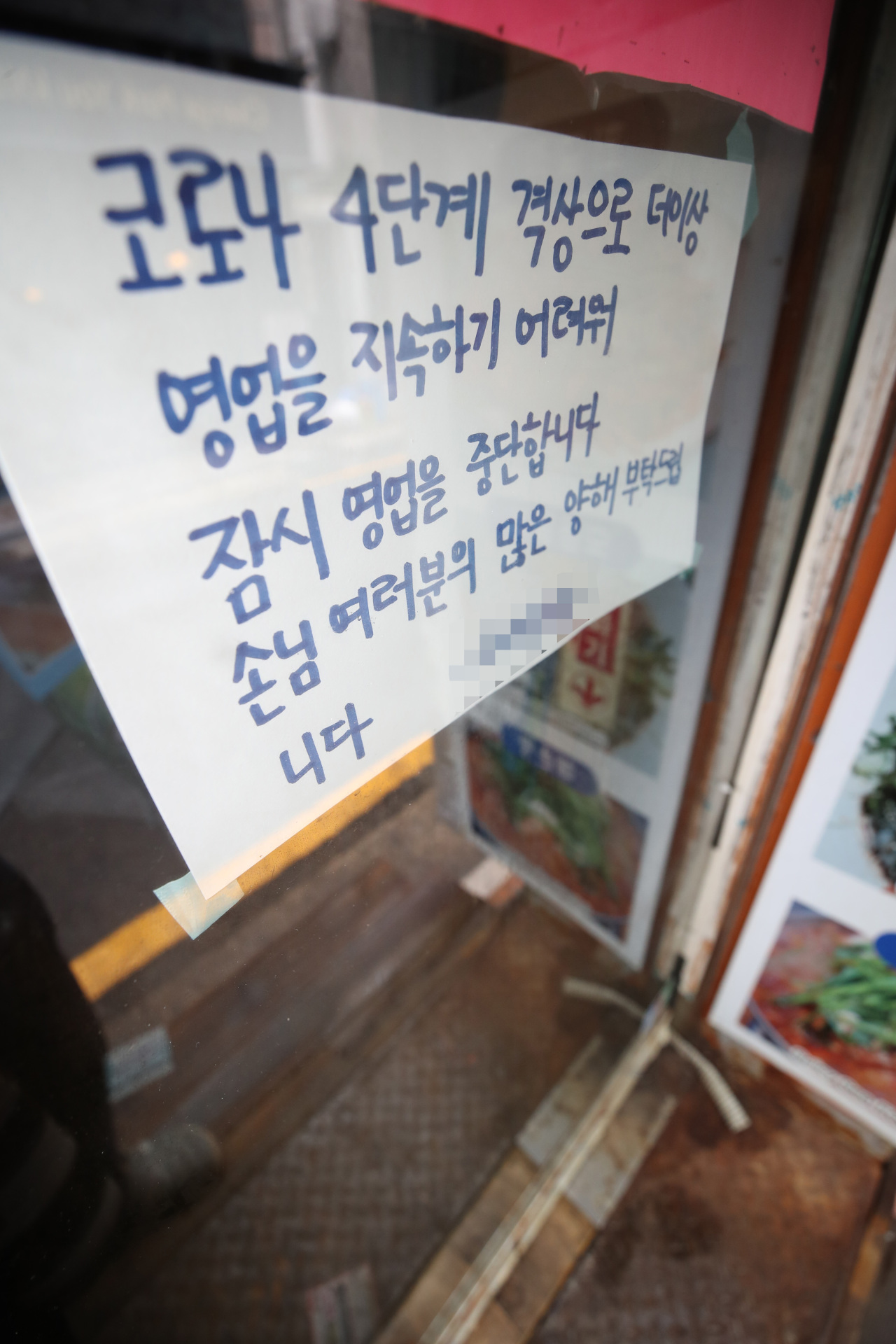 The country had 5.58 million self-employed people registered as of June, accounting for 20.2 percent of the total 27.6 million employed workers in the same month, the smallest proportion in nearly 39 years, according to data compiled by the Korea Small Business Institute and Statistics Korea.

Among them, the number of self-employed people with employees plunged 83,000 on-year to 1.28 million in the same period, while those without employees increased by 112,000 to 4.3 million.

The figures indicate that a large number of small merchants have laid off their staff to reduce operating expenses to counter a sharp decline in overall sales amid protracted social distancing rules, according to officials.

The number of employed people reached 27.6 million last month, 582,000 more than a year earlier, due to a lower base effect and the economic recovery, according to the statistics agency.

As the fourth wave of COVID-19 infections pummeled face-to-face services, such as restaurants and accommodations, a growing number of self-employed people are rushing to take out credit loans from commercial banks, in an effort to stay in business.

The outstanding balance of credit loans extended to the self-employed by the nation’s five major lenders -- KB Kookmin, Shinhan, Woori, Hana and NH NongHyup Bank -- stood at 289.1 trillion won ($252 billion) at the end of July, up nearly 20 trillion won from a year earlier.

“After paying rent, salaries to part-time workers and utility bills, sometimes I earn less than my staff. Without bank loans, I don’t think I can handle the ongoing economic fallout caused by tougher social distancing rules coupled with an increase in minimum wage,” said Yang Yoon-ho, 35, who runs a coffee shop near Cheonan train station.

The government last month placed the greater Seoul area under the toughest social distancing rules of Level 4, which banned gatherings of more than two people after 6 p.m.

“Self-employers’ excessive reliance on credit loans to cope with the economic slowdown is likely to increase the amount of bad loans in the banking sector,” said Kang Sung-jin, a professor of economics at Korea University. “The government should expand financial support measures like tax benefits for small businesses that have business capability but are temporarily short of operating funds.”

In response to the growing concerns over small businesses‘ piling debts, the government said it would consider extending loan maturity and delaying interest payments for small firms and mom-and-pop stores.

Talks with banks on feasibility of another debt rollover will begin and a decision will be made in September, Finance Minister Hong Nam-ki said during an emergency economic meeting on Thursday.

Small-business owners were initially set to repay loans and interest payments to local lenders by the end of September after financial authorities had advised banks to extend the due date by six months twice.

Another measure to support small merchants hit hard by the pandemic is delaying the second-installment payment of taxes and social insurance fees. Details of the scheme will be announced in August.

The government also plans to give out 90 percent of COVID-19 relief funds under the second round of supplementary budget by the end of next month.

The fourth wave of COVID-19 infections that emerged last month has taken a toll on sales of small businesses which had been gradually recovering, chiefly in face-to-face service sectors such as food and hospitality.

“There is a need for fundamental support measures such as the creation of a new business model that allows small-business owners and self-employed people to have competitiveness even after the pandemic,” Hong said.

To help small-business owners develop new digital channels and stabilize their income, the government will encourage them to participate in the subscription-based economy market by supporting the development of platform vouchers and product bundling.