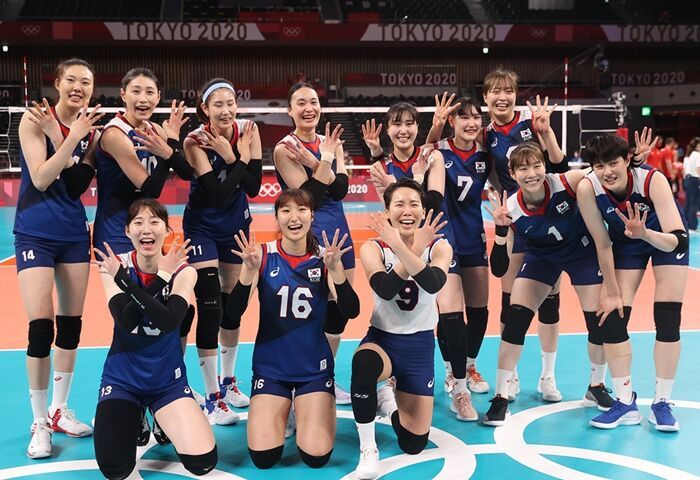 Members of the South Korean women's volleyball team celebrate their victory over Turkey in the quarterfinals of the Tokyo Olympic women's volleyball tournament at Ariake Arena in Tokyo on Wednesday. (Yonhap)
TOKYO -- When South Korean middle blocker Yang Hyo-jin sees her national team head coach Stefano Lavarini, she sees a bit of mad scientist in him.

"He spends so much time watching and studying videos (of opponents) to prepare for matches," Yang said Wednesday, moments after South Korea upset Turkey in five sets in the quarterfinals of the Tokyo Olympic women's volleyball tournament. "Before matches, he talks about how we should execute our game plan to a T in order for everything to fall into place.

"And that helps us stay prepared mentally, too," Yang went on. "We have to constantly think about every aspect of the game, be it defense, blocking or attack. And we were prepared against Turkey. I felt nothing in this world is free."

Yang led all players with six blocks in Wednesday's victory. She recently suffered a hand injury that affected her feel for blocks, but credited Lavarini with helping her right the ship.

"The coach has been pushing me and trying to steer me in the right direction," Yang added. "I was trying to figure out how to make it all work, and he has been really helpful."

Park Eun-jin, who provided some spark off the bench in the fifth set with some deft serving, said she only had to follow Lavarini's direction.

"He gave me signs and I tried to hit my serves according to those signs," she said. "I also wanted to target attacking players."

Lavarini said the emphasis on serves was by design, knowing that South Korea couldn't match Turkey power for power.

"We are skilled, we are good technically, and we know that we can count on our defense," he said. "But for sure, to play versus such good physical teams like Turkey at this international level, if we want to be competitive, we need to serve very strong. Serving is our first goal."

Lavarini said he doesn't stick to one particular set of strategies when it comes to serves and which players he puts in to take those serves. He keeps track not just of opponents to see which players are receiving better than others, but also of his own players' energy levels and body language. For all his focus on data, Lavarini also studies intangibles.

It's that kind of soft leadership that has brought together a locker room of eclectic characters, ranging from quiet, soft-spoken ones to more brash and rah-rah types.

"If they believe in what they can do, they can go really far. Everything is in their hands," Lavarini said. "We (as coaches) can only give them a little hand and a little more confidence in making them believe in it even more. We'll work together to reach the final." (Yonhap)