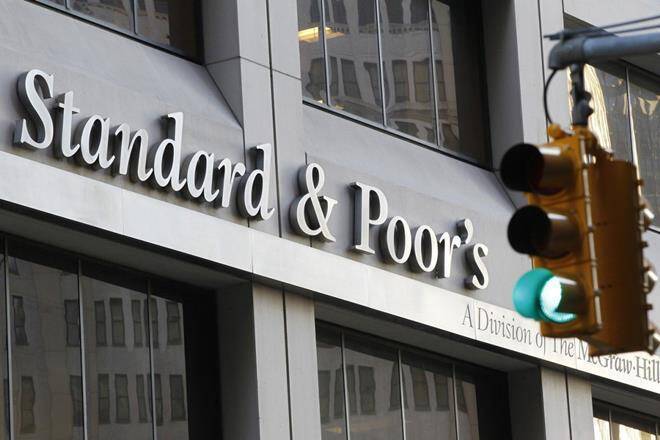 The S&P Global building in New York’s financial district is shown in this photo taken on Feb. 5, 2013. (Reuters)
Despite the fourth wave of the COVID-19 pandemic striking a blow to the South Korean economy, global credit appraiser S&P Global Ratings said it would keep the country’s economic growth rate outlook for 2021 and credit rating unchanged, citing robust exports.

The agency projected Asia’s fourth-largest economy to grow 4 percent and kept the credit rating at AA, same as estimates from last month and in April.

“Overall economic forecasts for South Korea are still looking fairly balanced. Certainly, the private demand side of the economy has weakened due to rising COVID-19 cases and the subsequent lockdowns. But it is balanced out by the continuing strong performance of the country’s trade sector,” Vishrut Rana, an economist specializing in the Asia-Pacific at S&P Global Ratings, said at a webinar on Wednesday.

Rana said Korea’s export growth remains strong since demand for semiconductors is considerably high on the back of the global chip shortage. But he expects a slowdown in export growth as global consumers are shifting their spending to services from durable goods on the expectation of a reopening of global economies.

Korea’s long-term sovereign credit was rated at AA, the third-highest level on the agency’s rating scale, keeping the same score since August 2016.

“The debt level is not particularly high in all sectors in South Korea. Its double matrix -- production and distribution -- has been performing better than most other countries. So for the moment, we still have a stable outlook for the rating,” said Kim Eng-tan, senior director at S&P Global Ratings.

S&P’s outlook, however, differed from other international institutions which on Tuesday revised down their forecasts for the country’s economic growth. Goldman Sachs lowered the rate from 4.5 percent to 4.1 percent. Barclays and Capital Economics each marked it down from 4.1 percent to 4 percent and 5 percent to 4.3 percent, respectively.