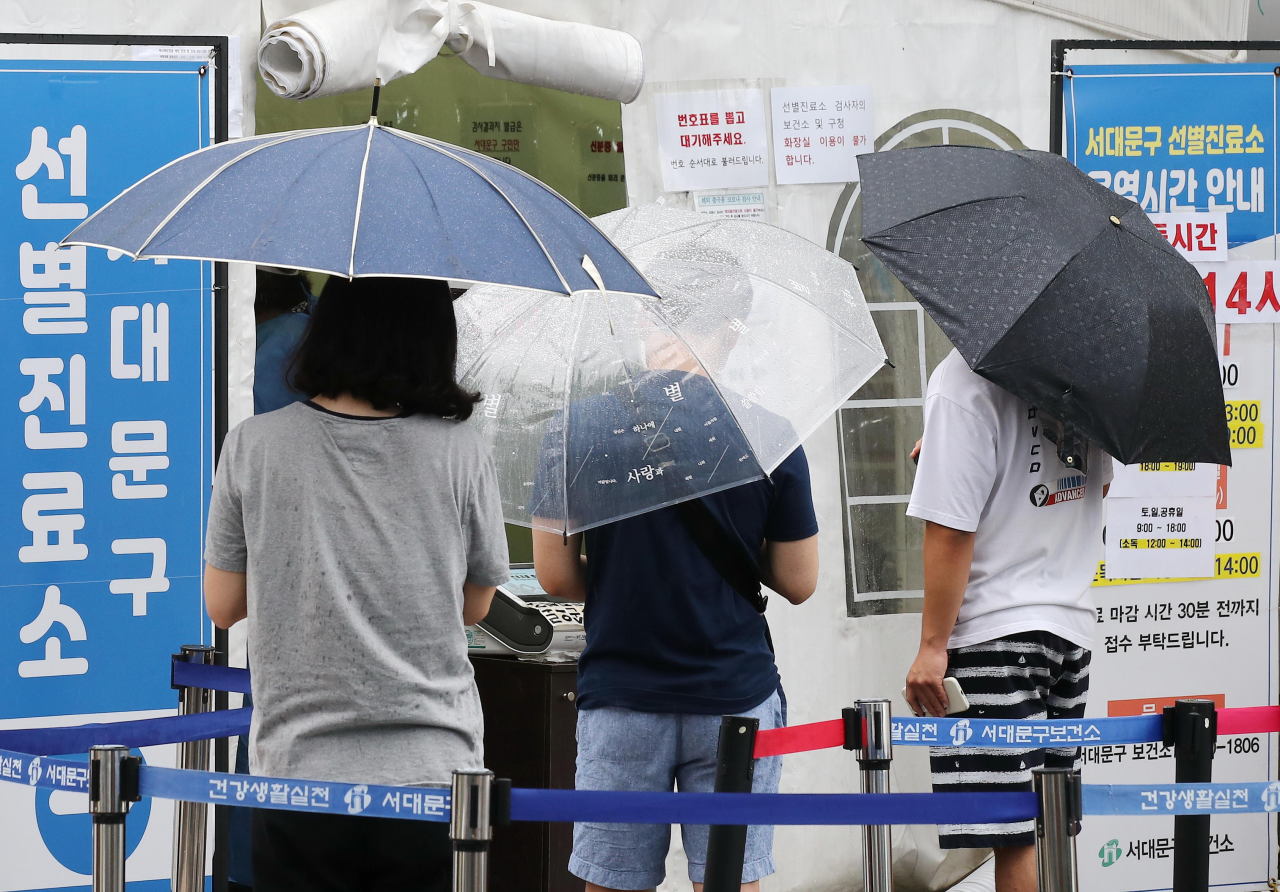 People wait in line to get tested for COVID-19 at a screening center in western Seoul on Sunday. (Yonhap)
The daily caseload has remained above 1,000 since July 7 due to outbreaks centered in the greater Seoul area.

Authorities, however, have been on high alert over a nationwide resurgence amid increasing travel during the summer vacation season and the spread of the highly contagious delta variant.

To slow down the recent rise in cases, health authorities have extended the highest measures of the country's four-tier social distancing scheme in the Seoul metropolitan area until this Sunday.

The toughest restrictions ban gatherings of more than two people after 6 p.m., place a 10 p.m. curfew on restaurants and cafes, and ban operations of nightclubs and other entertainment venues.

Areas outside the greater capital region are under Level 3 measures through Sunday, though some municipalities have adopted Level 4 measures to better contain the virus.

Under Level 3, cafes and restaurants can accept customers until 10 p.m., and only takeout and delivery services are available after that time. Private gatherings of five or more people are banned.

Health authorities are considering additional measures to contain the fourth wave if the situation shows no significant signs of slow down.

The KDCA is also working to speed up vaccinations, expanding inoculations to the younger population.

Nearly 18 million people aged 18-49 will receive their first jabs of vaccines from Pfizer and Moderna from Aug. 26 to Sept. 30.

As of Monday, a total of 19.47 million people, or 37.9 percent of the country's 51.3 million population, have received their first shots of COVID-19 vaccines, and 7.15 million people have been fully vaccinated, the KDCA said.

The country has so far administered vaccines to those aged 55 or over and priority groups, such as medical workers, since it started its vaccination campaign in late February.

South Korea aims to administer a single vaccination shot to 36 million people, or 70 percent of its population, by September with hopes of reaching herd immunity in November.

So far, a total of 117,762 cases of post-vaccination side effects have been reported, though 95.1 percent of them were found to be mild symptoms, such as muscle pain or fever. There have been 434 deaths after vaccinations.

The KDCA urged people to get vaccinated, citing data showing that 96.7 percent of 34,954 people who tested positive for COVID-19 in May and June were not vaccinated.

Those who received one vaccine dose accounted for 3 percent of the total, while those who were fully vaccinated represented just 0.3 percent.

The KDCA added that 93.5 percent of those in critical condition or who died from the virus were not vaccinated.

Of the 1,150 domestic cases, infections from non-capital areas reached 401, or 34.9 percent of the total, after rising to the 30 percent mark in mid-July.

The southeastern port city of Busan and the surrounding South Gyeongsang Province reported 68 and 77 cases, respectively.

New cases from overseas arrivals reached 69, up 13 rom the previous day, bringing the total to 12,020.

The total number of people released from quarantine after making full recoveries was 176,605, up 931 from a day earlier.

The number of patients in critical condition came to 326, a rise of two from the previous day. (Yonhap)