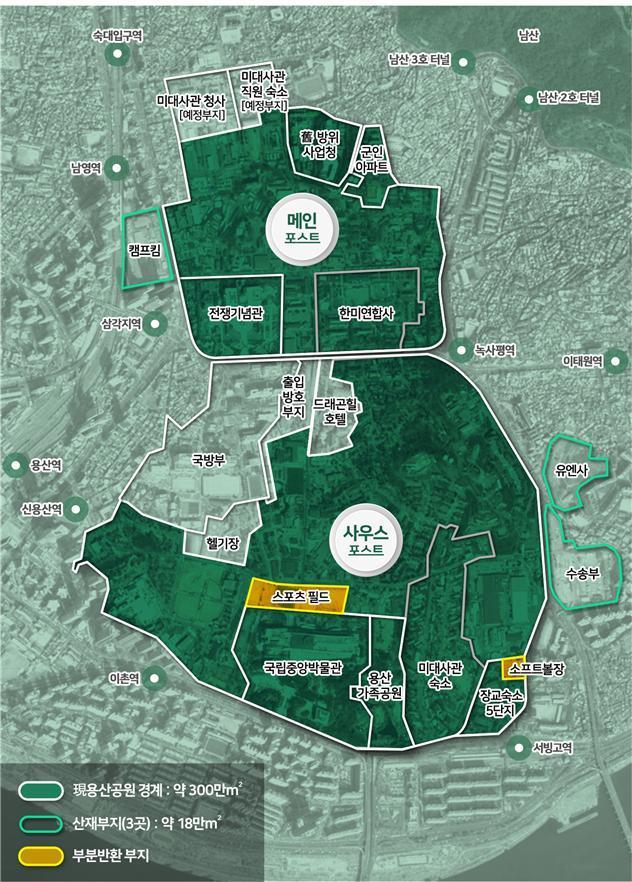 The area occupied by the US military in Yongsan is shown outlined in white. Areas to become part of Yongsan Park are shown in dark green. Areas in yellow indicate they have been returned to South Korea. (Yongsan-gu Office)
South Korea and the US have yet to reach consensus on clean-up costs for military bases that Washington is handing back to Seoul, despite years of talks, the first of which was held in 2002.

On Friday, the US military agreed to return about one-quarter of its Yongsan Garrison in central Seoul by early next year. This is the second time since last year the US military is giving up parts of its Yongsan base, the largest US installation here and one of 12 sites out of 80 it needs to hand over to Korea.

But Seoul is left wondering when it will take the remaining sites and if it could initiate development there, without a timeline to guide the projects, which involve putting up a signature park in Yongsan, like New York’s Central Park, and building residential and commercial facilities elsewhere.

Those plans have been essentially put on hold indefinitely until Seoul and Washington figure out how to burden clean-up costs and until the US military moves out to its new bases still under construction, according to Seoul officials familiar with the matter.

The discussion over clean-up costs has reached nowhere as Seoul and Washington have yet to adopt clear rules in their Status of Forces Agreement to determine how serious the base contamination is to public health.

The SOFA, which governs the 28,500-strong US military stationed here, says the US is not responsible for returning bases to the host country the way they were, unless there is a “known, imminent, substantial endangerment” to human health. The agreement does not elaborate on what that means.

Washington has rejected Seoul’s argument that the base contamination poses that risk, and their squabbling will not be resolved anytime soon, according to a senior official at the Ministry of Foreign Affairs.

“Disagreement will run its course. There is nothing other than patience to give a shot at compromise,” said the official who declined to be named because of the sensitivity of the matter.

He noted making the SOFA clearer on what endangerment means and what the parties should do in response is the priority, though he refrained from saying whether any revisions could actually take place. The US is seen as reluctant to introduce any changes to the agreement.

The US was not entirely ruling out an environment study, and there is still room for negotiation, the official added. But he admitted that the latest handover Friday saw little progress on that discussion.

So far, Seoul has spent at least $190 million cleaning up 24 military sites Washington returned, and plans to discuss costs with the US military as it retakes more sites.


No space for relocating troops

The US military, which still occupies much of Yongsan Garrison, has no place to move its troops in Seoul because facilities are still being built to accommodate them at the new, sprawling Camp Humphreys in Pyeongtaek, Gyeonggi Province.

The new US military headquarters started accepting troops in 2017 but runs short of spaces to accommodate more of them from Yonsgsan Garrison, who mostly work at the Combined Forces Command the two allies have run in the capital since 1978.

“We need facilities at Camp Humphreys to be ready but they aren’t quite there yet,” the Foreign Ministry official said.

An official at the Ministry of National Defense, which has been in charge of building those facilities since 2006, said there might be reasons for the delay.

“The CFC in Yongsan is more than just a command. It’s a symbolic bond that brings together Korea and the US. Taking it out could naturally take time to rethink options until the last minute,” the official said, adding however he believed relocation will take place eventually.

The Defense Ministry was emphatic that there were no delays that affected construction at the new US military headquarters, saying everything has been running smoothly and on schedule.

“We have not seen and are not seeing any impediment to relocating the Combined Forces Command in Yongsan,” the ministry said without elaborating.

Yongsan Park was scheduled to open by 2027, with many other areas left by the US military expected to go through redevelopment.