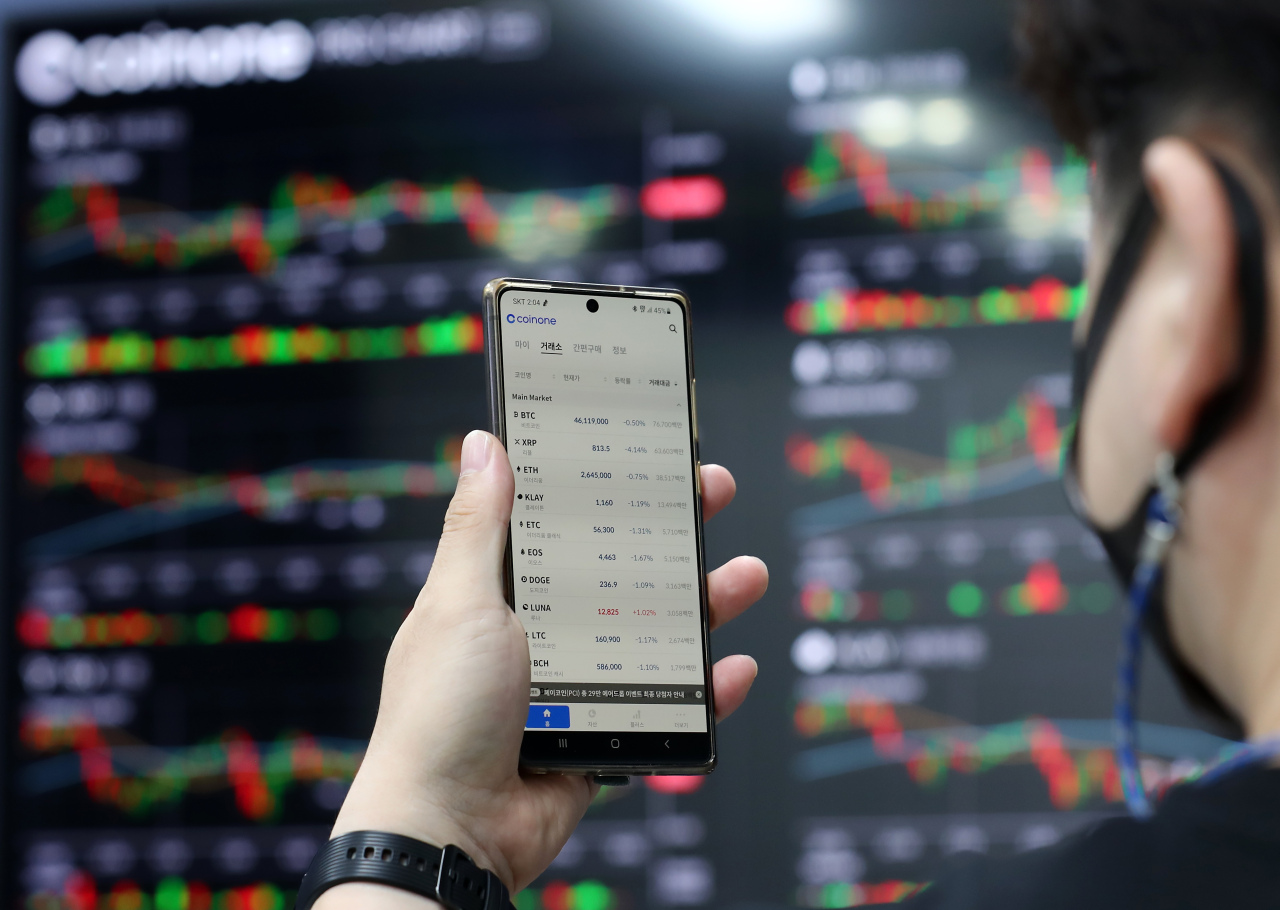 A Coinone employee looks at the cryptocurrency application at the Coinone customer service center in Yongsan-gu, Seoul. (Yonhap)
Mid-sized local cryptocurrency exchanges in Korea are shutting down as the country’s finance regulator has caught some of their illegal activities recently, and stricter regulations are to be implemented to allow their business operations, industry sources said Sunday.

According to the sources, the 11 exchanges that have used fraudulent collective accounts will most likely close business as Financial Services Commission plans to stop their transaction and notify illegal activities to the prosecution and the police.

The names of the exchanges were not disclosed yet, however, it will be impossible for them to get approval for operation by FSC, industry sources said.

Industry observers have predicted a chain closure of crypto exchanges later this year since most of the exchanges -- except the crypto giants Upbit, Bithumb, Coinone and Korbit -- have failed to open up real-name accounts for customers, which is a prerequisite for business operation. Additionally, several mid-sized exchanges have announced plans to shut down their services or business.

Darlbit went out of business on July 15 after notifying customers earlier last month that it would stop deposit and withdrawal services.

CPDAX also said Friday it will shut down services as of September 1. “It is not a temporary but a permanent measure to close business. Those who possess cryptocurrencies in the account must withdraw them before 3:00 p.m. on August 31,” the company said.

Bitsonic announced via its official Telegram messenger channel on Friday it will temporarily stop providing services in a bid to renew service systems.

“Once we are done with the renewal, we expect to achieve Information Security Management System,” the company said.

ISMS is a set of procedures to manage customer’s data by pro-actively limiting any security breach. It is another prerequisite needed for exchanges to operate in Korea. But questions remain whether it is a temporary shutdown measure.

Local exchanges must finalize getting approval from the FSC by September 24 for business operation. But the company said it will get ISMS only after it pauses services from August 6 to November 30. Since the timeline does not add up and it takes a considerable amount of time to achieve ISMS, Bitsonic is in de facto shutdown, according to market insiders.

Meanwhile, People Power Party Congresswoman Cho Myeong-hee is in the move to extend the reporting period of local exchanges open for business until December 24. However, financial authorities recently said it stands by the original plan to finalize the process by September 24, for it has already given 6 months of grace period since March.