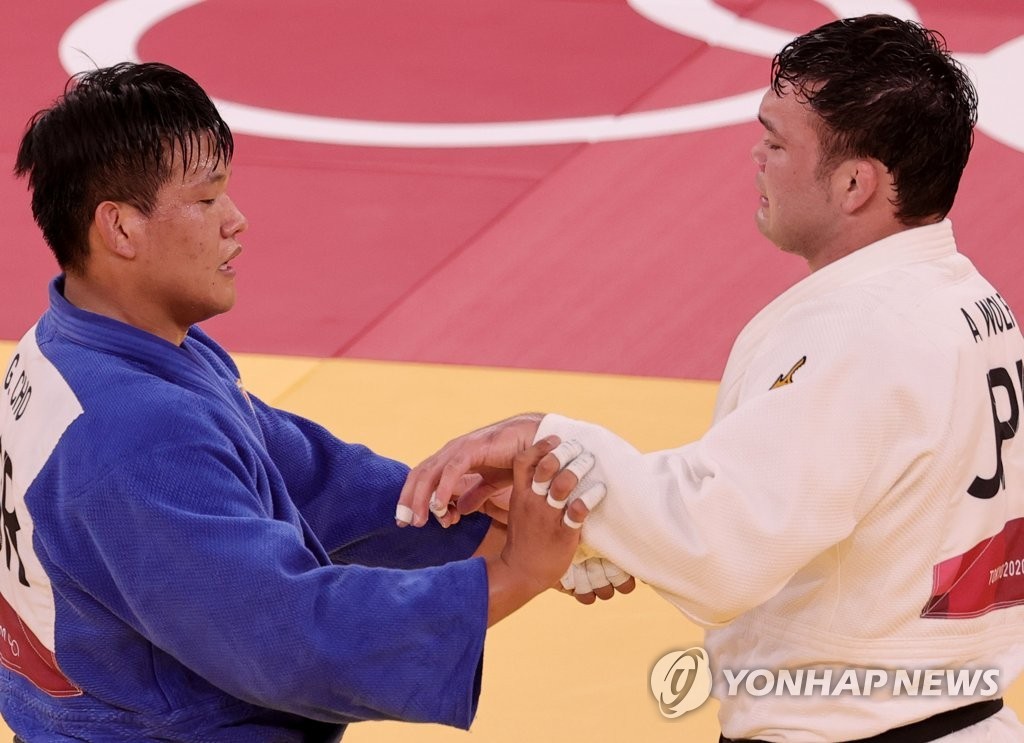 Cho Guham of South Korea (L) holds the hands of Aaron Wolf of Japan after the final match of the men's 100kg judo contest in the Tokyo Olympics on July 29, 2021. (Yonhap)

In a message for Cho Guham, Moon thanked him for bringing great joy to the people by winning a silver medal in the men's 100kg judo contest.

Moon mentioned his final match with Aaron Wolf of Japan the previous day.

"It was a game where your speed, endurance and manners shined,"
the president noted in the message also posted on social media.

Moon also congratulated the members of the male fencing squad on winning gold.

"I am more proud of you now that it represents a splendid achievement" as the second straight gold of South Korea's Olympic sabre fencing team, he added in a note each for Kim Jung-hwan, Gu Bon-gil, Kim Jun-ho and Oh Sang-uk.

Moon praised female archer An San for becoming the first South Korean triple gold medalist at a Summer Olympics and the first athlete with three gold medals at Tokyo.

The president also expressed support for An, who recently became a target of vicious online attacks for keeping her hair short, mostly coming from those who believed her look meant she was a feminist.

"Behind an individual's great performance lie repeated trainings and deep solitude. Sometimes, they have to fight against too much expectations and discrimination," Moon said in a message posted on social media. "We often focus on end results, but there is no easy moment in the journey. I'm so proud of her." (Yonhap)