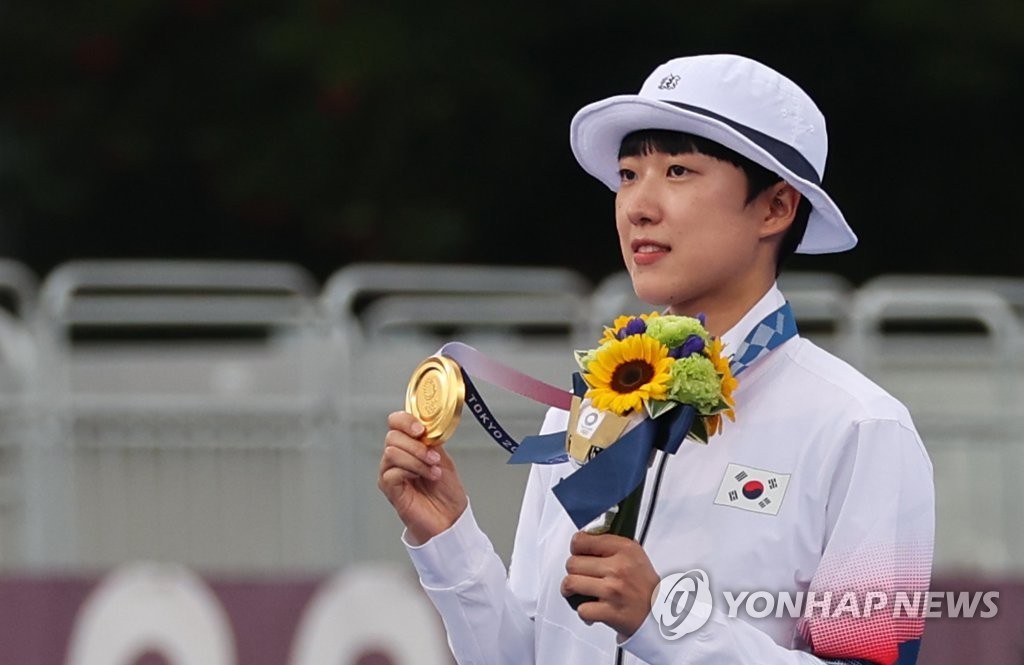 An San of South Korea holds up her gold medal from the women's individual archery event at the Tokyo Olympics at Yumenoshima Park Archery Field in Tokyo on July 30, 2021. (Yonhap)

The archery broadcast for the Tokyo Olympics this year has added a new feature, with a small bug at the bottom left corner showing archers' heart rates.

South Korean archer An San, who won her third gold medal here with the women's individual title on Friday, mostly sat around the 80s, which is in the perfectly normal range and is shockingly low for an athlete in the heat of an Olympic competition.

Her opponents on this day, on the other hand, had their beats per minute reading around 140 to 160, the kind of numbers you'd get after a hard run on a treadmill for about 20 minutes.

Even in the final against Elena Osipova of the Russian Olympic Committee, An's bpm never hovered over 120. An's heart rate reached as high as 115 and, as she shot her arrow, it would fall to below 110.

Osipova's bpm reading went all the way up to 152 at one point.

Given the seeming ease with which An swept up all women's archery gold medals here, it was difficult to believe the 20-year-old was making her Olympic debut.

With two gold medals already in the bag from the mixed team and women's team event, An didn't put any pressure on herself to make history with the third one.

"I wasn't all that nervous. I was having fun out there," An said. "Whenever I was about to get nervous, I tried to smile more and shake off jitters."

As for the low bpm numbers, An said, "I felt like my heart was beating pretty fast. Maybe the numbers didn't show it on the screen."

An went through two sudden-death shoot-offs en route to the top of the podium. She squeezed past Mackenzie Brown of the United States in the semifinals with a 10-9 advantage in the shoot-off. In the final, An shot a 10 to Osipova's 8 in the deciding shoot-off.

Ahead of the last shoot-off, An had this message to herself: "Don't be scared. Just go and shoot."

An's opponents and her teammates marveled at the young athlete's ability to maintain a stoic exterior in the heat of the battles. But An said she does have a sensitive side, which revealed itself when she shed tears on the podium during the medal ceremony.

An is now the first triple gold medalist of the Tokyo Olympics and the first archer to win three gold medals at a single Olympics.

She is the first South Korean athlete to reach the top of the podium three times at one Summer Games.

The list of accomplishments is already long and will likely only grow from here. But the magnitude of what she had just done was mostly lost on An.

"It still hasn't hit me yet," An said. "I feel like I have another competition tomorrow." (Yonhap)