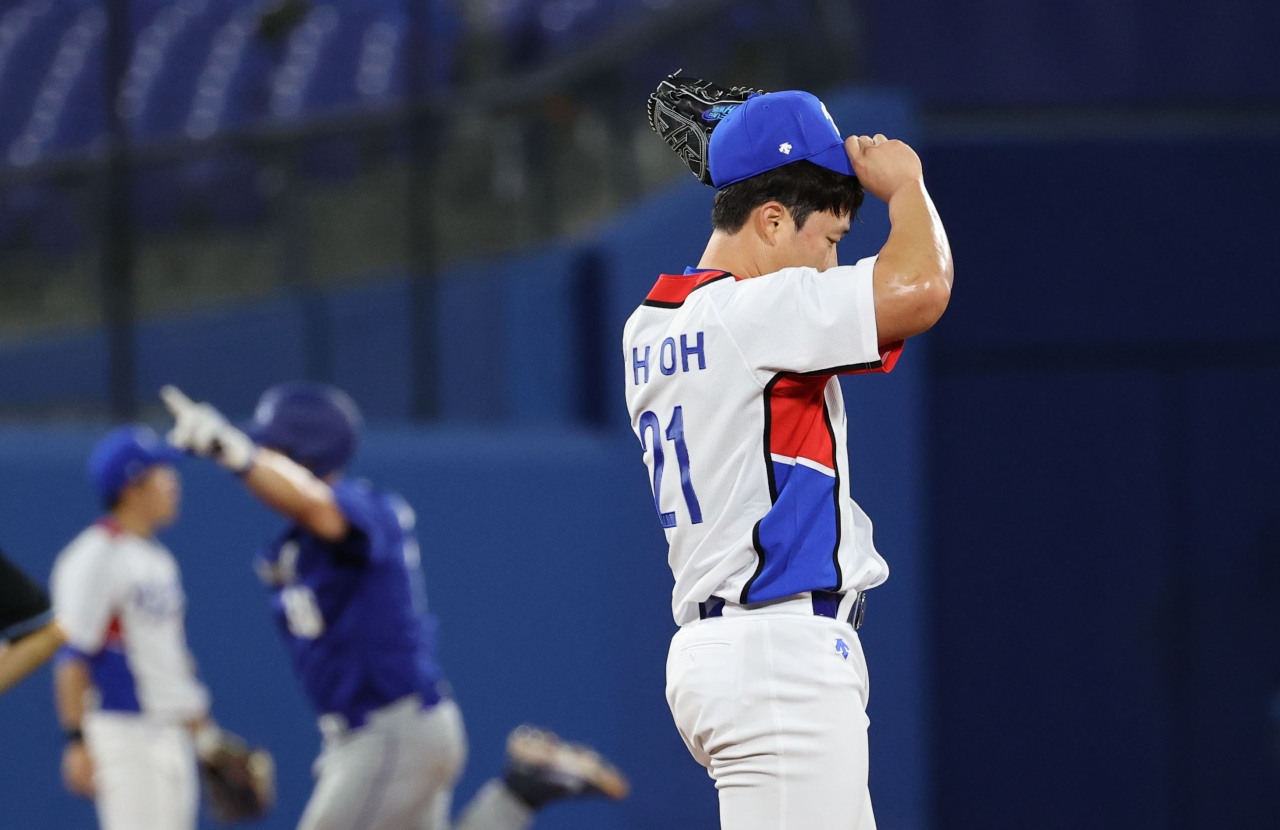 Oh Seung-hwan of South Korea reacts to a solo home run hit by Ryan Lavarnway of Israel in the top of the ninth inning of the teams' Group B game in the Tokyo Olympic baseball tournament at Yokohama Stadium in Yokohama, Japan, on Thursday. (Yonhap)
YOKOHAMA -- After serving up a game-tying solo home run to Israel in the top of the ninth inning to blow a 5-4 lead for South Korea on Thursday, closer Oh Seung-hwan wore an incredulous smile on his face that said, "Oh no, not again."

Welcome to Yokohama Stadium, home of the baseball tournament for the Tokyo Olympics.

It's a smallish park, stretching 94 meters down the lines and 118 meters to dead center. And the wind was blowing out on this night, and South Korea and Israel had three home runs apiece.

Ryan Lavarnway had a pair for Israel, including the ninth inning blast. Four-time major league All-Star Ian Kinsler left yard, too. Kinsler's shot came against South Korean starter Won Tae-in, who struck out the first four batters he faced before the bottom fell out on him.

And for South Korea, two lightweights went deep: outfielder Lee Jung-hoo (three home runs in 79 games in the South Korean league) and shortstop Oh Ji-hwan (five homers in 66 games), along with Kim Hyun-soo, who has hit 20 or more homers in a season five times.

Oh Seung-hwan, having pitched for the Hanshin Tigers in Japan from 2014 to 2015, is all too familiar with the stadium. The Tigers are in the same Central League as the Yokohama DeNA BayStars in the Nippon Professional Baseball (NPB).

"We have to be careful not to make mistakes here. This is a hitter-friendly stadium," Oh said. "I knew this ballpark would yield a lot of home runs, and I told the guys about that, too. We have to figure out ways to keep the ball in the park."

Oh Ji-hwan's two-run homer in the bottom fourth was a line drive shot that just cleared the fence down the right field line. His double that put South Korea up 5-4 in the seventh one-hopped off the wall in right-center.

"There were some balls that I thought would be caught but ended up in the seats instead," Oh said.

Lee said the windy conditions didn't make his life as an outfielder as difficult as he'd feared.

"We're here to win the gold medal," Lee said. "So we're not going to worry too much about elements and other issues." (Yonhap)