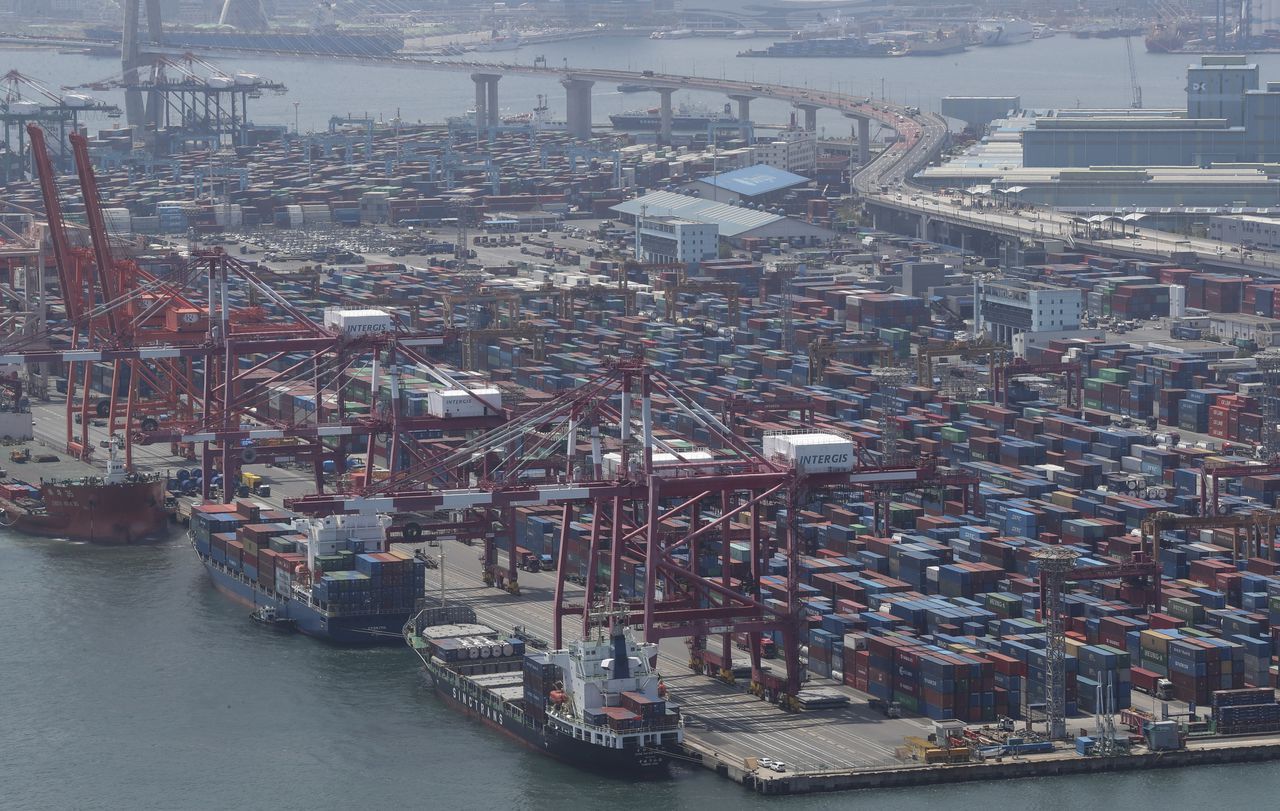 This file photo, taken July 1, 2021, shows ships carrying containers docking at a port in the southeastern city of Busan. (Yonhap)

South Korea's industrial output and retail sales increased in June from the previous month in the latest sign that Asia's fourth-largest economy is on a solid recovery track, data showed Friday.

But the fourth wave of the pandemic is posing a threat to the country's economic recovery as the toughest-ever virus curbs may dampen improving domestic demand.

Industrial output rose 1.6 percent in June from the previous month, after stayed flat in May, according to the data compiled by Statistics Korea.

From a year earlier, it increased 6.7 percent.

Production in the manufacturing and service sectors gained ground last month amid the economic recovery.

Retail sales, a gauge of private spending, rebounded in June after suffering the biggest fall in 10 months in May.

Retail sales increased 1.4 percent from a month earlier, a turnaround from a 1.8 percent on-month fall in May, the data showed.

The rebound came as sales of summer clothes rose and people increased economic activity amid the vaccine rollout.

A total of 18.73 million people, or 36.5 percent of the country's 51.3 million population, have received their first shots of COVID-19 vaccines, and 7.06 million people have been fully vaccinated, according to health authorities.

South Korea aims to inoculate 70 percent of its population with one vaccine dose by September to reach herd immunity in November.

As the June data did not reflect the fallout of the latest spiking COVID-19 cases, economic indicators for this month may point to some slumps.

"But the recent flare-up in COVID-19 cases and the enforcement of the toughest-ever virus curbs have heightened economic uncertainty," he added.

The finance ministry said the current wave of the pandemic is feared to dampen consumer and business sentiment, potentially hampering reviving domestic demand.

Eo said negative economic impacts from the latest virus resurgence may not be big compared with those from previous waves of the pandemic in light of people's efforts to adapt to the situation.

The country is grappling with the fourth wave of the pandemic, as its daily new cases topped 1,000 for the 24th straight day. The country added 1,710 COVID-19 cases Friday, raising the total to 196,806.

Under the toughest virus curbs, private gatherings of three or more people will be banned after 6 p.m. and entertainment establishments, including night clubs and bars, will be ordered to shut down.

The South Korean economy is on a recovery track on the back of solid exports and improving domestic demand. It contracted 0.9 percent last year due to the fallout of the pandemic.

Exports rose 32.8 percent on-year in the first 20 days of July on strong demand for chips, autos and petroleum products, according to customs data. Overseas shipments extended their gains to the eighth straight month in June.

The government raised its 2021 growth outlook for the country's economy to 4.2 percent, up from its earlier estimate of 3.2 percent. The Bank of Korea forecast 4 percent growth for this year. (Yonhap)