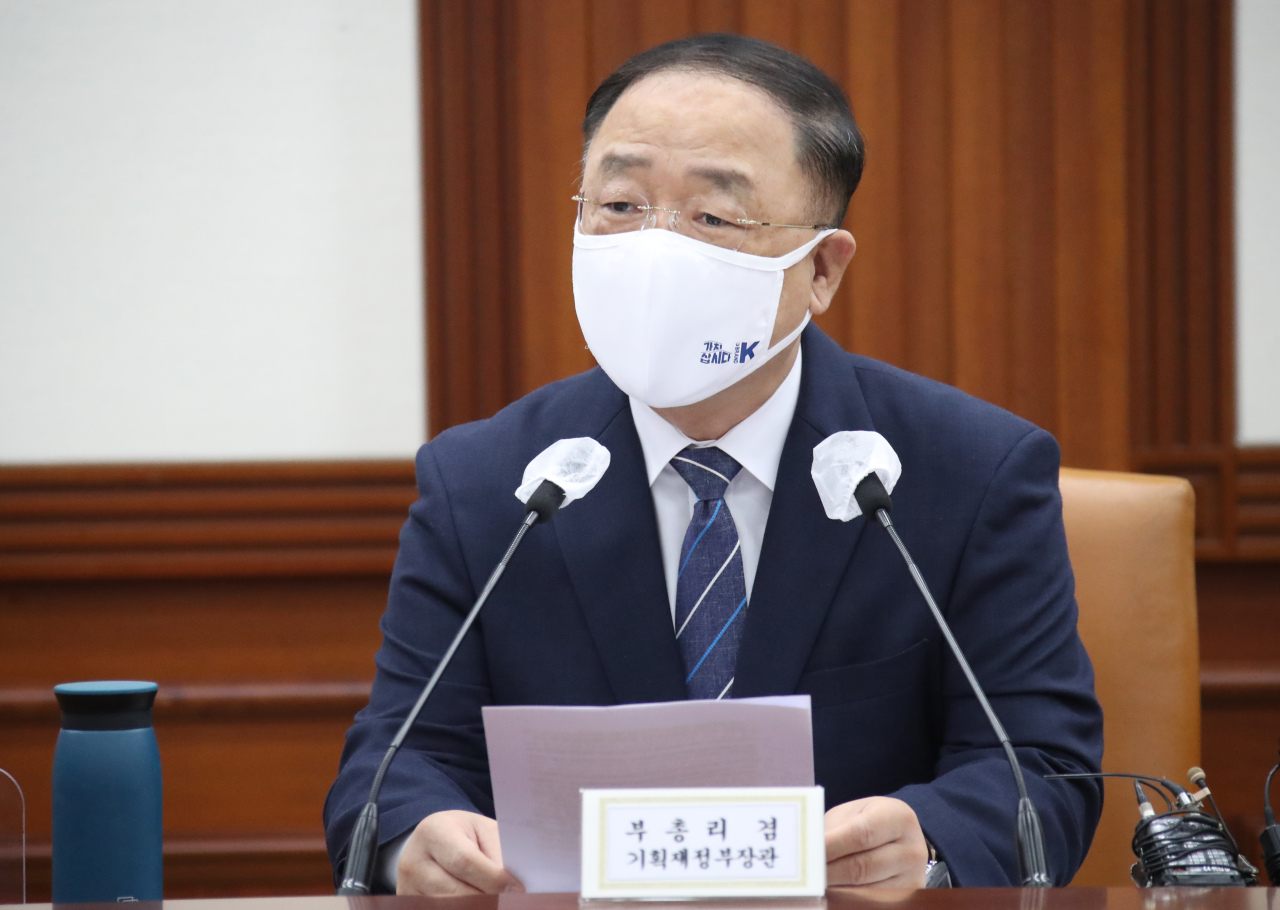 Finance Minister and Deputy Prime Minister Hong Nam-ki attends a meeting on the "Big 3" industries at the government complex in Seoul on Thursday. (Yonhap)
South Korea plans invest over 5 trillion won ($4.3 billion) in semiconductors, biohealth and next-generation vehicles next year and provide them the latest tax benefits ahead of other industries, the nation’s fiscal policy chief said Thursday.

The size of next year’s fiscal support for the industries dubbed the “Big 3” will be larger than this year’s corresponding figure of some 4.2 trillion won.

Finance Minister and Deputy Prime Minister Hong Nam-ki pointed out that the “Big 3” industries are at the core of key agendas that the global economies have been pursuing in the COVID era including overhaul of the global value chains, transition into a digital and green society and the race towards future technologies and industries.

To bolster tax benefits for the industries, the government recently announced a tax reform bill that would expand the current 1.16 trillion won worth of incentives for research and development and infrastructure investment. The government plans to submit the tax code revision bill to the National Assembly before Sept. 3 for approval, but Hong said that the “Big 3” industries will start receiving the benefits in the second-half of the year, handing them priority seats.

The key agendas tied to the “Big 3” industries during the meeting held in the morning were bolstering the supply of EV and hydrogen-powered car chargers, local production of chips and development of artificial blood substitutes.

As of June, South Korea operated some 72,000 EV chargers and 110 hydrogen fuel cell vehicle chargers across the nation, and Hong plans to increase the numbers by 2025.

It plans to install more than 12,000 fast chargers at highway rest areas and over 500,000 standard ones in cities in the cited period. Over 70 charging stations for hydrogen fuel cell cars will be installed in the second half of this year increasing the total number to 180 by the year-end.

To further improve domestic production of chips, the establishment of ultrapure water system here, which currently heavily relies on foreign partnerships, will be pursued. Recycling of semiconductor wastewaters, which are considered inherently difficult to treat, will be expanded as well.

On development of artificial blood substitutes, the government aims to procure the technology and make actual synthetic blood transfusion possible by 2030. The government plans to partner up with local institutions including the state-run National Center for Stem Cells and Regenerative Medicine to kick-off the project.