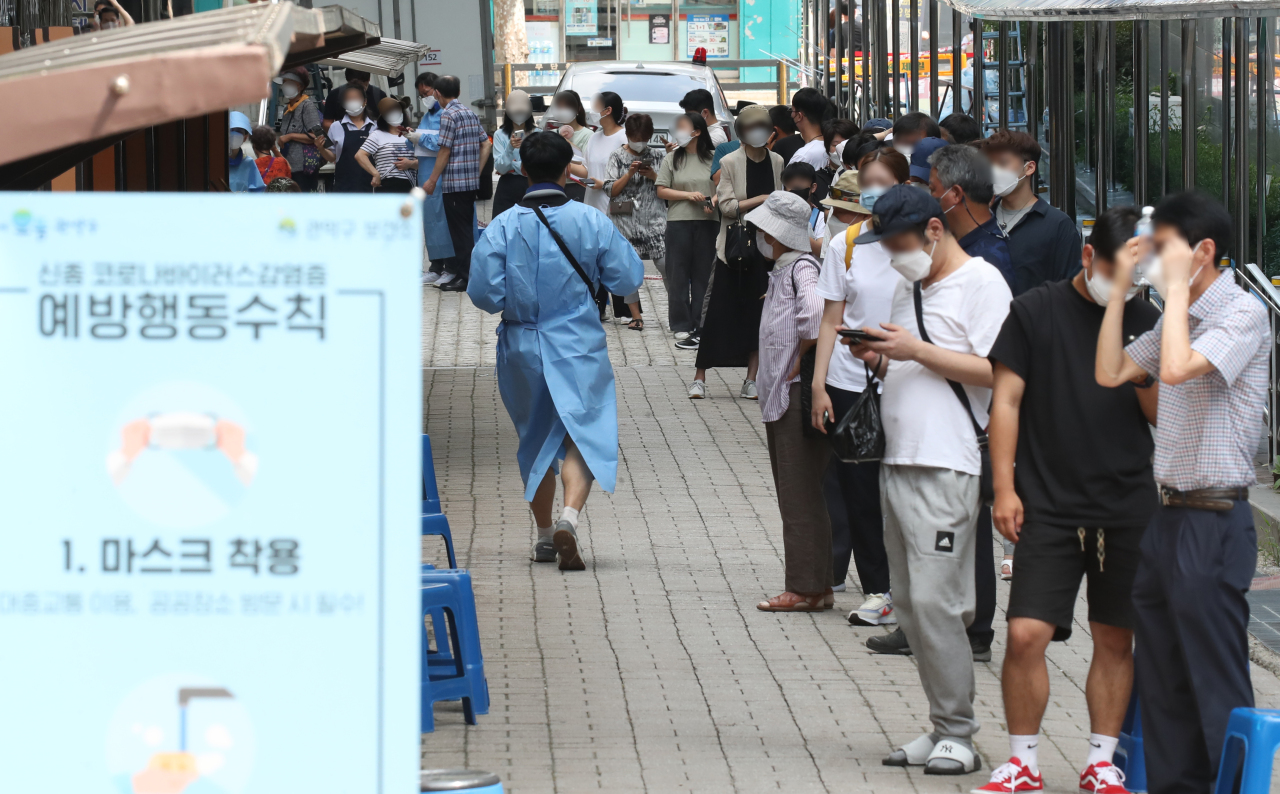 People wait in line to get tested for COVID-19 at a screening center in southern Seoul on Wednesday. (Yonhap)
South Korea's daily new coronavirus cases fell slightly Thursday after reaching a record high the previous day as health authorities weigh implementing more virus restrictions to slow down the spread of the delta variant and growing infections outside the greater Seoul area.

The country added 1,674 COVID-19 cases, including 1,632 local infections, raising the total caseload to 195,099, according to the Korea Disease Control and Prevention Agency (KDCA).

The latest tally is a fall from a record 1,896 COVID-19 cases reported Wednesday but higher than 1,365 cases Tuesday.

Cases have been well above the 1,000 mark since early this month amid the country's fourth wave of the pandemic.

Health authorities worry that the fourth wave may not have peaked yet, considering growing cases of the highly transmissible delta variant despite strict virus restrictions.

To stem the spread of the virus, South Korea has extended the highest social distancing measures of Level 4 in the Seoul metropolitan area, the nation's virus hot spot in recent weeks, until Aug. 8.

The toughest restrictions ban gatherings of more than two people after 6 p.m., place a 10 p.m. curfew on restaurants and cafes, and ban nightclubs and other entertainment venues.

Areas outside the wider capital region are under Level 3 measures through Aug. 8, though some municipalities have adopted Level 4 measures to better contain the virus.

Under Level 3, cafes and restaurants can accept customers until 10 p.m., and only takeout and delivery services are available after that time. Private gatherings of five or more people are banned, while mass-gathering events must accommodate fewer than 50 people.

Health authorities have said they will review a plan to implement stricter virus curbs if current distancing rules do not seem to improve the country's virus situation.

South Korea is also working to boost its vaccination drive by expanding inoculations to the younger population.

A total of 18.38 million people, or 35.8 percent of the country's 51.3 million population, have received their first shots of COVID-19 vaccines, and 7.02 million people have been fully vaccinated, the KDCA said.

Of the 1,632 domestic cases, infections from non-capital areas reached 570, or 34.9 percent of the total, after rising to the 30 percent mark in mid-July.

The southeastern port city of Busan and the surrounding South Gyeongsang Province reported 81 and 90 cases, respectively.

In the capital area, Seoul reported 508, while the surrounding Gyeonggi Province added 460. The western port city of Incheon confirmed 94 cases.

New cases from overseas arrivals reached 42, bringing the total to 11,775.

The total number of people released from quarantine after making full recoveries was 171,559, up 1,065 from a day earlier.

The number of patients in critical condition came to 285, down one from the previous day. (Yonhap)