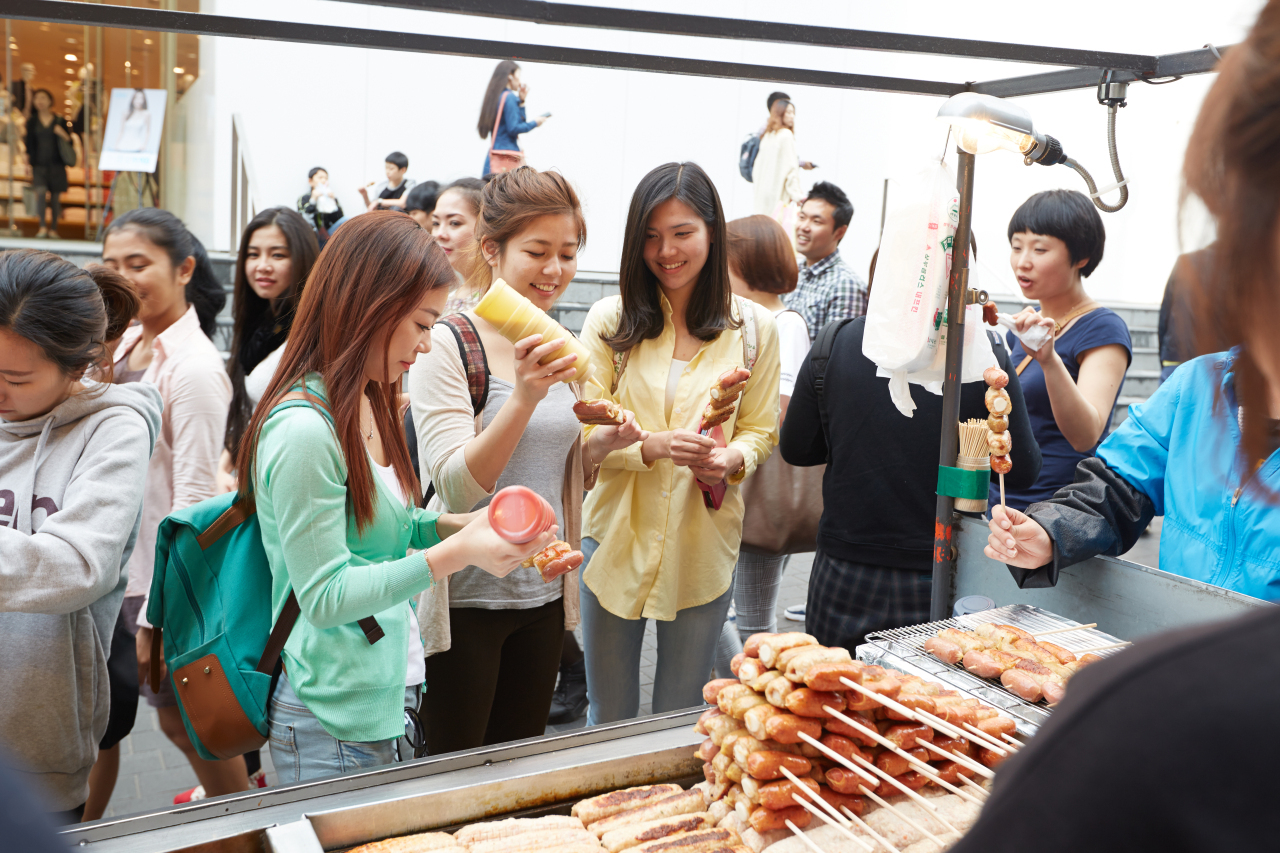 Tourists from abroad try food at a street stall in Seoul. (Korea Tourism Organization)
The number of foreigners in South Korea decreased for a consecutive 19 months amid the pandemic to its lowest in five years and six months in June, according to statistics released by the Korea Immigration Service under the Justice Ministry.

The foreign population in Korea stood at about 1.98 million in June, 0.3 percent less compared to May, and the lowest since December 2015 (1.89 million).

In March last year, foreign nationals staying in the country dropped below 2 million for the first time in five years and three months.

The number of foreigners on short-term stay declined more sharply than those residing for long term.

The number of long-term foreign residents also dipped 6.7 percent year-on-year to less than 1.57 million in June.

Among those staying long term, 1.09 million had alien registration cards in June, down 10.1 percent compared to a year ago, and the lowest since the number went over 1 million for the first time in 2014 (1.09 million).

Foreigners are required to apply for alien registration cards in order to reside here for more than three months.

The number of foreigners staying in Korea as of the end of last year fell by nearly 500,000 from a year ago amid the pandemic.

Statistics released by the Justice Ministry earlier this month showed that while the foreign population in Korea tumbled from 2.52 million at the end of 2019 to 2.03 million by the end of 2020, the number of those residing as spouses of Korean nationals continued to grow.

Foreign spouses of Korean nationals living in the country, whom the Justice Ministry calls “marriage immigrants,” rose by 2,569 year-on-year to 168,594 by the end of last year.

With the strictest Level 4 social distancing measures in place to curb the spread of the virus, the Korea Immigration Service has halted several services for foreigners or has moved them online.

Less than half of the immigration and foreigner service counters across the country have been open since last week, and available time slots for handling naturalization and reacquisition of nationality have been reduced to half until Sept. 30.

The Seoul Immigration Office’s program for guidance on international marriages for Koreans planning to marry foreigners has gone online.

The Korea Immigration Service Foundation has temporarily suspended a program that helps foreigners settle in Korea.

Most of the support centers for multicultural families in the Seoul metropolitan area have also moved online.

Separately, the Incheon Support Center for Foreign Workers called for caution as the number of foreign workers infected with COVID-19 has grown lately.

“We have received reports of violations of disease prevention rules in workplaces that employ foreign workers,” a center official said, advising migrant workers to refrain from unnecessary travel and gatherings, and follow disease prevention guidelines at their workplace and living quarters.