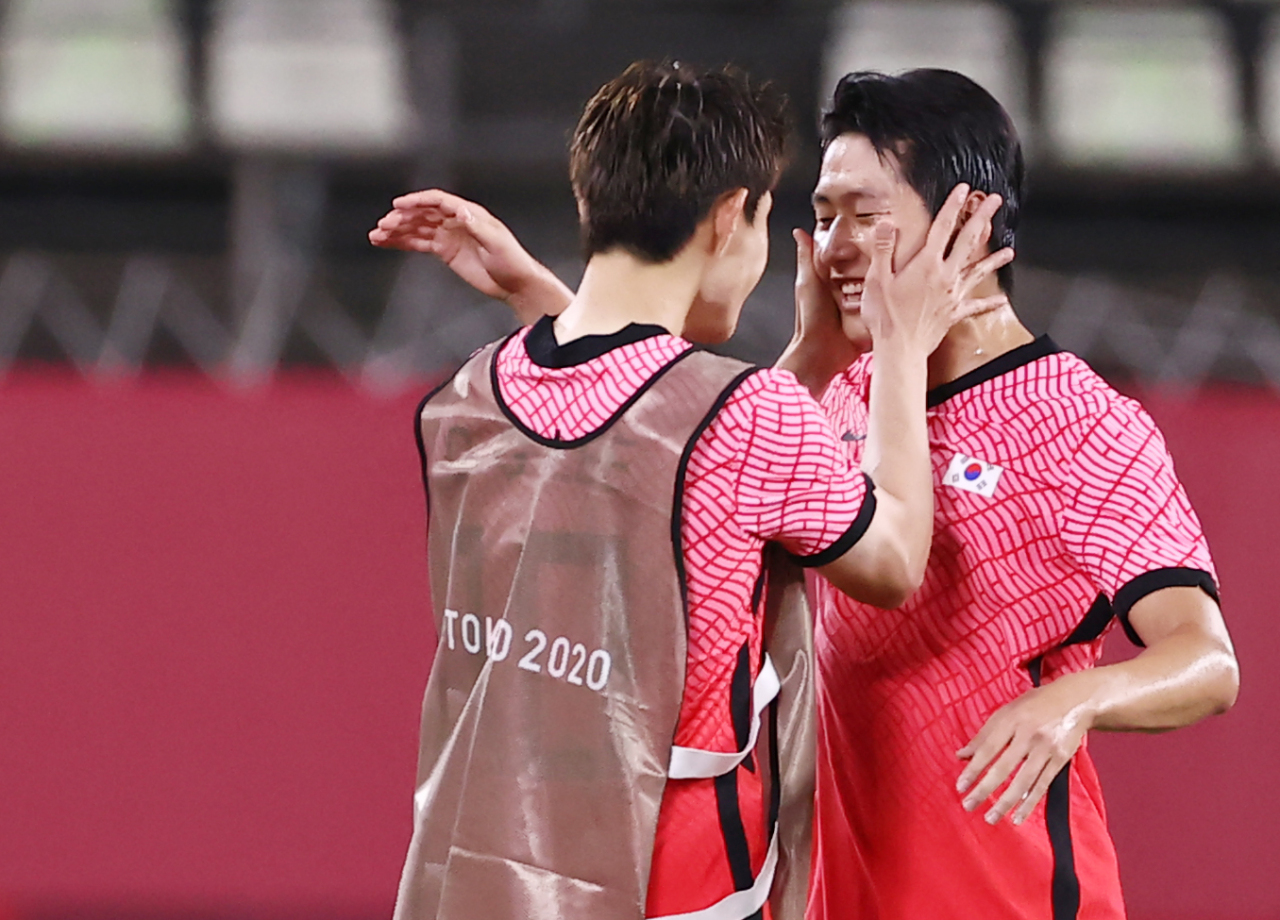 South Korean midfielder Lee Kang-in (right) is greeted by his team colleague Lee Dong-kyung after South Korean national team beat Romania 4-0 in Tokyo Olympics on Sunday. (Yonhap)
TOKYO -- South Korea jumped to the top of Group B in the Tokyo Olympic men's football tournament with a 4-0 victory over Romania on Sunday.

Midfielder Lee Kang-in grabbed a brace against the 10-man Romania at Ibaraki Kashima Stadium in Kashima, about 110 kilometers northeast of Tokyo, for South Korea's first victory of the competition.

A Romanian own goal and a second-half score by Um Won-sang gave South Korea more than enough offense.

South Korea, which lost to New Zealand 1-0 in last week's opener, improved to three points. Honduras, New Zealand and Romania all have three points apiece, but South Korea have the best goal difference among them at plus-3.

To finish among the top two and qualify for the quarterfinals, South Korea will only need a draw against Honduras in the final group match at 5:30 p.m. Wednesday at International Stadium Yokohama in Yokohama, south of Tokyo.

South Korea lost to Honduras in the quarterfinals of the 2016 Olympics in Rio de Janeiro.

The first goal of the match came in the 27th minute, when Lee Dong-jun's cross intended for Hwang Ui-jo went into the net off the right foot of defender Marius Marin.

South Korea dodged a huge bullet in the 32nd minute. Goalkeeper Song Bum-keun grabbed a back pass from teammate Won Du-jae, mistakenly thinking the ball had come off a Romanian player.

Romania were awarded an indirect free kick near the goalmouth, and Song managed to stop a hard shot by Andrei Ciobanu.

Romania went down a man when Ion Gheorghe picked up his second yellow card of the match in the 45th minute for elbowing Kang Yoon-seong.

Holding the man advantage to open the second half, South Korea kept pressing for more goals. It took them nearly 40 minutes into the second half before Lee Kang-in converted a penalty, awarded when Seol Young-woo was fouled in the box.

Near the end of the match, Kang set up Lee to round out the scoring for South Korea. (Yonhap)