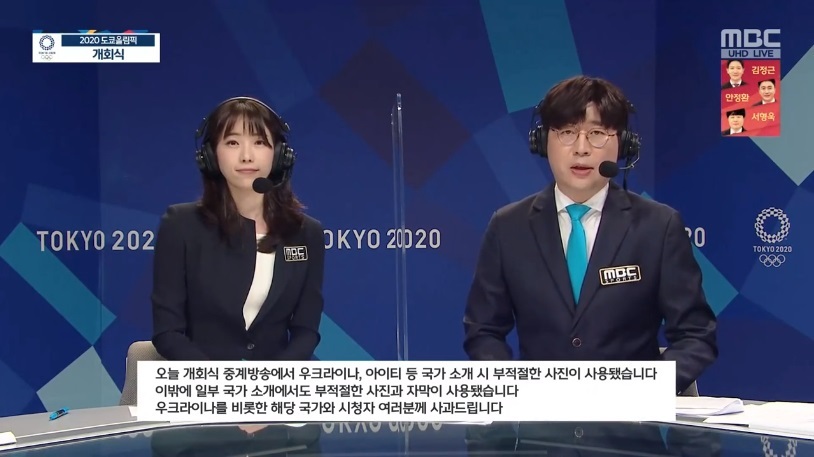 While broadcasting the parade of national teams in the virtually empty stadium, MBC showed images and captions introducing each delegation of athletes.

Several of the images were inappropriate and insensitive. As the Ukraine delegation marched in, MBC showed an image of the 1986 Chernobyl nuclear disaster. El Salvador was introduced with Bitcoin while the Cuban delegation was matched with a scene of social unrest in Cuba.

Some images exhibited cultural prejudice and national stereotypes, such as pizza for Italy, salmon for Norway, Dracula for Romania and sushi for Japan.

The broadcaster described Haiti as a “politically unstable country with the assassination of its president.” The Marshall Islands was introduced as “a former nuclear test site for the United States,” Syria as “a country with rich underground resources and 10 years of civil war” and Nauru as a “country experiencing economic decline with the depletion of its major natural resource phosphorite.”

During the parade of nations, the network also commented on the COVID-19 vaccination rate of some of the participating countries, including Afghanistan. 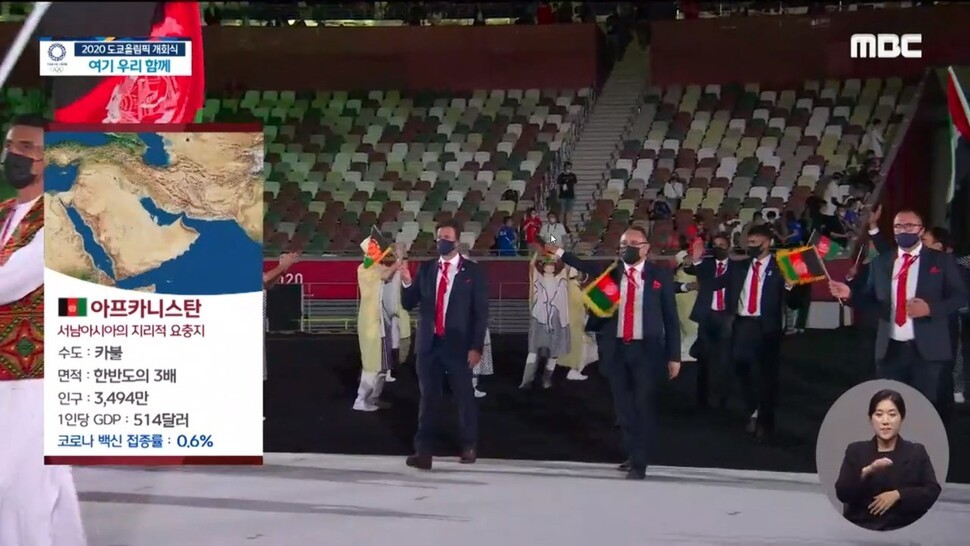 A screen capture shows MBC using a caption that describes the COVID-19 vaccination rate of Afghanistan during the Tokyo Olympics opening ceremony Friday. (MBC)
MBC apologized at the end of the broadcast, saying “inappropriate images and captions were used to introduce the participating countries.”

Despite the apology, viewers expressed outrage at the broadcaster’s callousness and errors in judgment, especially as it appeared to be a repeat of the broadcaster’s coverage of the opening ceremony for the 2008 Beijing Olympics.

On Saturday, MBC issued a formal apology in a press release. “We would like to apologize once more to the countries and their people who are offended by our broadcast for the Olympics opening ceremony,” the broadcaster said.

The company tried to introduce the countries in an easy-to-understand manner so that the viewers could easily remember them, according to MBC.

“We are aware of the fact that that we had no respect and consideration for the countries, and the content review process was wanting. MBC acknowledges the seriousness of the matter and promises not to repeat similar mistakes in the future by checking the company’s production system once more,” the broadcaster said.

“I was in shock watching the broadcast, thinking the incident could grow into a diplomatic issue with the countries concerned,” a 30-year-old game company employee surnamed Kim told The Korea Herald on Sunday. “MBC definitely brought international disgrace to itself and should be ashamed of its action.”

An image of the official apology on MBC website (MBC)
An online petition posted Friday on the Cheong Wa Dae website demanded strict investigation into identifying the person in charge of the fiasco at MBC.

In 2008, MBC was penalized by the Korea Communications Commission for disparaging countries participating in the 2008 Beijing Olympics with its captions.

In the opening ceremony of the 2008 Beijing Olympics, Sudan was described as an unstable country with a long civil war and Zimbabwe as a country with deadly inflation.