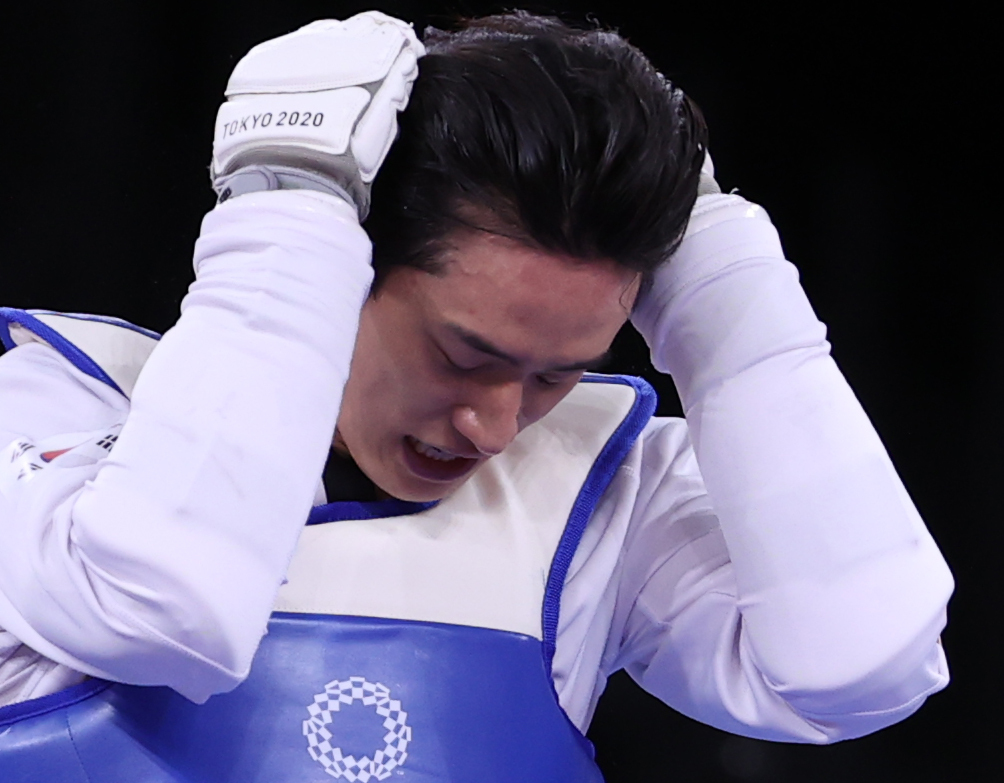 Lee Dae-hoon of South Korea reacts to his loss to Ulugbek Rashitov of Uzbekistan in the round of 16 match in the men's 68kg taekwondo event at the Tokyo Olympics at Makuhari Messe Hall A in Chiba, Japan, on Sunday. (Yonhap)
CHIBA -- South Korean taekwondo star Lee Dae-hoo suffered a shocking loss in his first match at the Tokyo Olympics on Sunday, missing out on his third and likely final crack at an Olympic gold.

Lee lost to Ulugbek Rashitov of Uzbekistan 21-19 in the round of 16 at the men's 68kg event at Makuhari Messe Hall A in Chiba, east of Tokyo.

The two practitioners were tied at 19-19 after three rounds, setting up the sudden-death extra period. Rashitov got his two "golden points" with a kick to Lee's body.

Lee can only sneak into the repechage if Rashitov reaches the gold medal match.

Lee, 29, is one of the most accomplished taekwondo practitioners of his generation, but an Olympic gold has proven elusive for the three-time world champion.

Lee won a silver in the 58kg class in his Olympic debut in 2012. He moved up to 68kg for the 2016 Olympics but took bronze. He became only the third South Korean taekwondo athlete to compete in three straight Olympics on Sunday, but the feat was overshadowed by the stunning defeat.

Lee came in ranked No. 1 in the world in his class, while Rashitov had just moved up from 58kg to 68kg. With no ranking position, he received the lowest seed, 17th.

The start of Round 3 was delayed due to a video replay, and Rashitov came out of the break on fire, taking a 19-18 lead.

Lee pulled into a tie with 11 seconds remaining but succumbed in the extra period.

The other taekwondo athlete in action Sunday, Lee Ahreum in the women's 57kg, suffered a 20-18 loss to Lo Chia-Ling of Chinese Taipei in the round of 16.

South Korea, the birthplace of taekwondo, is off to a shaky start in its Tokyo campaign. On Saturday, Jang Jun, a heavy gold medal favorite in the men's 58kg, settled for bronze, while Sim Jae-young, a two-time world champion in the women's 49kg, was knocked out in the quarterfinals.

South Korea sent six athletes to taekwondo at this year's Olympics, with an eye on two to three gold medals. (Yonhap)