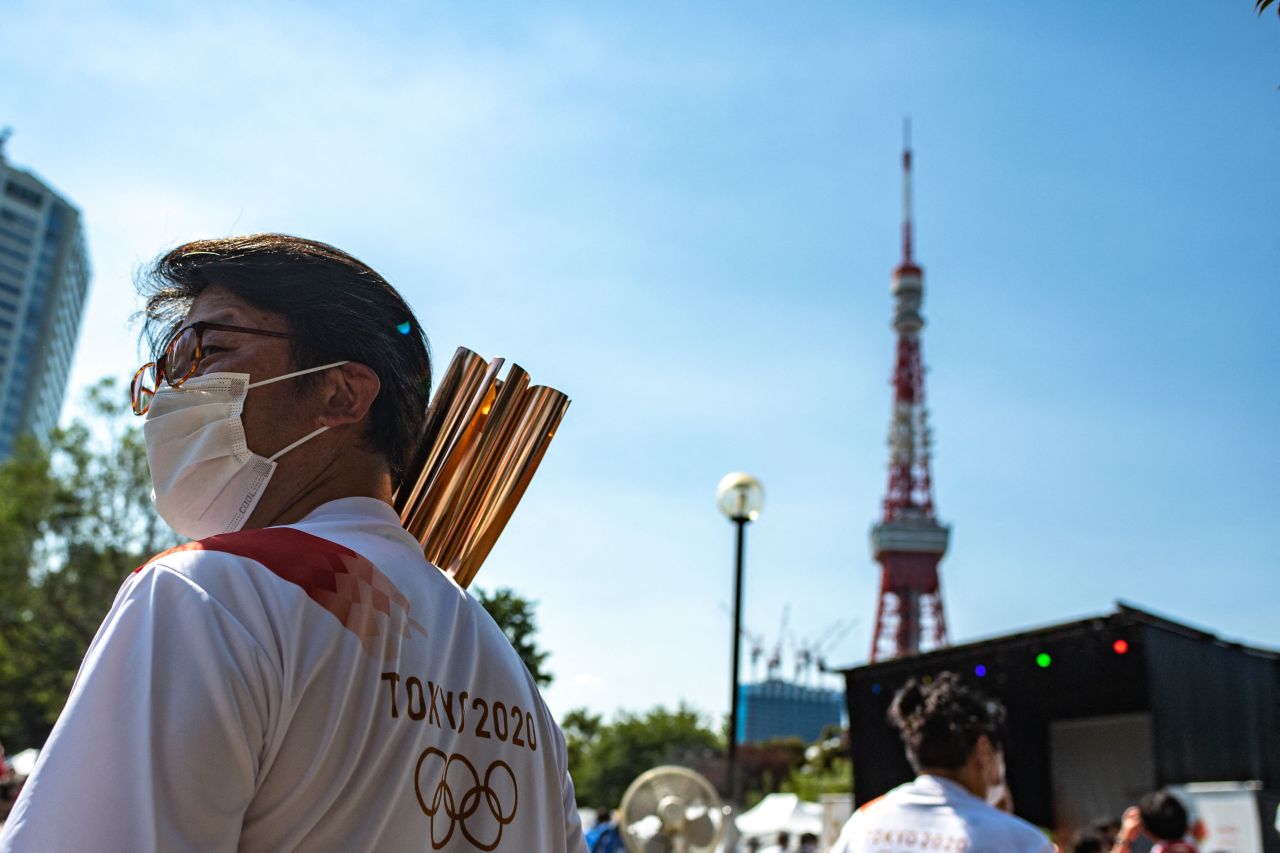 A torchbearer walks past the Tokyo Tower with his Olympic torch the after Olympic flame lighting ceremony at Shiba Park in Tokyo on July 22, 2021, ahead of the Tokyo 2020 Olympic games. (AFP-Yonhap)
The trouble-laden Tokyo Olympics is scheduled to kick off Friday with a scaled-down opening ceremony amid deepening concerns about a surge of COVID-19 infections among athletes and other participants.

After an unprecedented year-long delay due to the COVID-19 pandemic, more than 11,000 athletes from 206 countries are scheduled to compete in 33 sports at the Tokyo Olympics, which will be held at 42 competition venues through Aug. 8.

But the mood remains jittery as the host city is in a state of emergency, the number of infection cases related to the Games are on the rise, and spectators are barred from attending events.

For the opening ceremony slated for Friday night, South Korea has organized a modest-size delegation in consideration of virus infection worries. Only six officials and around 50 athletes will march in Olympic Stadium. Volleyball star Kim Yeon-koung and teen swimming sensation Hwang Sun-woo will be the flag bearers for the ceremony.

Team Korea features 232 athletes and 122 officials. The goal is to get six to seven gold medals, enough to make it to the top ten medal list. Korea ranked eighth with nine gold medals at the 2016 Olympic Games in Rio de Janeiro.

Local media reported that Korean athletes could win their first medals on Saturday in the newly-created mixed team event in archery, the men‘s individual sabre in fencing, and shooting events.

Another category where Korea is expected to excel and sweep medals is taekwondo, which will also start Saturday with the lightweight divisions for men and women.

The athletes will showcase the results of their years of hard work during the Games, but much of media attention is on non-sport elements of the quadrennial event, including a growing list of problems that befuddles host Japan and the International Olympic Committee.

Japan and the IOC went ahead with the event, defying concerns about the risk of it becoming a virus superspreader event, and initial signs are far from positive, with the number of confirmed infections among athletes and other participants hitting 87 as of Thursday afternoon. The number of athletes who have dropped out of competition due to the infection currently stands at four, and is expected to rise in the coming days, according to news reports.

The Japanese prime minister’s office has said that more than 21 percent of Japan’s population of 126 million has been vaccinated in a bid to highlight its anti-virus situation. Still, Japanese media reported Thursday the number of new confirmed cases in Tokyo rose to 1,979, with the seven-day total caseload up over 50 percent from the previous week.

Many top politicians from participating nations are also skipping the Tokyo Olympics. The list of absentees includes President Moon Jae-in who decided not to visit Japan for a summit with Prime Minister Yoshihide Suga timed with the Summer Olympics. The decision came after a Japanese diplomat made lewd remarks about Moon last week, touching off a fresh round of tension between the two countries.

Former Prime Minister Shinzo Abe, who spearheaded the hosting of the Games, will also skip the opening event, citing Tokyo’s state of emergency declaration, according to reports Thursday. Earlier in the day, organizers fired opening ceremony director Kentaro Kobayashi for a joke he made about the Holocaust as part of a comedy act in 1998.

Of the up to seven gold medals Korea aims to win during the Tokyo Olympics, more than half of that total could come on the first full day of the competition following Friday’s opening ceremony.

Jin Jong-oh, one of the most accomplished pistol shooters in Olympic history, could be the first one to bring home the gold. He will compete in the men’s 10m air pistol, with the final scheduled to begin at 3:30 p.m. Saturday at Asaka Shooting Range.

Jin, 41, is in his fifth Olympics. He has won six medals so far, with four gold and two silver medals. The next medal, regardless of its color, will make Jin the most decorated Olympian from Korea.

Jin had won the past three gold medals in the 50m pistol, but that event was cut from the Tokyo‘s program.

If Jin can’t come through with Korea’s first gold at these Olympic Games, the nation will turn its eyes to archers.

The mixed team event has been added to archery for the first time this year. Korea has three male and three female archers on hand, and the team will determine which pair will compete in the team event following the individual ranking rounds Friday.

The seeding for the mixed team competition will be based on individual archers‘ ranking round results. The top 16 countries will be pitted against one another in a single-elimination bracket.

Later Saturday night, the spotlight will be on the male sabre fencers and two taekwondo practitioners. Oh Sang-uk, the world No. 1 in the men’s sabre, is the gold medal favorite. Two of his teammates, Gu Bon-gil and Kim Jung-hwan, have stepped on Olympic podiums before and will try to do it again Saturday.