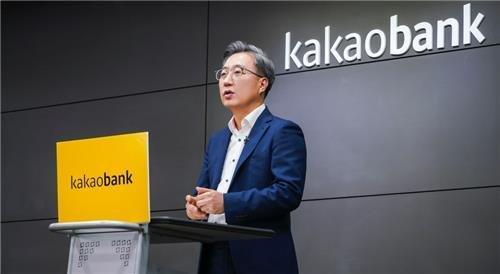 "Kakao Bank will strive to emerge as the top financial platform and break into such areas as insurance, fund and asset management," CEO Daniel Yun said at a news conference to mark the lender's planned initial public offering (IPO).

To that end, Kakao Bank will continue to seek the digital innovation of its bank products and services and boost its competitive edge, he said.

Kakao Bank will also try to enable its customers to have a new financial experience by launching a range of financial products and services connected to diverse industries such as e-commerce and travel, Yun added.

In addition, the internet lender will come up with new lending products tailored for customers and low- and mid-range credit ratings, as well as small entrepreneurs, he said.

Yun further said Kakao Bank's customer base has been expanding to people in all age brackets thanks to its new services, with nearly 40 percent of those aged 14-19 using the lender and people aged 50 or older accounting for 15 percent its customers, up from 9 percent in 2017.

Kakao Bank plans to sell 65.45 million shares through its IPO scheduled for Aug. 6.

Demand forecasting for domestic and overseas institutions is taking place till Wednesday, while retail investors are allowed to subscribe to shares early next week.

Kakao Bank, led by Kakao Corp., the operator of the country's dominant messaging app KakaoTalk, has gained popularity among mobile-savvy customers in recent years thanks to its around-the-clock service and convenience. (Yonhap)