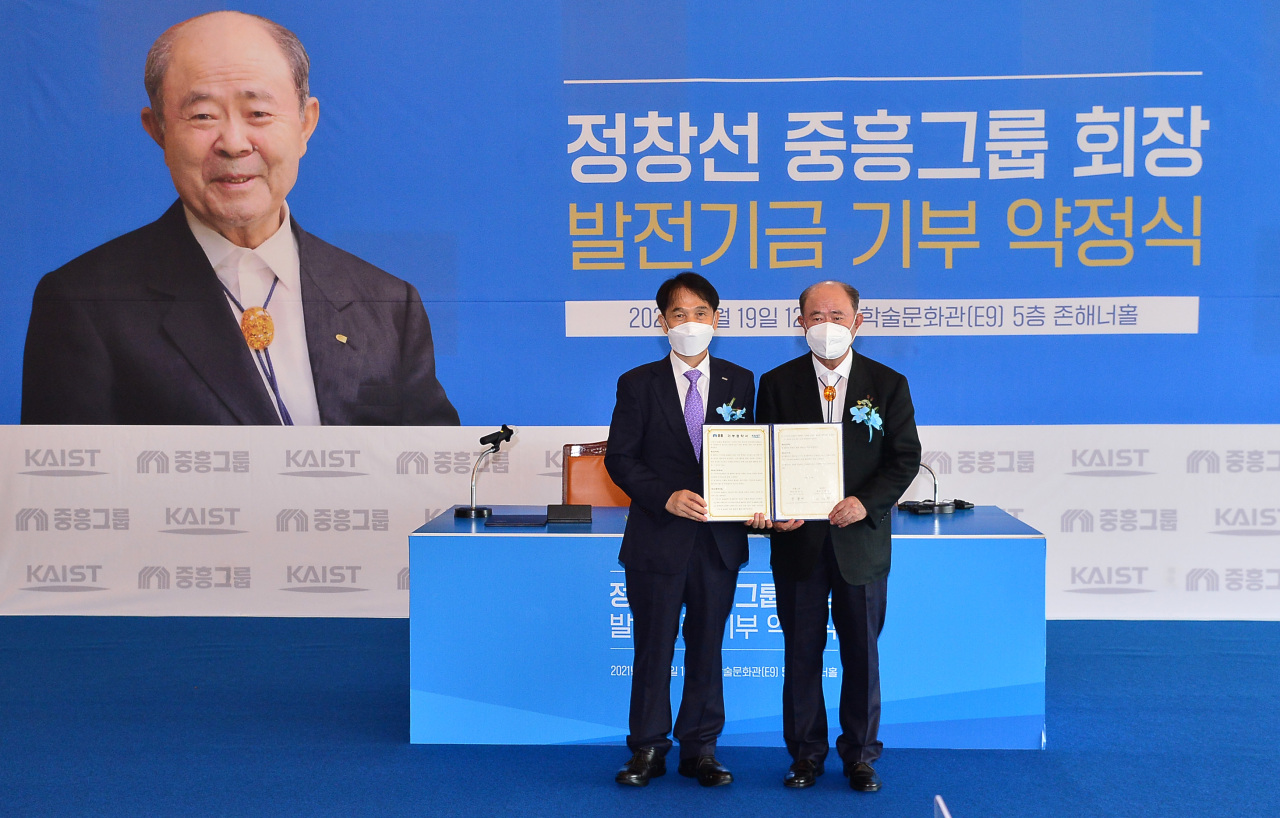 Jungheung Chairman Jung Chang-sun (right) and KAIST President Lee Kwang-hyung pose during a signing event where Jungheung pledged to donate 30 billion won to the tech university. (Jungheung Group)
South Korean construction firm Jungheung Group on Monday pledged to donate 30 billion won ($26.2 million) to the Korea Advanced Institute of Science and Technology, or KAIST, in the hopes of contributing to the growth of the nation’s semiconductor sector by nurturing global talent in the industry.

The company will spend 20 billion won to build an education and research center in Brain City, a technology complex in Pyeongtaek, Gyeonggi Province, and donate 10 billion won in cash to the nation’s top science and technology university to support training programs.

“In order to have competitive edge in this era of technological hegemony, we need to nurture talents in the science and technology fields. If we broadly support young scientists to get unlimited research opportunities, I am sure they will grow up to be outstanding experts who can feed tens of thousands of people,” said Jungheung Chairman Jung Chang-sun at a signing event at the university in Daejeon.

“Making a donation is easier said than done. However, it is the safest and most profitable investment for the future,” Jung added.

The chairman said he hoped the latest donation would help the Brain City project, which takes place in an area measuring approximately 4.83 million square meters, to establish a successful cooperation model for businesses, local governments and universities to grow the Korean semiconductor industry.

“I believe that the donation will be a great help in nurturing semiconductor talents in Korea at this time of great change and strengthen the national competitiveness in the field. I and the 550,000 Pyeongtaek citizens appreciate Chairman Jung for his generous decision,” said Jeong Jang-seon, mayor of Pyeongtaek.

KAIST President Lee Kwang-hyung said the donation would serve as a steppingstone for semiconductor talent and would expedite the nation’s growth in the chip segment.

“We will make the utmost efforts to nurture seasoned chip experts to meet the expectation of the donor,” President Lee said.

The institution is currently planning to establish the KAIST Semiconductor Research Center in Brain City to train researchers and others in the semiconductor industry. To that end, KAIST signed a partnership agreement with chipmaker Samsung Electronics and Pyeongtaek City last Wednesday.