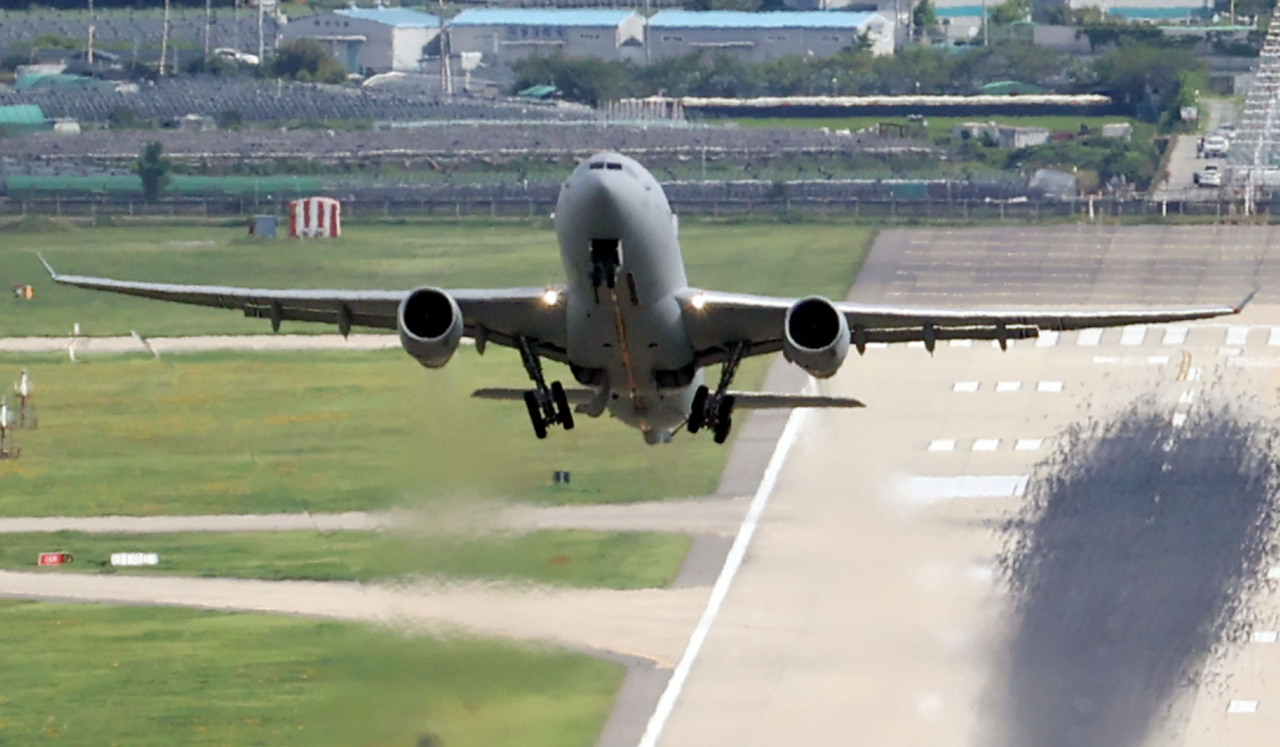 A KC-330 multipurpose aerial tanker takes off from Gimhae International Airport in the southern port city of Busan on Sunday, to bring home South Korean service members affiliated with the Cheonghae unit on an anti-piracy mission off the coast of Africa, after the unit reported a mass COVID-19 infection. (Yonhap)
A total of 247 sailors of South Korea's 301-strong Cheonghae unit on an anti-piracy mission in waters off Africa have tested positive for the coronavirus, the Joint Chiefs of Staff (JCS) said Monday, in the worst-ever mass infection among service members.

An additional 179 members have newly tested positive after 68 were confirmed to have been infected as of Sunday, the JCS said. The unit first reported six COVID-19 cases last week and conducted virus tests on all of its members.

"Test results on all 301 crewmembers of the unit showed that 247 tested positive and 50 negative. The samples of four individuals were undecipherable," the JCS said in a release.

Of them, 16 are now at local hospitals for treatment, and the remainder have been in isolation on their destroyer, the Munmu the Great, it added.

All the service members are expected to return home Tuesday as the government decided to airlift all of them and sent two KC-330 aerial tankers to Africa on Sunday.

One needs intensive care, but the medical staff said he is still able to be airlifted by the aerial tanker, according to JCS officials.

Upon arrival, they will be sent to medical facilities for treatment after undergoing another round of COVID-19 tests, the officials said, adding the military, in close cooperation with the health authorities, are preparing measures to ensure their safety.

Their destroyer will be piloted back home by a team of service members who left the country Sunday aboard the tankers.

Their return will be about a month ahead of the original schedule, which will mark the first early return of the contingent since the unit was first deployed in 2009. The troops are rotated every six months for an anti-piracy mission in the Gulf of Aden off Somalia's coast and around the Strait of Hormuz.

A replacement contingent is on its way after departing for Africa last month to take over the mission.

The case marked the worst ever cluster infection among service members since the military reported its first COVID-19 case in February last year.

Criticism has mounted over the military's poor responses to the pandemic.

Contact tracing is under way, but the infections appeared to have begun after the vessel was docked at an African port on June 28-July 1 to load supplies.

One sailor showed symptoms of a cold, one day after the destroyer left the port. But he was found to have been given only cold medicine. He was not tested for COVID-19 and was not quarantined.

After a dozen others developed similar symptoms about a week later, the authorities conducted COVID-19 tests with rapid testing kits, instead of more accurate PCR tests, which found them all negative.

Samples from six people, however, were sent to a nearby country for PCR tests, and they all were confirmed to have been infected Tuesday, according to the officials.

The authorities have also come under fire for not actively seeking ways to inoculate the unit members, though none of the troops have been vaccinated as they left South Korea just before the country began its inoculation campaign.

"We will review and supplement military guidelines on the management of troops overseas, including how to respond to infectious diseases," a defense ministry official said.

Up until now, around 73 percent of some 1,300 troops on overseas missions have been fully vaccinated, including all members of the new batch of the Cheonghae unit, according to the ministry. (Yonhap)