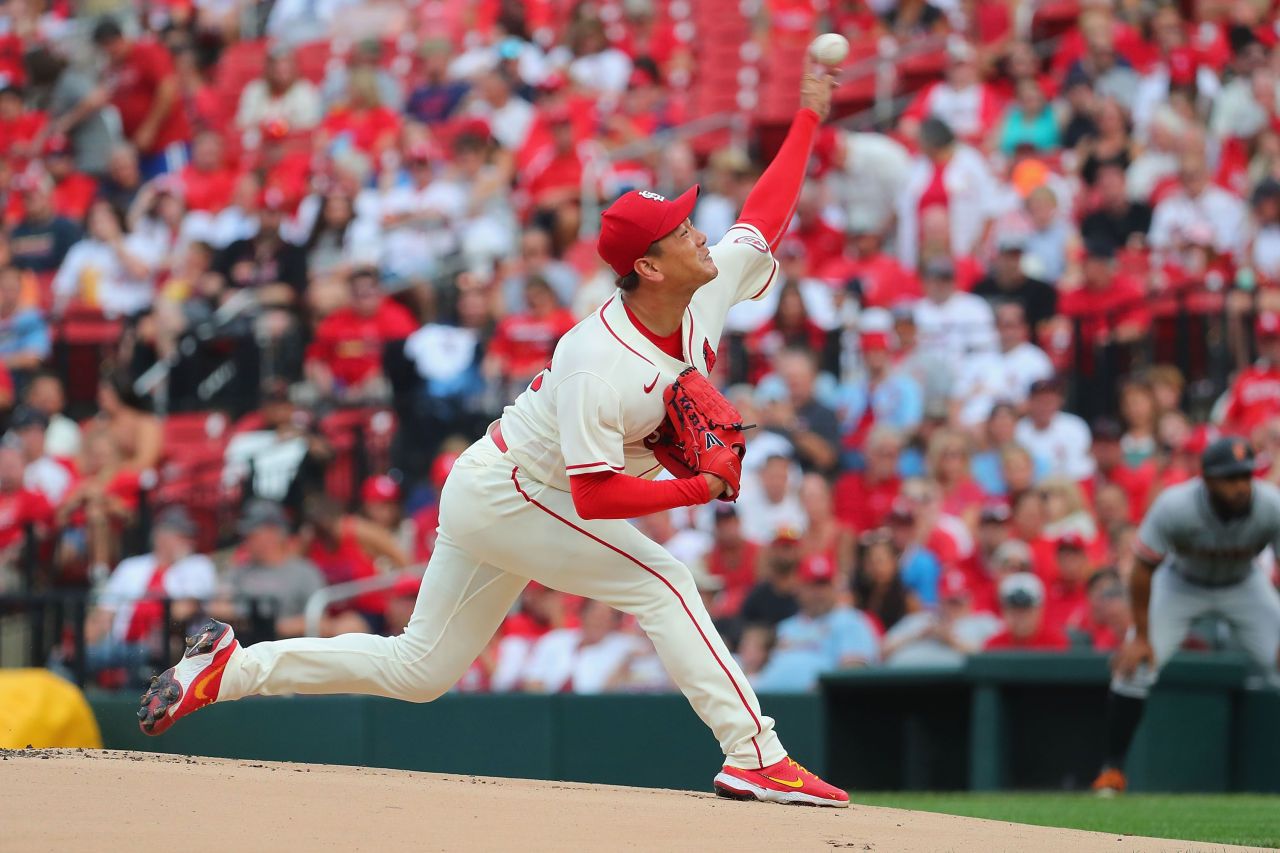 The South Korean left-hander tossed six scoreless innings against the San Francisco Giants in a 3-1 victory at Busch Stadium in St. Louis on Saturday (local time). By winning his fourth consecutive start, Kim improved to 5-5 for the year and lowered his ERA from 3.11 to 2.87.

The last run Kim allowed came in the third inning of a home game against the Arizona Diamondbacks on June 30. Kim threw two scoreless innings to wrap up that outing.

Then on July 5, Kim held the Giants to three singles in seven shutout innings in the best start of his sophomore big league season. He followed that up with six scoreless frames against the Chicago Cubs on July 10 in his final start before the All-Star break.

And the crafty lefty picked up where he left off to open the second half of the season, as the Giants, who owned the best record in the bigs at 58-32 before this game, only managed three singles against Kim and bounced into one softly hit groundout after another.

Tyler O'Neill's solo shot in the bottom of the second, and a two-run blast by Paul Goldschmidt in the sixth provided more than enough run support for Kim.

Kim held the Giants without a hit through the first three innings while giving up one walk in the process.

That free pass came with two outs in the first to Mike Yastrzemski, who was stranded when Darin Ruf lined out to right field.

Kim retired the side in order in the second, though he got into a couple of full-count battles to do so.

He was more efficient in the third inning, needing only eight pitches for his second straight three-up, three-down inning.

The Giants got their first hit off Kim in the fourth, as Donovan Solano led off with a single to right. But nothing came out of that, with Yastrzemski hitting into a fielder's choice groundout and then Ruf bouncing into an inning-ending double play. This was another eight-pitch frame for Kim.

The Giants had two men on board in the fifth but failed to make Kim pay. Wilmer Flores led things off with a single and advanced to second on a wild pitch. With two outs and the first base open, Kim intentionally walked Thairo Estrada to face No. 9 hitter and opposing pitcher, Anthony DeSclafani, instead. The decision paid off as Kim struck out DeSclafani to end the Giants' threat.

Kim pitched around a one-out single by Solano in the sixth inning. The meat of the Giants' order was coming up, but Yastrzemski and Ruf popped out and flied out to let Kim off the hook.

Reliever Ryan Helsley took over the mound to begin the seventh. The Giants promptly got a run off the new pitcher, and Genesis Cabrera came on to douse the fire and keep it a 3-1 game. Giovanny Gallegos and Alex Reyes each threw a scoreless inning to close out the win.

Kim made 85 pitches and relied heavily on his two primary pitches: four-seam fastballs (38) and sliders (32). (Yonhap)