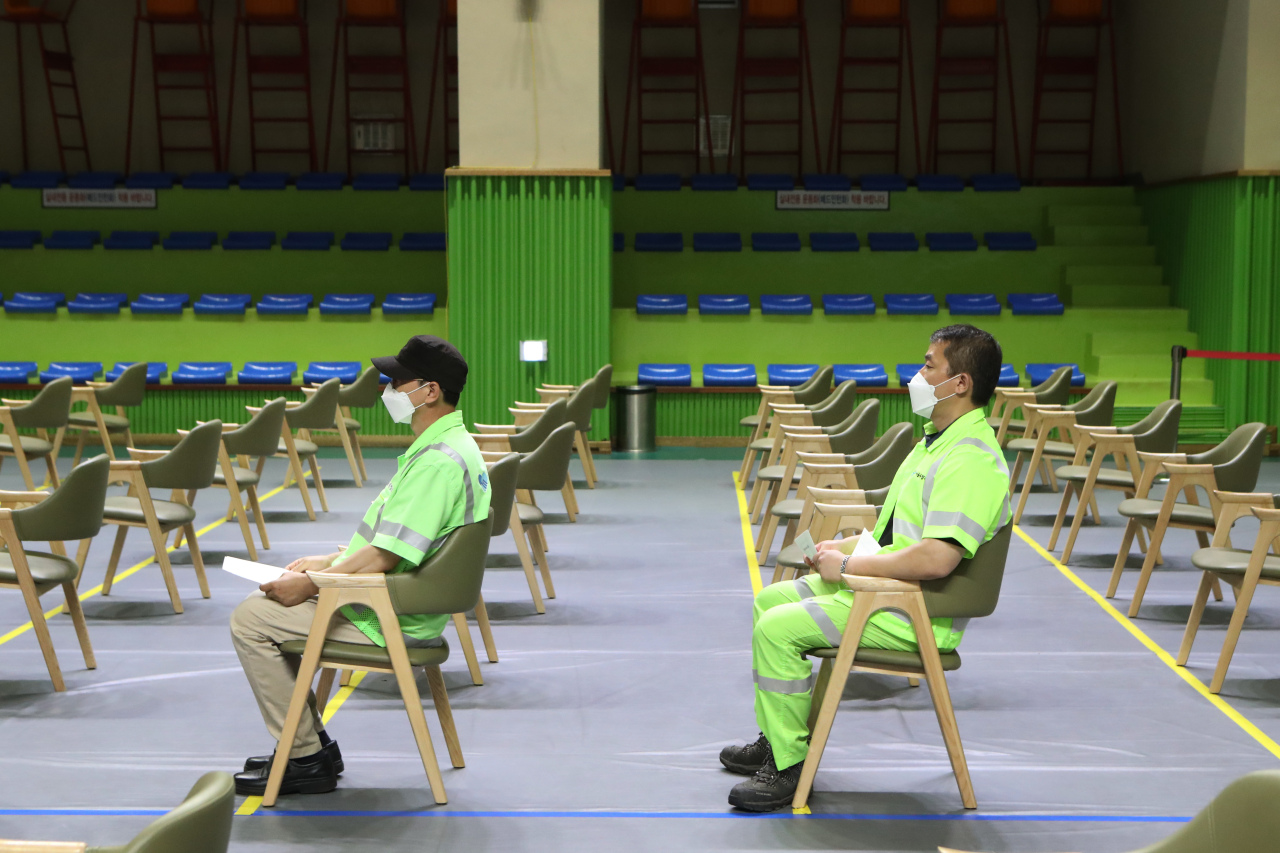 This photo shows members of the essential workforce waiting at a vaccination clinic in Seoul on Tuesday. (Yonhap)

Monday was a big day for 50-somethings in South Korea. The reservations for long-awaited COVID-19 vaccines finally opened up, to last until Saturday.

Those who sign up would get their first doses of the vaccine made by Moderna later this month.

But at around 2 p.m. the online and over-the-phone system for vaccine booking shut down altogether having opened at midnight. The Korea Disease Control and Prevention Agency, which oversees the vaccination campaign, said that they couldn’t take more appointments. There weren’t any vaccines left.

“It was nerve-wrecking,” said a Gyeonggi Province resident Choi Yea-na, 27, who was making the appointment for her mother, of the experience. “My heart was pounding as I worked at it. At one time, there were like 49,787 people who were ahead of me, also waiting for the page to load.”

Choi said she did managed to get an appointment in the end, but the whole process left her “wondering why it should be so hard to reserve a spot for a vaccine on the dates that the government has designated for you.”

A college senior in Seoul, who only agreed to give her surname Park, said her 57-year-old mother was “so disappointed and disheartened” that she did not get an appointment for her vaccine. “My mom really cried,” she said.

“I feel bad because I couldn’t help her. I had something that I couldn’t miss in the morning so my mom had to do it by herself,” she said. “She sent me a screenshot of the registration page which said the approximate wait time was 62 hours. She didn’t know how to refresh or try other routes so she said she just waited. Then it was over.”

Park and her mother made their first attempt when the booking opened at midnight, but gave up after the site crashed repeatedly. “I didn’t know it was going to be first-come, first-served. I told my mom not to worry, there were a couple of more days left,” she said. “Now I feel like a bad daughter.”

Park’s mother is just one among 1.6 million people who saw the door to the opportunity at a vaccine close before their eyes. The understanding was that all 3.5 million people aged 55 to 59 years would be able to get a slot over the week, if they wished. Instead, they were told the limited supplies available were taken up by their luckier peers, and that they would have to try again at the next chance.

The senior policy aide to the health minister, Yeo Jun-sung, who was formerly Moon Jae-in’s presidential secretary, said in a Facebook statement Monday that it was “out of an abundance of caution” that the vaccine registration was cut off abruptly that afternoon.

“Moderna supplies are being negotiated each week, and more are set to arrive next week,” he said, fending off questions about whether the country’s vaccine stock was running low. “The national disease control agency decided to only accept appointments up to a threshold that can be covered by the supplies that are secured at the moment, just in case.”

This is not the first time that the vaccinations could not proceed on schedule over supply issues.

Some 200,000 people in their 60s and early 70s, as well as some essential workers, are still getting their first doses this month as the vaccines allotted for them did not come through in time. Amid a shortage, only about 90,000 doses were administered per day for the past week. Just 11 percent of the Korean population were fully vaccinated as of Monday.

Clinics said they have received concerned calls from people asking if they were getting the vaccine on the reserved date. “But I can’t really give them an answer because I don’t know, either,” said a primary physician in Mapo, a western district in Seoul.

Explanations from officials have done little to allay worries that vaccinations might be delayed.

To a press inquiry asking if there were enough vaccines for the 1.8 million people who managed to book an appointment before the system closed, the agency’s senior official Lee Sang-won did not give a direct answer. “I’ll have to discuss the matters with the officials in charge,” he said during a briefing held late Monday afternoon.

In a message sent to reporters the same day, the agency vowed vaccines will be “sufficiently supplied over the third quarter” without giving even a vague timeline of the next shipments.

As of Monday, the amount of Moderna vaccine currently in the country was 807,000 doses. There are 7.42 million people in their 50s who are due their first Moderna shots between July 26 and Aug. 7.

Then again Tuesday, the agency’s response fell short of anything definitive.

“It’s anticipated that we will have enough vaccines in August, so anyone in their 50s wishing to get vaccinated will have a chance to make an appointment,” said Park Hye-kyung, an agency official, during a briefing.

You Myoung-soon, a public health communications professor at Seoul National University, said to restore the public’s trust in the system, the authorities “should provide an acceptable explanation as to why such inconveniences had occurred, and how these might be resolved.”

“Korea’s vaccine rollout for the general public is just beginning. To convince more people to get vaccinated, building confidence in the process is critical,” she said. “The fiasco with the vaccine registration on Monday cannot happen again.”