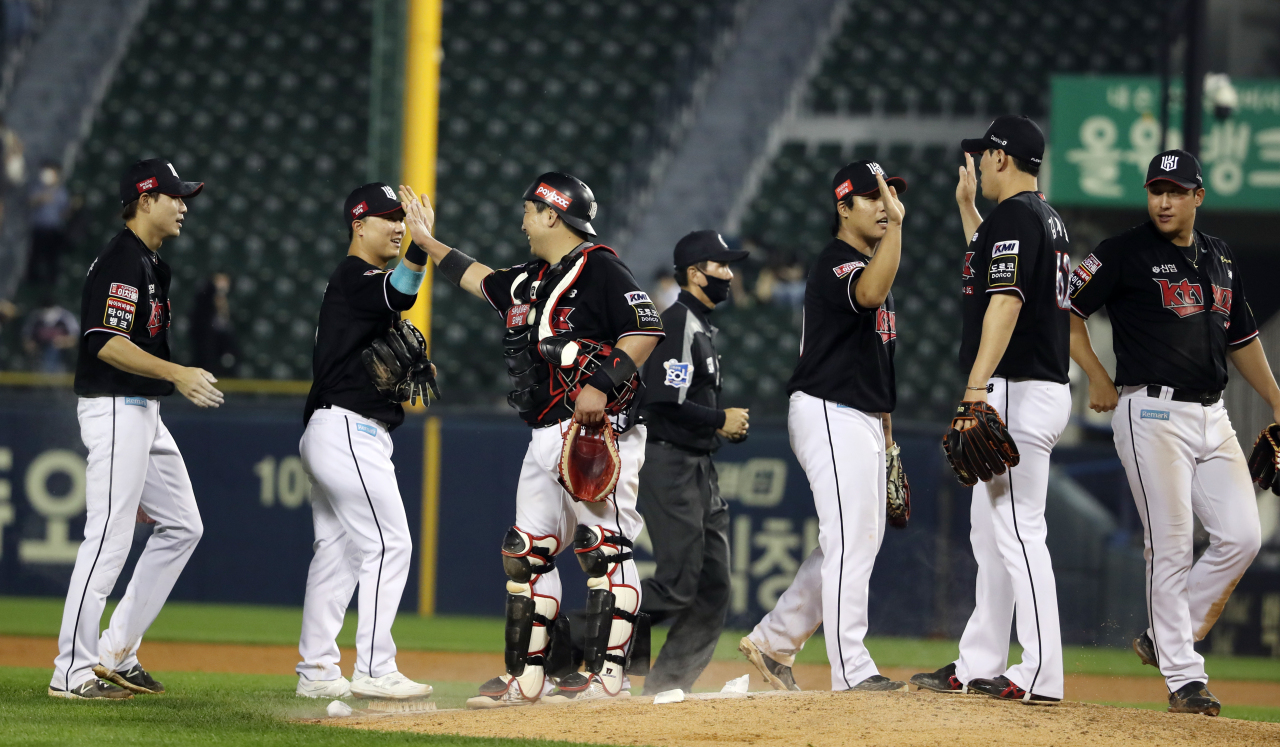 In this file photo from June 30, 2021, members of the KT Wiz celebrate their 4-3 victory over the LG Twins in a Korea Baseball Organization regular season game at Jamsil Baseball Stadium in Seoul. (Yonhap)
As the youngest club in the South Korean baseball league competing in their seventh season, the KT Wiz find themselves at the top of the standings at the All-Star break.

The first half of the 2021 came to a screeching halt Monday, when the league announced it would suspend the season in light of five combined COVID-19 cases from the NC Dinos and the Doosan Bears. All games scheduled from Tuesday to Sunday have been moved to a later date, and then from next Monday to Aug. 9, the league is going on a Tokyo Olympic break, which was put in place before the start of the season.

The Wiz have the best winning percentage with a 45-30 win-loss record, two games ahead of the LG Twins. The Samsung Lions are in third place at 45-34-1 (wins-losses-ties), having played five more games than the Wiz.

The Wiz qualified for their first-ever postseason last year and have been able to build on that success this year.

The pitching staff led by Odrisamer Despaigne (8-6, 2.45 ERA) has been rock solid, but first baseman Kang Baek-ho has been by far the Wiz's biggest star.

The 21-year-old has been flirting with the elusive .400 batting average all year while carrying an otherwise average Wiz offense on his shoulders. He was hitting .401 entering July but has since slipped to .395, still the best mark in the league by 47 points.

The Twins, whose offense is about as ordinary as the Wiz's, are also riding strong pitching into contention. They have the league's lowest ERA with 3.72 and the lowest walks and hits per innings pitched (WHIP) with 1.35. They have held opponents to an on-base plus slugging percentage (OPS) of .681, the best in the KBO.

Both the Wiz and the Twins made the postseason last year and were generally expected to contend again this year. The resurgence of the Lions, who haven't been to the postseason since 2015, is a pleasant surprise.

Jose Pirela, the new foreign bat for the Lions, will get some deserved MVP consideration if the Lions can stay in contention. He's tied for the league lead with 20 home runs and ranks second with 65 RBIs. Those power numbers are nice, but Pirela has also earned rave reviews for his hustle.

Before the start of the season, Shinsegae Group bought the SK Wyverns and renamed the club SSG Landers. They also made a major splash by signing former major league All-Star outfielder Choo Shin-soo.

The top six clubs are only separated by 6.5 games. The defending champions Dinos (37-35-2) and the Kiwoom Heroes (41-39) are in a virtual tie for sixth. The Bears (36-38) appear in danger of having their streak of consecutive Korean Series appearances snapped at six.

The three clubs with foreign managers in charge are bringing up the rear. The Lotte Giants sacked second-year manager Her Mun-hoe on May 11 and replaced him with their former minor league skipper Larry Sutton.

The Kia Tigers, in their second season under Matt Williams, won their final six games of the first half but remained stuck in ninth place at 31-43. At one point, all three of their foreign players -- starters Aaron Brooks and Daniel Mengden, and first baseman Preston Tucker -- were sidelined, while veteran outfielder Choi Hyoung-woo, the 2020 batting champion, was bothered by a rare eye condition that limited his vision earlier in the season.

Then there are the Hanwha Eagles (29-50), with former Milwaukee Brewers coach Carlos Subero overseeing a rebuild. They're on pace to finish in last place for the second straight year. They've been to the postseason just once since 2008.

The KBO spent most of the 2020 season, Year 1 of the COVID-19 pandemic, without fans. The 2021 campaign began with some promise, as teams outside the greater Seoul area were allowed to have fans at 30 percent capacity, while those in and around the capital city could operate at 10 percent capacity.

Those figures jumped to 50 percent and 30 percent, respectively, in June, thanks to loosened social distancing rules for sporting events.

Clubs in the capital region were hopeful they too could have fans at 50 percent capacity starting July 1, when the new set of social distancing guidelines was supposed to take effect and restrictions on crowds at sports events were to be lifted.

Instead, the government put that plan on hold on June 30, scared off by a surge in cases in and around Seoul. Then the government put the area under the most stringent set of distancing rules Monday for two weeks. KBO clubs in greater Seoul would have had zero fans through July 25.

But it all became moot Monday with the league's decision to suspend the season. The league-leading Wiz, one of the affected clubs based in Suwon, 45 kilometers south of Seoul, will surely hope to have some fans back in the seats when they resume their pennant push on Aug. 10. (Yonhap)