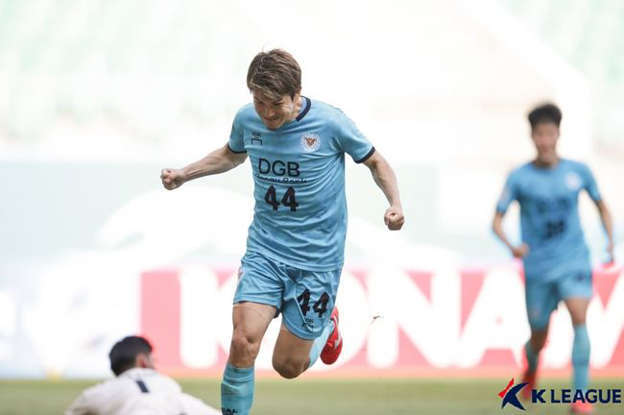 Tsubasa Nishi of Daegu FC celebrates his goal against United City in the clubs' Group I match at the Asian Football Confederation Champions League at Bunyodkor Stadium in Tashkent on Sunday, in this photo provided by the Korea Professional Football League. (Korea Professional Football League)
Daegu FC have qualified for the round of 16 at the Asian Football Confederation (AFC) Champions League for the first time, joining three other South Korean clubs in the knockouts at the continent's top club competition.

Daegu blanked United City 4-0 in their final Group I match at Bunyodkor Stadium in Tashkent on Sunday (local time) and locked down the second seed in the group. Four players chipped in a goal apiece, with Tsubasa Nishi opening the scoring in the 37th minute.

This will be Daegu's first appearance in the round of 16 at the AFC Champions League. Their only previous tournament was in 2019, when they finished third in the group to miss out on the knockouts.

The K League sends up to four clubs to the annual tournament, and the last time all four made it to the round of 16 came in 2015.

"We've made history, and hopefully, this will be a stepping stone for us to achieve even bigger things," Lee said. "We had ups and downs throughout the group stage. We aren't going to stop here. We'll be taking on tougher opponents in the knockouts, but we want to play better and reach greater heights."

The tournament expanded to 40 teams starting this year. The 10 group winners automatically qualified for the knockouts, and the three best runners-up from the East and West regions joined them.

Daegu, with 12 points, finished as the top runners-up in the East Region, made up of clubs from countries such as South Korea, Japan, China, Australia and Thailand. Pohang had the third-best mark among East runners-up.

In the round of 16, Jeonbuk will face BG Pathum United of Thailand, but three other K League clubs will all face Japanese foes. The matchups are Ulsan vs. Kawasaki Frontale, Daegu FC vs. Nagoya Grampus and Pohang vs. Cerezo Osaka.

All knockout matches, including the final, will be played over one leg to minimize traveling amid the coronavirus pandemic. Group matches were contested in centralized venues for the same reason.

The West Region features clubs from Iran, Iraq, Saudi Arabia, Qatar and Uzbekistan, among others.

The two regions will be on opposite sides of the bracket through the semifinals. (Yonhap)