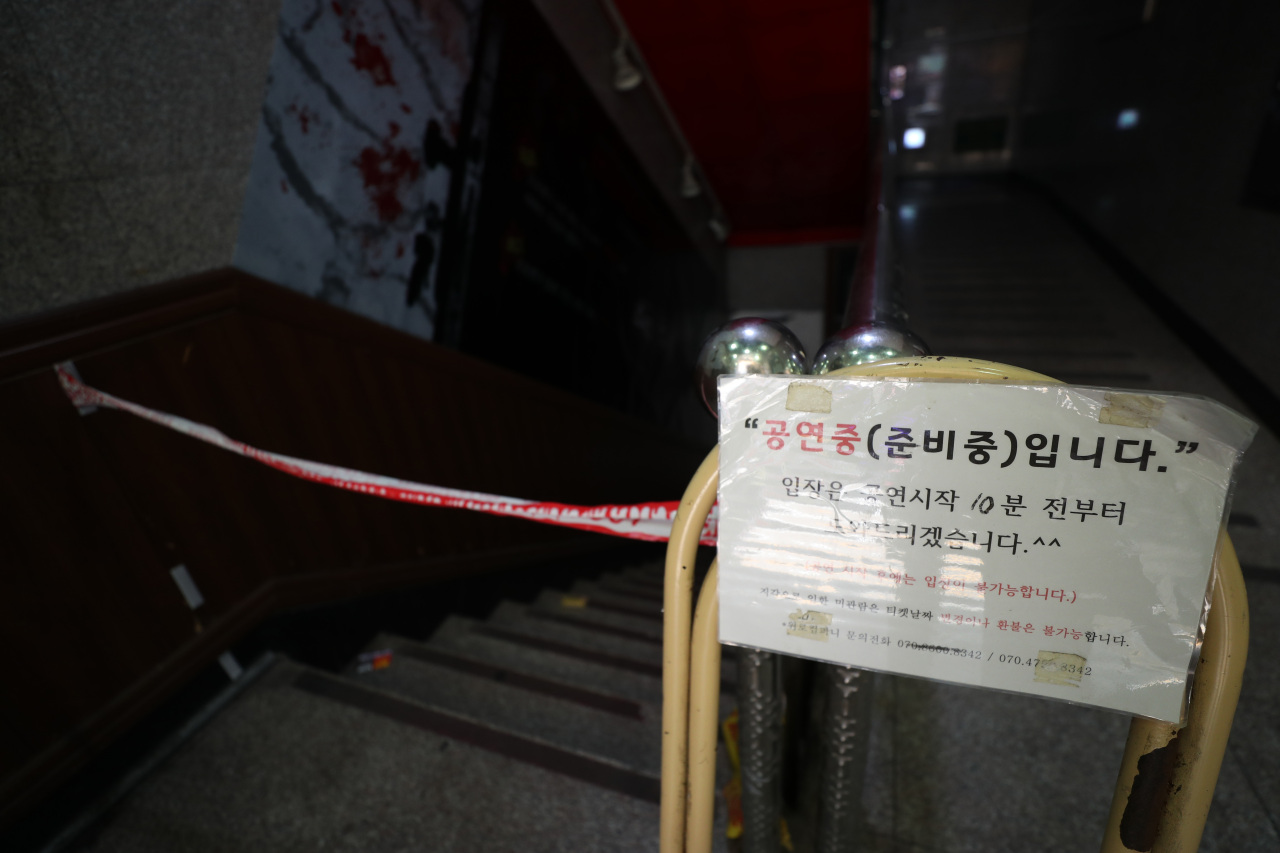 A small stage theater in Jongno-gu, central Seoul recently became the center of a cluster infection. (Yonhap)
With social distancing measures in the greater Seoul area raised to the highest in the revised four-tier system from Monday, most musicals have been rescheduled to continue performing while complying with the semi-lockdown rule.

Under the Level 4 social distancing in force for two weeks starting Monday, performing arts venues must close at 10 p.m. and the number of audience members for each performance is limited to a maximum of 5,000 with every other seat left vacant, allowing for a group of two to sit together.

As most musical performances start at 7:30 p.m. or 8 p.m., the shows have been rescheduled to start earlier. Some have resorted to shortening the intermission to have the shows end before 10 p.m.

Also, while audiences were allowed to sit together with their company of up to four people under the previous rule, the new rule allows two people to be seated together even after 6 p.m., as attending performing arts shows is considered a private gathering.

The musical “Beetlejuice,” which opened Tuesday at the Sejong Center, announced its evening performances will now start at 7 p.m. instead of 8 p.m. The show‘s afternoon performances have been rescheduled, too, from 3 p.m. to 2 p.m.

The show will allow only two audience members to sit together, regardless of the hours.

EMK Musical Company, a major musical producer here, has rescheduled its musical “Marie Antoinette” at the Charlotte Theater, which is slated to kick off Tuesday. The show will start 30 minutes earlier than originally scheduled, starting at 2:30 p.m. and 7 p.m.

To keep the running time to 170 minutes, the intermission has been shortened from 20 minutes to 15 minutes.

Seensee Company also shortened the intermission for “Chicago” from 20 minutes to 15 minutes.

Meanwhile, the Seoul Performing Arts Company’s show “Yun Dong-ju, Shoot the Moon,” which was set to open Saturday, was canceled at the last minute as a staffer at the Seoul Arts Center was confirmed to have COVID-19.

Some music concerts held at sports arenas or parks have also been called off. The Seoul “Mister Trot” concert slated to run from Friday to Sunday at the Seoul KSPO Dome has been canceled.

Cinemas must close at 10 p.m., too, while leaving an empty seat between audience members who did not come together.

Museums and art galleries can receive 30 percent of the number they are allowed under the one person per 6 square-meter restriction.

The new measures will remain in place for two weeks until July 25.