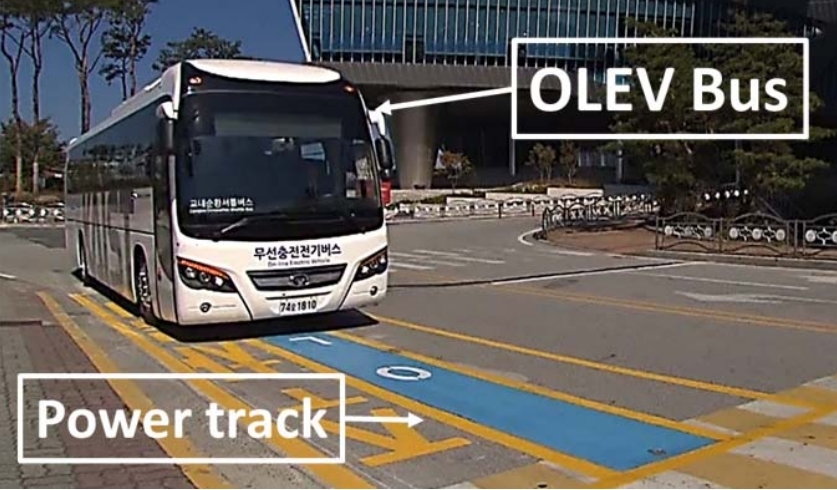 It has been some time since wireless charging became a part of the everyday life of smartphones users, which begs the question: Could the same be possible for electric cars?

In the early 2010s, a team of South Korean researchers took up this question seriously and developed what’s called the online electric vehicle system, enabling cars to source power from the very roads they drive on.

In August 2013, the Korea Advanced Institute of Science and Technology team led by professor Yoon Uoo-yeol debuted the world’s first OLEV platform, which attracted a global spotlight from media outlets such as the BBC, CNN and Wall Street Journal.

“Hop on the world’s first wireless charging bus,” was the headline of the Wall Street Journal’s video report.

The following year, the OLEV platform was deployed on a commercial bus route in Gumi, North Gyeongsang Province, in a pilot project backed by the government. But it wasn’t long until the researchers and government officials realized the limits.

While the inductive chargers underneath the road worked fine, battery parts of the electric vehicles kept breaking down. Since there were no electric buses available in Korea, the engineers had converted diesel buses into OLEVs at a whopping cost of 1.6 billion won ($1.4 million) per unit.

Making electric vehicles was still in its infancy here at the time, let alone accommodating the advanced idea of inductive-charging roads. Most of the prototypes have since either been left in the garage or scrapped, KAIST records show.

Fast-forward to 2021 and as the world races into the electric vehicle era, South Korea is revisiting the old OLEV project. A new pilot project will begin this month in Daejeon, the nation’s fifth-largest city, in which three electric buses will depart from the north gate of the KAIST campus and run a route totaling 17.4 kilometers in about 67 minutes.

The 38-passenger OLEV will be fed 150 kilowatts of electricity from an underground wireless charger installed at the north gate of the KAIST campus. With a battery capacity of 155 kilowatt-hours, the bus can travel 120 kilometers on a single charge. This means that if the OLEV stops above the “power track,” or the electrification road, for just one minute electricity enough to travel 2 kilometers will be charged. 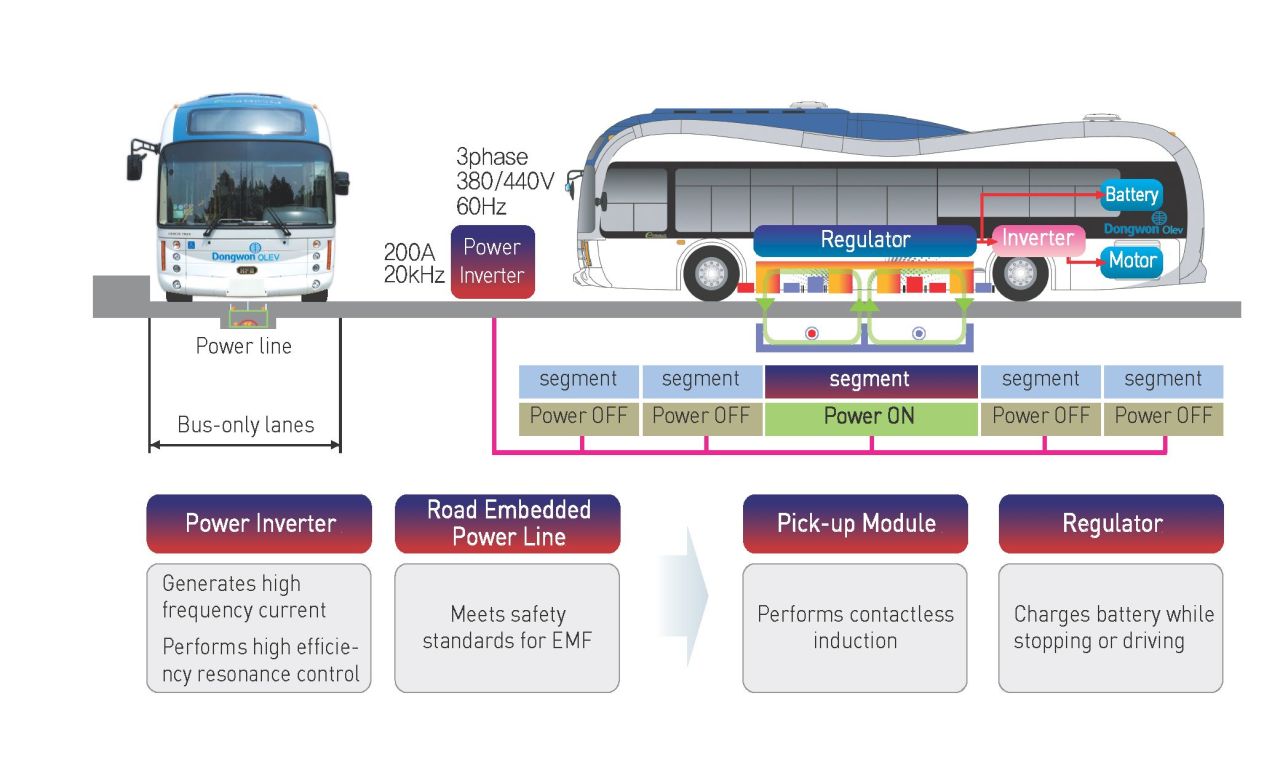 An illustration shows how an online electric vehicle works. (Dongwon)

The pilot project in Daejeon has only one power track installed. But if 2 to 15 percent of the route supports inductive charging, the OLEVs will stay fully charged while in motion at all times, according to WiPowerOne, the company spun-off from KAIST that developed the OLEV system.

This means vehicles won’t need massive batteries. Just one-fifth of what goes into today’s typical electric vehicles will do, it claims.

The problem lies in the hefty initial costs.

To install a power track about 5 meters long, it costs 100 million to 150 million won. In comparison, it takes 40 million to 45 million won to install a 100-kilowatt rapid charger for electric vehicles, and half of the costs are covered by state subsidies. Establishing a 1-kilometer power track, for example, could cost some 20 billion to 30 billion won.

Despite the staggering costs, once properly rolled out the power track will provide major incentives for bus operators to opt for electric power and accelerate the decarbonization of the nation’s mass transit system.

“Instead of providing subsidies to electric buses, the government could divert the budget to power track rollouts, as OLEVs can serve as a much cheaper alternative to electric buses,” said Nam Jin-woo, team leader at WiPowerOne.

One electric bus costs about 400 million won, with batteries accounting for approximately 30 percent of that, or 120 million won. As OLEVs require one-fifth of the batteries, they would be much cheaper than electric buses, he said.

Installing an OLEV system on a passenger vehicle such as the Tesla would cost 10 million won, Nam added.

Due to such potential, efforts are being made all across the world to commercialize the OLEV technology.

In 2018, China paved a 2-kilometer expressway with solar panels and covered them with transparent concrete. Wireless chargers are embedded underneath to charge OLEVs wirelessly.

In January, Israeli startup ElectReon completed a 1.65-kilometer wireless charging road in Gotland, Sweden. Also, ElectReon in March completed a 700-meter power track in Tel Aviv, Israel. According to the company, electric trucks can receive electricity from the roads at a maximum speed of 60 kilometers per hour.