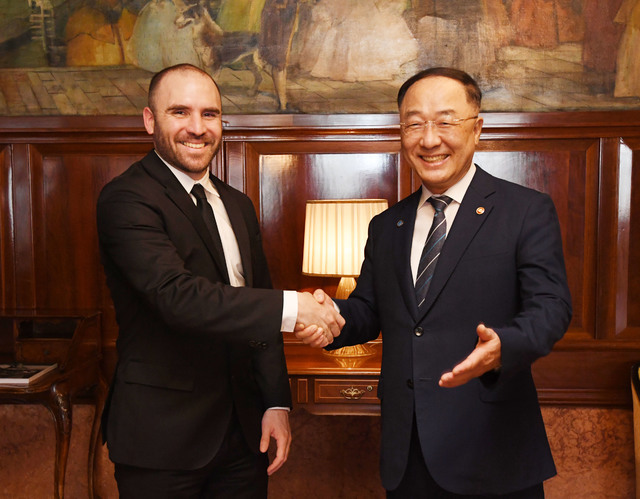 South Korean Finance Minister Hong Nam-ki (right) shakes hands with his Argentine counterpart, Martin Guzman, before talks in Venice, Italy, on the sidelines of the Group of 20 meeting of top financial and economic officials. (Ministry of Economy and Finance)

The finance ministers of South Korea and Argentina have shared concerns over the normalization of expansionary monetary policies by major economies, the Ministry of Economy and Finance said Friday.

During a meeting ahead of the Group of 20 meeting of top finance and economic officials held in Venice, Italy, set for Friday and Saturday, Finance Minister Hong Nam-ki and his Argentine counterpart Martin Guzman raised the possibility that the withdrawal of monetary easing measures, including a interest rate hike, could prompt cross-border capital flow, increasing economic uncertainties in developing countries, officials said.

The remarks came as the US Federal Reserve took a hawkish stance toward an interest rate hike, as its economy has been showing signs of recovery with its consumer price index rising 4.2 percent on-year in April, which marked the fastest growth in 13 years.

Bank of Korea Gov. Lee Ju-yeol also hinted at a key interest rate hike by the end of the year, saying “if our economy is expected to stage a modest recovery, the central bank will normalize the current easing of monetary policy in an orderly way at an appropriate time” in a statement to mark the 71st anniversary of the BOK’s foundation.

Meanwhile, the two sides shared their views on efforts to strengthen economic cooperation.

“We welcome the resumption of negotiations on the Korea-Mercosur trade agreement, which were suspended due to COVID-19 for more than a year,“ Hong said, calling for a swift agreement on the pending free trade deal.