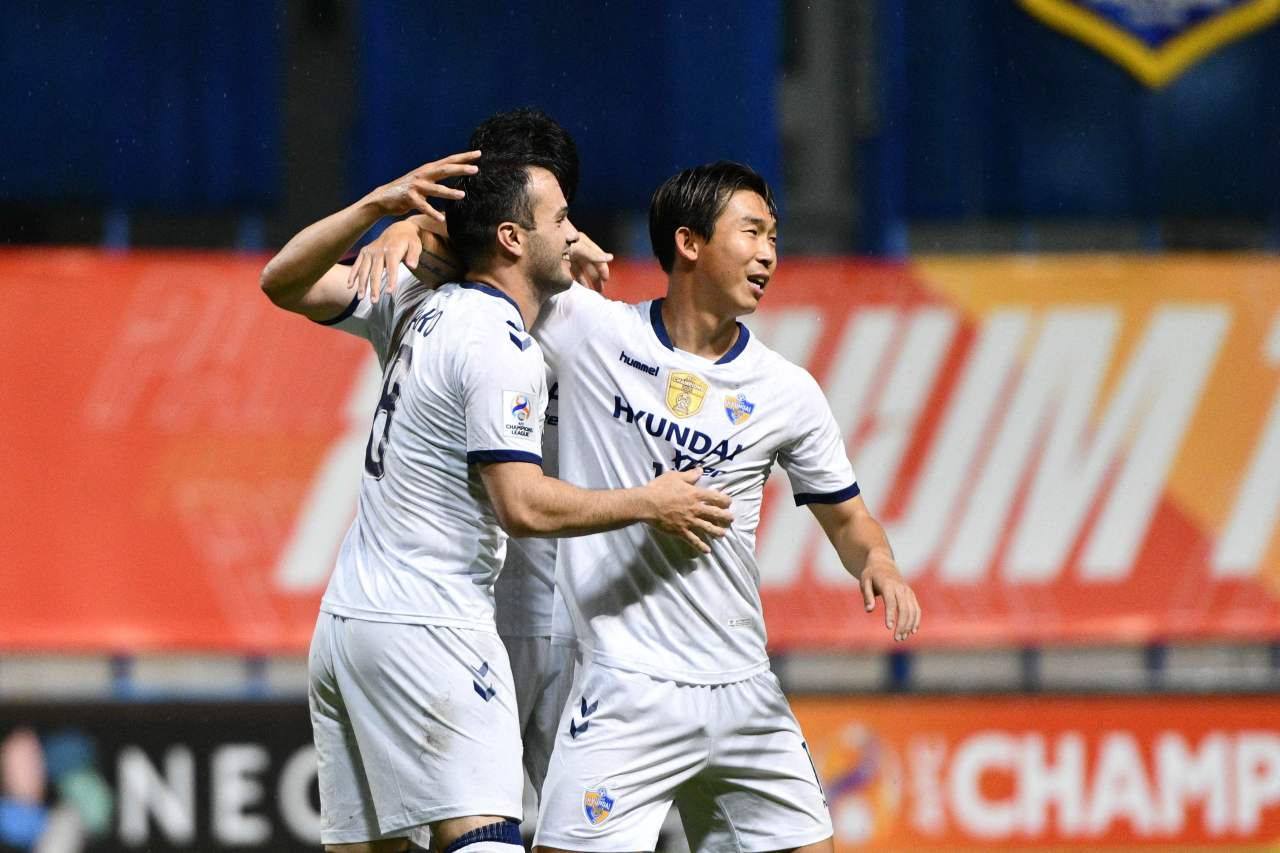 Valeri Qazaishvili (L) of Ulsan Hyundai FC celebrates his goal against Viettel with his teammate Yoon Bitgaram (R) during the clubs' Group F match at the Asian Football Confederation (AFC) Champions League at Pathum Thani Stadium in Bangkok on Thursday, in this photo provided by the AFC via AFP. (AFP-AFC)
Defending champions Ulsan Hyundai FC have qualified for the knockout stage at the Asian Football Confederation (AFC) Champions League, moving forward in their bid for a second consecutive title at the continent's top club football tournament.

The South Korean club defeated Viettel 3-0 at Pathum Thani Stadium in Bangkok on Thursday (local time) for their fifth consecutive victory in Group F. Sitting at 15 points with one match remaining against BG Pathum United on Sunday, Ulsan have assured themselves of at least a top-two finish in the group and a place in the round of 16.

The 10 group winners and three best runners-up from each of the East and West regions qualify for the knockout phase. Even if Ulsan lose to BG Pathum United in their final group match on the weekend, they will still be one of the top three runners-up in the East.

Ulsan have also extended their tournament-record winning streak to 14, dating back to last year's campaign when they won it all in Qatar.

They're the second club from the K League 1 to advance to the round of 16, joining Jeonbuk Hyundai Motors of Group H.

Against Viettel, Ulsan scored all three of their goals in the second half, with forward Lukas Hinterseer scoring for the third time in the tournament in the 55th minute. Oh Se-hun also got his third goal of the competition, while Valeri Qazaishvili picked up his second marker.

"We didn't capitalize on a few chances in the first half, and during halftime, we talked about exploiting open space behind the defense," Ulsan head coach Hong Myung-bo said. "And our plan worked out in the second half, and our substitutes played quite well to help us win."

Hinterseer said he wants to close out the group stage on a high note.

"We're very happy to win five games in a row, but the group stage is still not finished yet," he said. "We're focusing on the last game against Pathum. We just try to stay concentrated on game to game. If we can focus like this, we can go very far again."

Two other K League outfits, Daegu FC and Pohang Steelers, have failed to win their groups and must try to sneak in as one of the three-best No. 2 seeds from the region.

Pohang completed their Group G play Wednesday with a 1-1 draw against Nagoya Grampus. With 11 points, Pohang are currently the second-best runners-up in the East Region, behind BG Pathum United of Group F.

Daegu are fourth among runners-up after five matches, after losing to Kawasaki Frontale 3-1 on Thursday at Bunyodkor Stadium in Tashkent.

Daegu are stuck at nine points ahead of the final Group I match against United City coming up on Sunday.

For this year's tournament, all group matches are being held in centralized locations. (Yonhap)