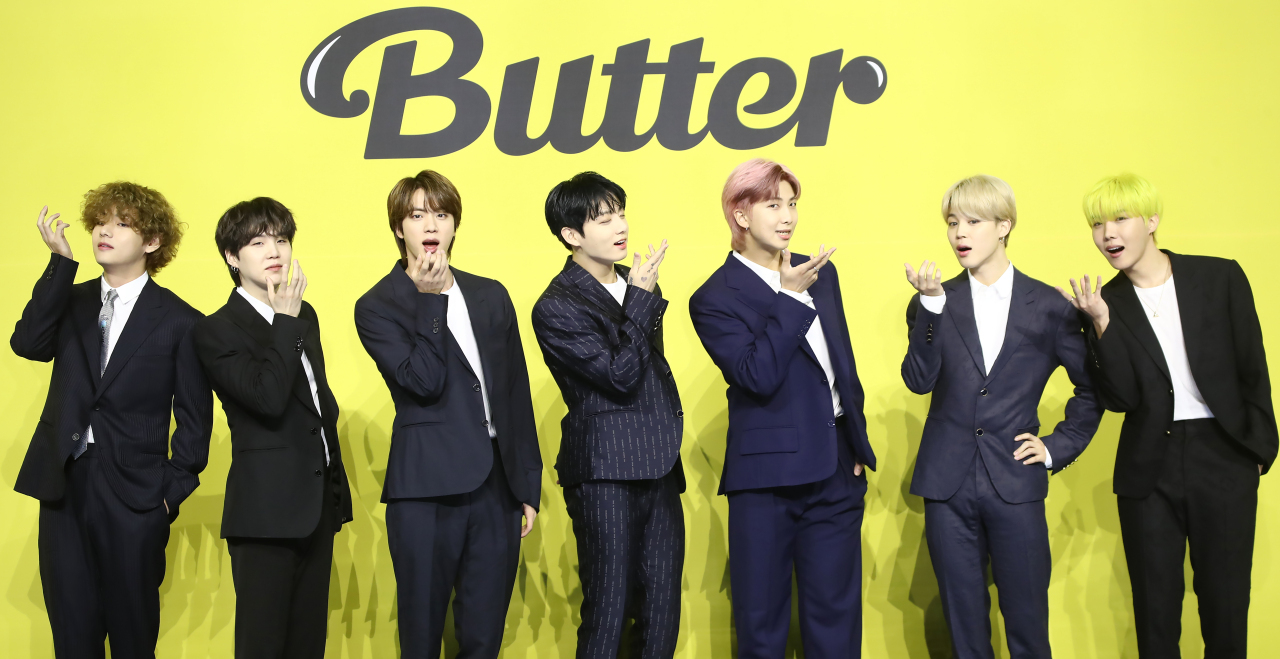 ""Butter" is officially No. 1 on this week's #Hot100 chart for a sixth consecutive week," Billboard said Tuesday (US time) on its Twitter account.

At six weeks, "Butter" is the BTS song with the longest run atop the Hot 100. The seven-piece act now has 11 Billboard Hot 100 No. 1 records, with "Butter" leading the list with six times at No. 1, followed by "Dynamite" with three, and "Life Goes On" and "Savage Love (Laxed - Siren Beat)" with one each.

It has also had the longest run for a song by a group, since American pop acts Mariah Carey and Boyz II Men's 1995 song "One Sweet Day," at No. 1 on the Hot 100 after debuting. "One Sweet Day" held the top spot for 16 weeks.

On a regional level, BTS last month became the first Asian artist to hit No. 1 for four straight weeks. Previously, Japanese singer Kyu Sakamoto held the title with "Sukiyaki" in 1963.

The feat is the latest in BTS' record-breaking spree.

BTS has been refreshing its list of accolades after becoming the first Korean act to debut at No. 1 on the Hot 100 with "Dynamite" in 2020. The group's first English language single also earned its first Grammy nomination.

Later in the year, "Life Goes On," the main track for its album "BE," became the first song predominantly sung in Korean to debut at the top spot on the main singles chart.

When including the group's overall No. 1 songs on the Billboard Hot 100, "Butter" is the fourth song to sit atop the main singles chart.

In addition to "Dynamite" and "Life Goes On," the group also featured in a remix version of "Savage Love (Laxed - Siren Beat)" by Jawsh 687 and Jason Derulo, which ranked No. 1 in October last year.

"Butter," released on May 21, is a vibrant dance-pop track that the group hoped would give off good energy during the global coronavirus pandemic.

Upon its release, it topped iTunes top songs charts in more than 100 regions, as well as music charts in South Korea and Japan, a day after its release.

On YouTube and Spotify, the world's biggest platforms, "Butter" earned 20.9 million streams on its first day of release, marking the most streams in a single day in Spotify's history.

The English-language single also racked up 108.2 million views on YouTube in its first 24 hours of release, outnumbering "Dynamite" at 101.1 million views.

The latest data includes figures for the original and instrumental versions of the song, as well as the remix versions, according to Billboard. It also reflects sales of a 7-inch vinyl and a cassette version, which were initially supposed to be included in last week's data but were postponed due to shipping schedules.

"We're making history together with #BTS_Butter," the group tweeted on its official account. "HUGE thanks to #BTSARMY," referring to the name of its powerful fandom.

"Is this real? Am I not dreaming? Thank you so much," BTS member Suga wrote on the fan community platform Weverse.

RM also thanked fans while adding to the hype over the act's upcoming release "Permission to Dance."

BTS is set to release a physical album for the Billboard-topping hit Friday, which includes "Butter" as well as the new song that is a collaboration with British singer-songwriter Ed Sheeran. It marks the second collaboration between the two acts following "Make It Right" on the 2020 album "Map of the Soul: 7."

"PTD is better. Looking forward to your support and attention. Thank you," he wrote. (Yonhap)