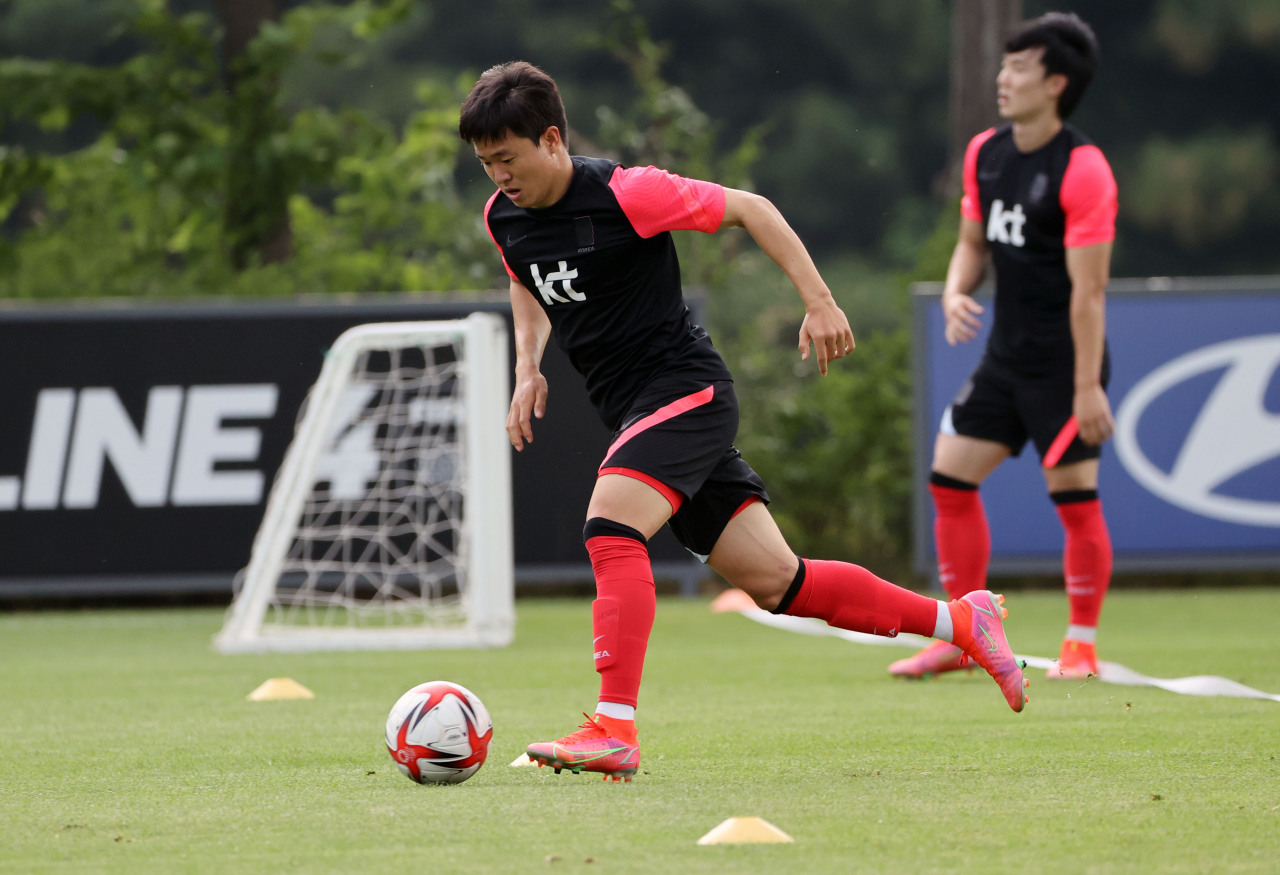 Midfielder Kwon Chang-hoon (left) sprints during a training at National Football Center in Paju Friday. (Yonhap)
On South Korea's 22-man Olympic football roster headed to Tokyo this month, Kwon Chang-hoon is the only player with prior Summer Games experience.

And it wasn't a particularly memorable one, as South Korea got knocked out of the quarterfinals at the 2016 Rio de Janeiro Olympics. Kwon did more than his part, notching three goals and one assist in four matches, but it wasn't enough to send South Korea deeper into the tournament.

Now 27, Kwon is back in the Olympic mix, this time as one of three overage players on the under-24 team. Speaking to reporters before practice on Monday, Kwon said he is ready to share what he learned from Rio with his younger teammates.

"Five years ago, I was so young and inexperienced. Over the course of a competition, a lot of unexpected things can happen, but I didn't know how to keep the team together," Kwon said at the National Football Center in Paju, north of Seoul in Gyeonggi Province. "I think I'll be able to apply lessons I learned with the team here. I feel a sense of responsibility to take this team to great heights."

Kwon, midfielder for Suwon Samsung Bluewings, is joined by FC Girondins de Bordeaux forward Hwang Ui-jo and Beijing Guoan defender Kim Min-jae in the overage group. Kwon, the second-oldest member of the team behind the 28-year-old Hwang, said the trio have already sat down to discuss what they have to do as leaders.

"We said we have to figure out what the team wants from us and do whatever we have to do to help the team," Kwon said. "The guys here have been working so hard. I am not all that worried."

Kwon ended his European stint earlier this year to rejoin Suwon in the K League. He played sparingly for the German side SC Freiburg before coming home and has yet to play for Suwon because the K League has been in midseason break to account for international matches.

That has led to concerns about Kwon's lack of sharpness ahead of a tight Olympic tournament. South Korea will play two tuneup matches next week -- against Argentina on July 13 and then France on July 16 -- and then play three group matches in a seven-day span at the Olympics.

Kwon said flexibility provided by the special expansion of all football rosters -- FIFA granted the addition of four players to the usual 18-man squads, citing COVID-19 concerns -- should make any questions about his fitness a moot point.

"I think (head coach Kim Hak-bum) will make the most of the larger roster and ease the burden on me," Kwon added. (Yonhap)