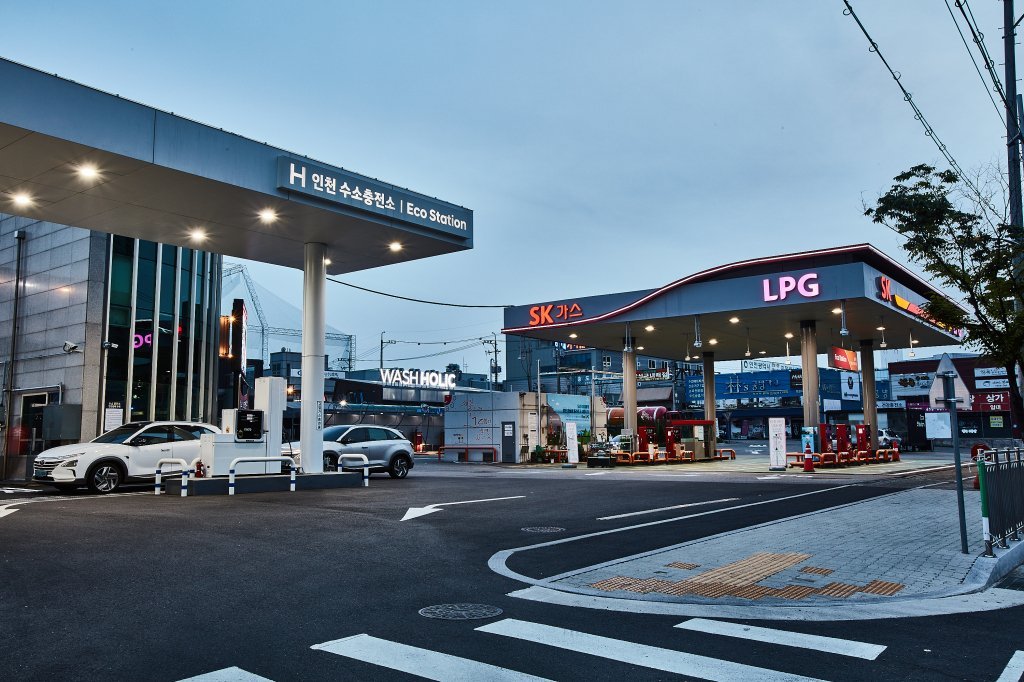 SK Gas' hydrogen fueling station in Incheon, west of Seoul, is seen in this photo provided by SK's gas subsidiary on July 16, 2020. (Yonhap)
South Korean refiners are jacking up investment in the burgeoning hydrogen market to secure their place in a world shifting away from fossil fuels and to get ahead of the next big change in the energy industry.

Hydrogen, which burns clean when mixed with oxygen in a fuel cell, can be used for various industrial purposes, vehicles and ships, but it has been mostly used in oil refining and production of fertilizers.

Large-scale usage of hydrogen requires not only manufacturing factories but also compression, transportation, distribution and conversion facilities, which gives petrochemical companies a competitive edge in building the hydrogen value chain.

As major economies toughen the carbon emission targets and investors get serious about sustainability, major refiners in Asia's fourth-largest economy have been stepping up investment in hydrogen to capture a slice of the growing energy market.

Top refiner SK Innovation is well positioned to take the lead in the hydrogen industry, as its petrochemical and gas subsidiaries can utilize their existing infrastructure and put on a united front under their parent SK Group, the nation's third-largest conglomerate.

"Hydrogen is an eco-friendly energy source suited for the domestic environment as it is not affected by climate and requires less space for production," SK Group Chairman Chey Tae-won said upon announcing the investment plan in March.

As the first stage, SK E&S and SK Incheon Petrochem will join hands to build a liquid hydrogen plant capable of producing 30,000 tons a year in the western port city of Incheon by 2023.

SK E&S will refine byproduct hydrogen from SK Incheon Petrochem's factory to produce liquid hydrogen, which will be supplied to the Seoul metropolitan area.

As part of plans to go beyond its home turf, SK in January acquired 9.9 percent of U.S. fuel cell company Plug Power for $1.6 billion, and it made another strategic investment in Monolith Materials Inc., an American company known for its clean hydrogen production technology, earlier this month. The company did not reveal the amount of investment.

GS Caltex Corp., a joint venture between GS Energy Co. and US oil producer Chevron, is tapping into the liquid hydrogen business in partnership with the state-run Korea Gas Corp. (KOGAS).

GS Caltex and KOGAS plan to build a liquid hydrogen factory with an annual capacity of 10,000 tons on idle land at a KOGAS LNG terminal, which will be enough to power around 80,000 fuel cell cars per year.

The two companies also agreed to build hydrogen charging stations around Seoul and other select regions in time for the completion of the factory in 2024.

"By combining GS Caltex's experience in running gas and charging stations and the experience of KOGAS in the LNG business, the two companies will create synergy in the hydrogen business," GS Caltex CEO Hur Sae-hong said in a release.

In April, Hyundai Oilbank Corp. signed a memorandum of understanding with US hydrogen giant Air Products & Chemicals to use the gas industry leader's technology to produce hydrogen from its crude oil byproducts and natural gas.

Hyundai Oilbank has set a goal to produce 100,000 tons of "blue" hydrogen by 2025, using carbon capture and storage technology to cut CO2 emissions.

"The company aims to reduce its reliance on refining business to 40 percent of the total revenue by 2030 from the current 85 percent," Hyundai Oilbank CEO Kang Dal-ho said. "We'll become a leading green energy platform that earns nearly 70 percent of operating profit from the blue hydrogen, white bio, and eco-friendly chemicals and materials businesses."

S-Oil Corp., the nation's No. 3 refiner owned by Saudi Aramco, has been focusing on the fuel cell system, which converts chemical energy stored by hydrogen fuel into electricity.

In March, S-Oil acquired a 20 percent stake in Fuel Cell Innovations (FCI), a joint venture between Korea and Saudi Arabia, for 8.2 billion won, saying it will invest up to 100 billion won by 2027 to have over 100 megawatts of annual production capacity.

The refiners are not alone in believing hydrogen has potential to become a clean energy fuel in the future.

The government has been promoting hydrogen as one of the growth drivers in the green energy sector and implemented the world's first hydrogen law in February to boost related industries and expand infrastructure.

There are 94 hydrogen fueling stations in the nation as of June, and the government plans to increase the number to 180 by the end of the year.

The hydrogen stations are mainly used for fueling Hyundai Motor's NEXO, the only commercial fuel cell vehicle available in the nation.

Market watchers say that industry players will have to explore ways to drive down expensive prices of hydrogen in the early stage and gradually increase the ratio of green hydrogen to make the fuel a clean alternative.

"For hydrogen to have competitiveness in terms of price, transportation costs, which account for 40 percent of the wholesale price, need to go down," Jun Hye-young, an analyst at KTB Investment & Securities, said. "That's why local companies are focusing on liquid hydrogen, which can save more than 70 percent of logistics costs compared with compressed gaseous hydrogen."