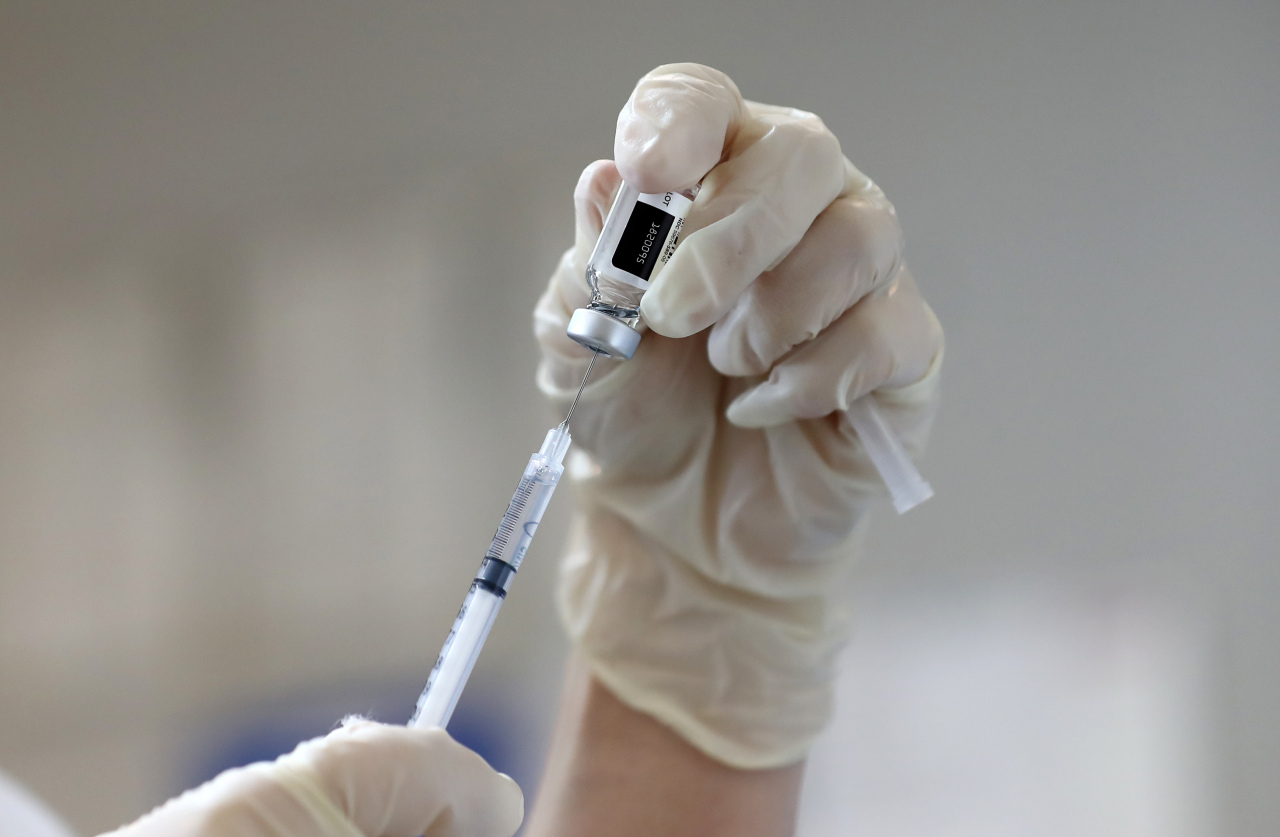 A medical worker prepares Johnson & Johnson‘s COVID-19 Janssen vaccine at a hospital in Daejeon on June 10. (Yonhap)
As a male in my early 30s, and an Army reserve, I was able to receive the Johnson & Johnson COVID-19 vaccine. I work out three times a week, and have no underlying conditions or drug allergies. This is my experience.

The online reservation system for Johnson & Johnson’s COVID-19 Janssen vaccine opened at midnight on June 1. As tens of thousands of people tried to book for their shots at the same time, a waiting list prevented me from accessing the system. I exited the website without making a reservation, feeling that some people wanted it more than I did.

Twelve hours later, I received a KakaoTalk message from a friend who told me that he just made a reservation for the Janssen vaccine. Hoping to catch the last train, I went online and managed to make a reservation for 9 a.m. on June 14. The earliest available date was June 10, but I wanted to see other people’s reviews first before getting the jab.

As expected, I could find many online reviews of people who received their J&J dose after June 10. According to their testimonies, some of the most common side effects included fatigue, fever, headache, body aches, nausea and pain. Others said their appetite increased after being inoculated. None of that gave me concerns at this point.

But on June 13, a day before my reservation, the first death after receiving the Janssen vaccine was reported. He was in his 30s. He died three days after the vaccination. Although there was no clear link between the inoculation and his death, it was more than enough to give me second thoughts.

The next morning, I went to get my shot. Despite the fact it was a children’s hospital, there were several adult men who appeared to be in their 30s. They all came for the same reason. I told the nurse that I was here for the vaccination. She checked my ID and gave me the pre-vaccination screening questionnaire, which asked for my body condition.

After filling out the questionnaire, the nurse called my name. I went into the doctor’s office. The doctor told me the precautions, including staying at the hospital for at least 15 minutes after the injection to monitor my status, paying attention to my body condition for the following three days and refraining from working out and drinking for at least two days.

The injection itself took three seconds.

The injection did not hurt much. As instructed, I waited for 15 minutes in the hospital’s lobby. Other than a little sense of burning and muscles tightening around the injection spot, I felt fine. My body temperature was measured at 36.5 degrees Celsius. So I left the hospital to go home.

After receiving my jab, I kept notes of how I felt every two to three hours. At 12:57 p.m., I had lunch. I could not feel any side effects. My body temperature decreased marginally to 35.5 degrees Celsius.

At 3:29 p.m., the injection spot on my left arm started to feel as if it was bruised. At the same time, I began to feel a bit woozy.

After having dinner at 7:49 p.m., I surprisingly felt better. As health authorities recommended, I had bought a pack of pills that had acetaminophen in case of fever or pain, but it looked like I was not going to need them at the moment. Since some people claimed that they did not experience any side effects after COVID-19 vaccination, I thought that was my case.

As I laid in bed to go to sleep at 10:55 p.m., I for some reason felt like I was going to be sick. My head and body felt heavy. My body temperature marked 36.1 degrees Celsius. I was asleep minutes before midnight. But little did I know, things were escalating quickly inside my body.

About three hours later, I woke up in a sweat. I had the full package -- fever, headache and body aches. I measured my body temperature -- 38.7 degrees Celsius. It was around 18 hours after my vaccination from the previous morning. Hoping that the symptoms would go away soon, I took a pill. I tried to go back to sleep, but shivering kept me awake until around 4 a.m., after my body temperature had dropped to 37.3 degrees Celsius.

I woke up three hours later, feeling like I got hit by a truck. My entire body was in pain. I also felt swelling in my throat. I dragged myself to eat breakfast and took another pain reliever.

At 9:23 a.m., the symptoms were still present. I felt that the headache actually got worse. But my body temperature came down to normal at an even 36 degrees Celsius.

It took over six hours before some of the symptoms eased. At 4:32 p.m., The soreness was gone, except for the feeling of dizziness. By the time I had dinner at 7:19 p.m., I felt that I was back to normal.

As I wrote the last note of the second day after vaccination at 10:32 p.m., the only symptom I had left was tightness in the injection spot on my left arm’s deltoid. That was gone by the next morning.