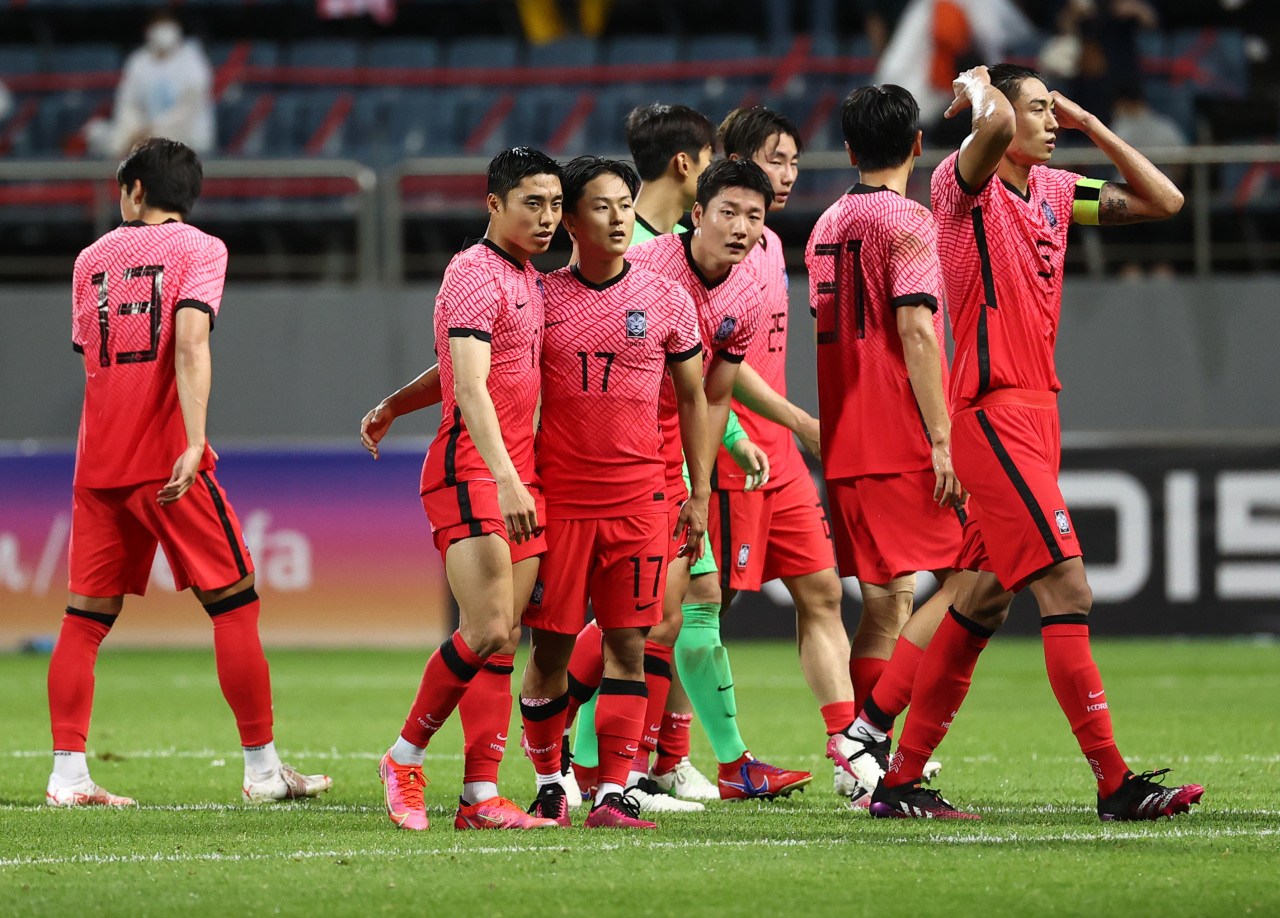 SC Freiburg midfielder Jeong Woo-yeong opened the scoring for the hosts in the 41st minute at Jeju World Cup Stadium in Seogwipo, Jeju Island, with second-half substitute Lee Dong-jun netting the go-ahead goal in the 65th.

This was the last match before head coach Kim Hak-bum finalizes his 18-man roster for the Tokyo Olympics.

The men’s football tournament will be open to players 24 or younger, but countries can each carry up to three players over that age limit.

Kim opened camp on May 31 with 28 players at 24 or under and previously said he would play all 28 in the two friendlies against Ghana.

Kim used 18 players in the first match last Saturday. He then called up two players who had been with the senior national team for World Cup qualifiers earlier in the month, Won Du-jae and Lee Dong-gyeong. Of 30 players on hand, Kim ended up laying 29, with the usual No. 1 goalkeeper Song Bum-keun being the lone exception.

Two backups, Ahn Joon-soo and An Chan-gi, each got into a game in Jeju, as Song is all but assured of his spot on the final squad.

Standing just outside the box with his back to the net, forward Oh Se-hun received a pass from midfielder Kim Dong-hyun and, in one motion, flicked it over to winger Cho Young-wook charging into the area. Cho‘s low shot rang off the left post but rolled right back to Jeong, who poked it into the gaping net with goalkeeper William Emmanuel Essu out of the picture.

The South Korean offense picked up some energy in the final moments of the first half. Lee Kang-in nearly doubled the lead with a curling free kick during injury time, and it took a massive save by Essu to keep it a one-goal affair.

Ghana evened up the score six minutes into the second half, with Joselpho Barnes capitalizing on a misplay by goalkeeper An Chan-gi.

When a long pass sailed in from the South Korean zone, An charged out to the top of the box but hesitated for a split second.

That allowed Osman Bukari to take control of the ball and drag An with him to the right side of the area. Bukari then fed the ball to the middle to Barnes, who scored easily into the open net.

Then a pair of second-half subs combined for a tiebreaking goal for South Korea in the 65th minute. Lee Dong-gyeong split the defense and sent Lee Dong-jun in on goal with a pretty throughball, and Dong-jun made no mistake with his right-footed strike.

Kim will open another training camp next Tuesday. The Korea Football Association (KFA) said earlier Tuesday that Kim will announce his Olympic squad on June 30, though that schedule is subject to change.

Then South Korea will play one last match at home in July before departing for Japan on July 17.

South Korea will take on Romania, Honduras and New Zealand in Group B at the Tokyo Olympics. The top two teams from each of the four groups will advance to the knockout phase. (Yonhap)