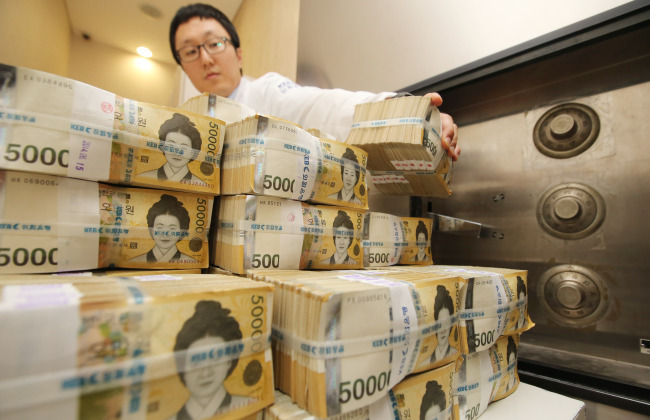 Bundles of 50,000 won banknotes are stacked at a bank in Seoul. (Yonhap)
South Korea’s household debt is inviting concerns about the country’s economic resilience as its accumulated debt has grown more, relative to income, than that of any other economy.

Asia’s fourth-largest economy continues to see a rapid rise in household debt, largely due to increased borrowing to make ends meet in the aftermath of the COVID-19 pandemic and to fund real estate purchases and stock investments amid record-low interest rates.

As of the end of March, outstanding debt held by Korean households reached 1,765 trillion won ($1.58 trillion), up 9.53 percent from a year ago, according to the Bank of Korea.

The latest figure is a letdown for the government, which vowed to bring the annual increase in household debt to between 5 percent and 6 percent this year. The rate stood at 7.9 percent last year.

Experts voiced concern over the high degree of household indebtedness, saying it could lead to systemic risks.

According to a survey released by the central bank on Friday, 46 percent of financial experts identified the rise in household debt as the biggest risk factor for the country’s financial system, followed by a resurgence of COVID-19 and a delay in the vaccine rollout with 37 percent.

“Currently, South Korea’s household debt is the highest in the world in terms of both size and rate of increase relative to nominal gross domestic product,” said Shin Yong-sang, a research fellow at the Korea Institute of Finance.

The country’s household debt-to-GDP ratio increased from 62.7 percent at the end of 2008 to 90.3 percent as of the end of March. The figure is much higher than the global average of 76.1 percent and 81.0 percent for advanced economies.

Behind the surge in household debt is the ultralow key interest rate, which has been left unchanged at an all-time low of 0.50 percent since May last year, resulting in excess liquidity.

“If the country gets closer to achieving over 4 percent economic growth as expected by the government and the BOK, it will be possible to preemptively raise the benchmark rate at least once in the second half of this year,” Shin said.

On the back of strong export growth and expansionary macroeconomic policy, the authorities have recently turned more upbeat about the economic rebound from a contraction of 1.0 percent last year.

The BOK revised up its growth outlook for the country this year by 1 percentage point to 4.0 percent after President Moon Jae-in vowed to achieve the same growth target by the end of the year.

Lee In-ho, an economics professor at Seoul National University, however, said an immediate rate hike is unlikely until the US raises its rate.

“Raising the interest rate before the US could lead to capital outflow from here. It could trigger criticism that the BOK’s rate hike may jeopardize the economic recovery,” he said.