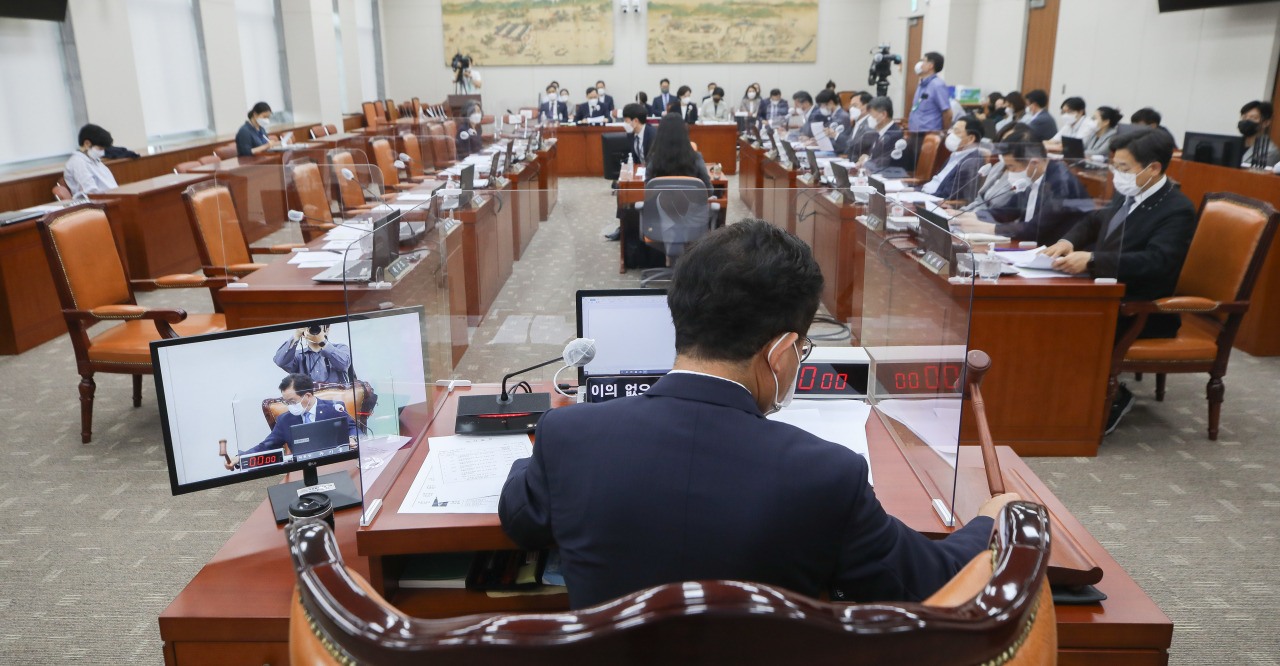 Ruling Democratic Party of Korea lawmakers within the National Assembly’s Education Committee vote on the bill Thursday to establish the National Education Commission with absence of lawmakers from the main opposition People Power Party. (Yonhap)
The official launch of a new educational governance body is in sight as demand grows for comprehensive reform of South Korea’s educational system.

The National Assembly’s Education Committee approved a bill Thursday to install a new body tentatively called the National Education Commission. The bill is expected to be put to a vote at a plenary session within this month in hopes of the commission officially launching by the end of this year.

The president would appoint the head of the commission. Its members would serve three-year terms that could be extended once.

One of President Moon Jae-in’s campaign promises was to establish a politically independent body to oversee the country’s educational policy.

The commission, if established in accordance with the bill, would be tasked with taking the lead in establishing long-term educational policy while the Ministry of Education carried out long-term goals and made short-term adjustments as an administrative body.

The new governance body would likely resemble the Presidential Council on Education but would have greater control over administrative agencies and relevant ministries.

The desire for a new command center in the education sector has intensified over the years, as long-term college admissions policies, evaluation methods and teaching materials are heavily swayed by which party is in control at the moment.

Experts also call for a shift in the educational system at all levels, both for public and private schools, in light of the “fourth industrial revolution” and demographic changes.

Kim Jin-kyung, chair of the presidential council, told reporters in August that much-needed reform in the education sector could not be achieved without the National Education Commission. The new body could also guide Korea through a smooth transition toward individualized, specialized education for students of all backgrounds, he added then.

But the bill faces much opposition in political circles, with opponents questioning the political independence of the new body due to the parliament’s role in selecting its members. The commission would be too friendly to the ruling party, critics say.

Considering that the commission would operate according to a majority vote, they say the ruling party and its affiliated commission members could essentially control the approval process and ignore social consensus and opposition from other members.

“The bill categorizes the National Education Commission as a presidential body, not an independent agency like the National Human Rights Commission,” said the Korean Federation of Teachers’ Associations in a statement Wednesday.

“And most of its tasks and responsibilities are to be decided under presidential commands, which cannot assure the independence of the commission’s administration and activities.”

The bill also faces immense protests from opposition party lawmakers because Democratic Party lawmakers processed the bill by themselves at the committee level, without negotiating with Education Committee members affiliated with the main opposition People Power Party.

The ruling party is accused of processing the bill at the very last moment as a means to maintain control over the government even after Moon’s term ends, even though it had years to discuss the matter among lawmakers.

Moon started his five-year term in May 2017 and has less than a year left in office, but real discussion about the National Education Commission has only started in recent months.

Nine legislative proposals have been brought forward since 2017 to address the matter, but all the others failed to reach the discussion stage at the committee level.