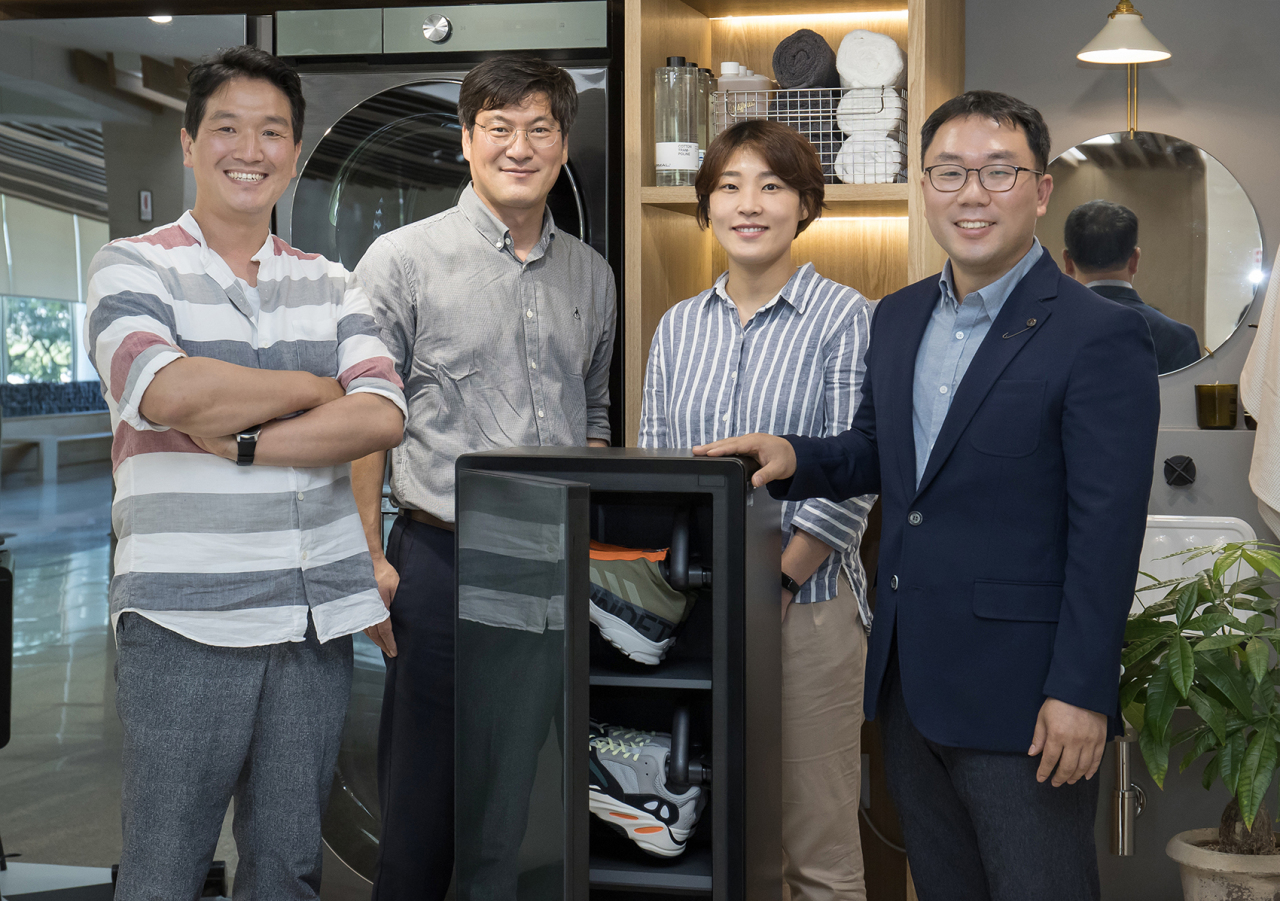 From left: Lee Jung-hee, Ko Young-chul, Kim Myoung-sun and Seo Dong-pil of Samsung Electronics’ consumer electronics business pose with a ShoeDresser product exhibited in the lobby of the company headquarters in Suwon, Gyeonggi Province, on June 4. (Samsung Electronics)
One day, Koreans might bid adieu to bulky wooden shoe closets at the entrances of their apartments.

Samsung ShoeDresser, a brand new category of home appliance, could replace old closets, changing entirely the way people store and care for their shoes, and also reflecting the importance of the fashion item to millennials.

After launching clothing care system AirDresser in 2018, Samsung’s engineers at the consumer electronics unit caught the growing trend of shoe-lovers, which led to the idea of developing a whole new type of appliance.

“As the clothing care system market is getting bigger, we found that people also want to care for shoes, with some even attempting to clean their shoes with AirDresser,” said Kim Myoung-sun, a product planner at Samsung during an interview with The Korea Herald.

A group of engineers embarked on market research and product design of an electronic shoe closet in January 2019.

“We went through a lot of trial and error up until the first prototype was completed,” said Seo Dong-pil who participated in the product development. “Our team bought over 1,000 pairs of shoes of different types of materials, including suede boots, golf shoes, rain boots and climbing shoes, to find an optimal temperature that would not damage the shoes.”

The team focused on three features: deodorization, dehumidification and sterilization.

To remove odor, Samsung developed what it calls “heat pump” technology that dries shoes at temperatures below 40 degrees Celsius.

Using the team’s new shoe hanger, named “Shoe Tree,” mild heat and air clean out the inside of the shoes by removing odor.

Samsung’s photo-catalyst technology that is also used in the AirDresser then breaks down odors.

“The key technology here is to deodorize shoes and decompose the odors inside the product,” said Lee Jung-hee, another engineer of the team. “We ensured the smell does not come out of the closet.”

So, how to clean the shoes does matter, especially as personal hygiene becomes more important amid the COVID-19 pandemic.

Samsung has introduced ShoeDresser as the first home appliance to feature the Xenon UVC lamp technology that boasts a longer life cycle than the mercury-based UVC lamps that are widely used for cup UV sterilizers.

“Samsung is joining the global move to reduce the use of mercury in consumer products,” said Ko Young-chul, the engineer who developed the Xenon UVC lamp for ShoeDresser. “To remove mercury from our product, we had to find something that provides a sufficient amount of light that is effective for sterilization and a longer lifespan at the same time, considering the product’s 10-year warranty.”

“We thought of using Xenon gas, which gives a stronger light than UVC-LED lamps and has a longer life cycle that mercury lamps, making the ShoeDresser the first application,” Ko said.

The Xenon UVC lamp turned out to be superior in sterilization for shoes to using steam, which requires a higher temperature of over 100 degrees Celsius, Seo said.

“We found out that steam sterilization could leave water marks on wet shoes that were worn in rainy days,” Seo said. “Xenon was the best choice for sterilizing without water.”

It has been less than a month since the ShoeDresser’s debut on May 27, but Samsung is already getting a positive reaction from the market for the shoe closet.

“The product could be supplied en masse for new apartments through construction companies or indoor screen golf places where people have to borrow and put on golf shoes worn by someone else,” Lee said. “In the past, there was no power outlet in the bathroom at home, but it has become essential to have multiple power outlets as electronic devices appear. We could also have a power outlet in the entrance of each house to install ShoeDresser.”

The company also has a plan for global expansion of ShoeDresser as another lifestyle appliance.

“The market for ShoeDresser could expand upon a new trend that consumers in Western countries have started to take off shoes at home for hygienic reasons after experiencing the virus outbreak,” Kim said.