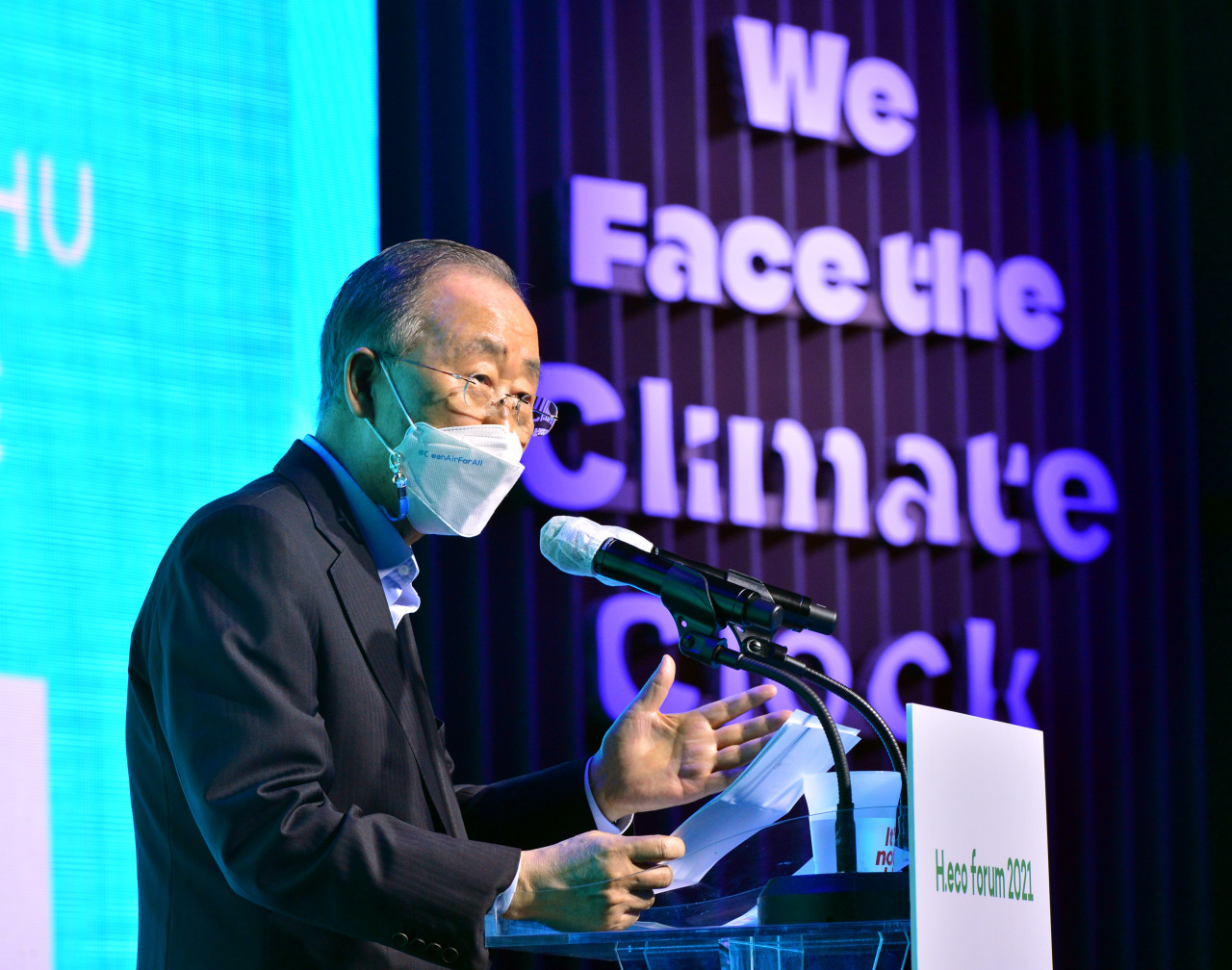 Ban Ki-moon, former UN secretary-general and president and chair of the Global Green Growth Institute, stresses the need for unified efforts at governmental, business and individual levels for the 2050 carbon neutrality goal in his keynote speech at H.eco Forum 2021 in Seoul, Thursday. (Park Hyun-koo/The Korea Herald)
Herald Corp.’s first H.eco Forum opened in Seoul on Thursday, delivering a reality check -- that the Earth has about six years and 235 days to prevent the effects of global warming from becoming irreversible -- and yet signaling hope that we can still avert a climate catastrophe.

Under the theme “We face the Climate Clock,” the forum, which was livestreamed, gathered global leaders, businesspeople and activists to discuss solutions to the climate emergency at every level and show a path toward a net-zero, sustainable future.

Due to the COVID-19 pandemic, H.eco Forum 2021 was held in a hybrid format, with speakers based in Seoul giving speeches in person and foreign speakers participating virtually -- from countries including Colombia, Switzerland and the UK.

In compliance with the government’s social distancing rules, only a limited number of distinguished speakers and guests were present at the forum in person, including Jungheung Group Vice Chairman Jung Won-ju and Kim Dong-yeon, chairman of the Joyful Rebellion Foundation and former deputy prime minister. 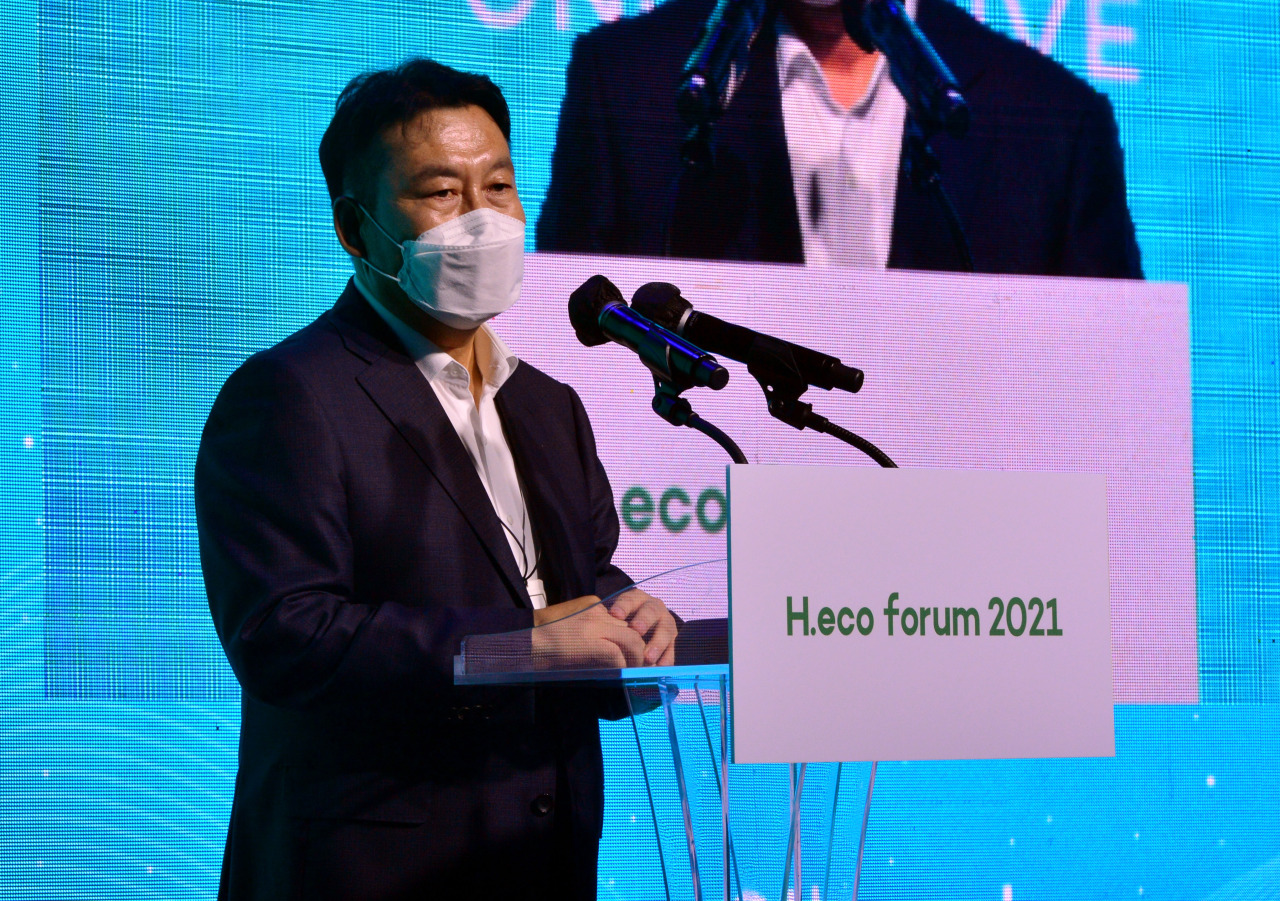 Jeon Chang-hyeop, Herald Corp. CEO & Publisher gives welcoming remarks at H.eco Forum 2021 held in Seoul, Thursday. (Park Hyun-koo/The Korea Herald)
“Six years and 220 days. Depending on how we see it, it could be a long time or a short time,” Jeon Chang-hyeop, Herald Corp. CEO and publisher, said in his welcoming remarks, referring to the Climate Clock installed on the roof of Herald Corp.’s headquarters.

Last month, Herald Corp. installed the monumental Climate Clock, the third in the world and the first in Asia, as part of a campaign to raise awareness of the climate crisis and send a direct visual warning that the Earth has a deadline.

H.eco Forum 2021 opens with a video introducing the Climate Clock, which is the third to be built in the world. (Park Hyun-koo/The Korea Herald)
“It is a warning that we will not be able to lead such a normal daily life that we have if emissions continue at the current rate,” he said. “That’s why Herald Corp. is launching the H.eco Forum, declaring itself as an environmentally friendly company.”

President Moon Jae-in welcomed the launch of the H.eco Forum, hailing Herald Corp. for “taking the initiative in responding to climate change.”

“The Climate Clock that has been installed on the roof of Herald Corp. shows the seriousness of carbon dioxide emissions into the environment,” Moon said in a congratulatory message. “I would hope that today’s forum will be able to discuss the issue of climate change in various dimensions.” 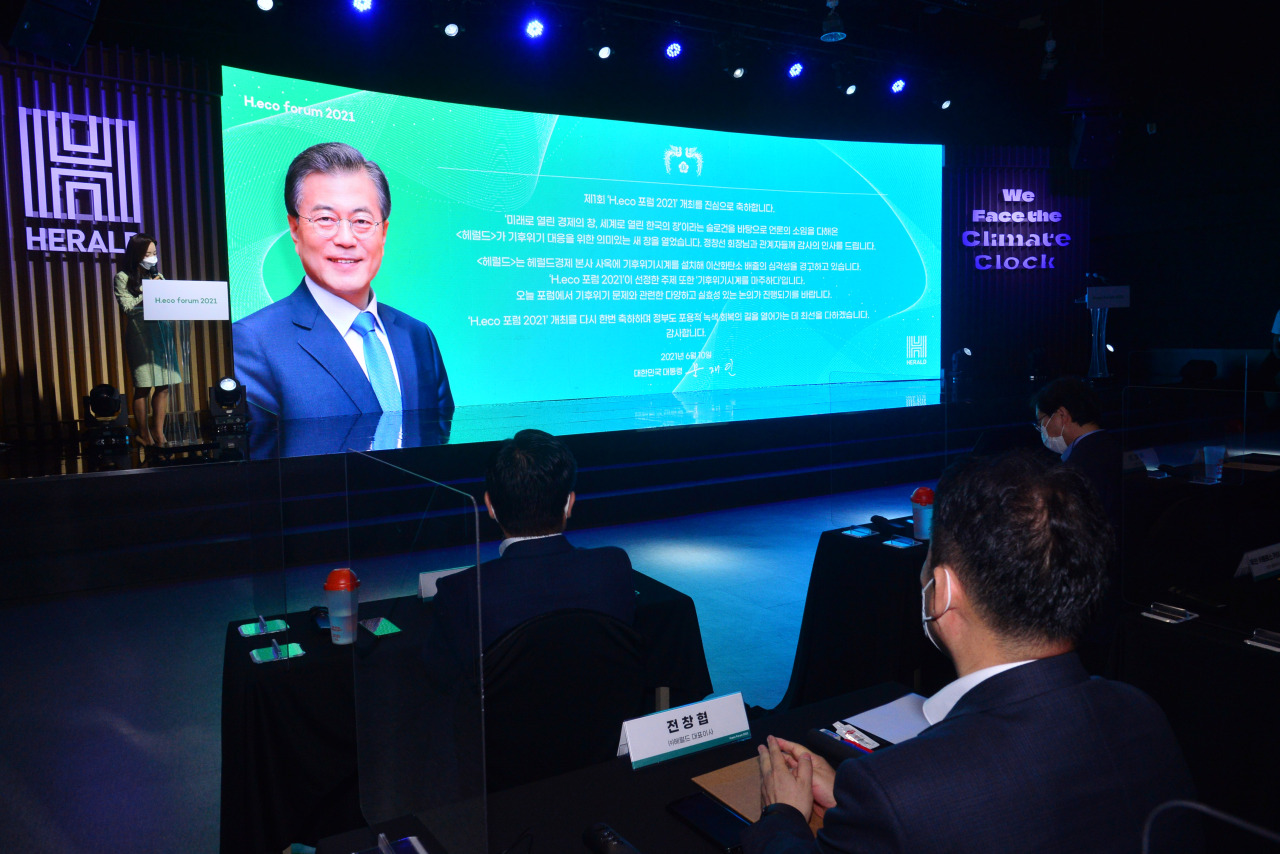 President Moon Jae-in welcomes the launch of the H.eco Forum in his congratulatory message. (Park Hyun-koo/The Korea Herald)
Vice Environment Minister Hong Jeong-kee and Kim Sung-joo of the Democratic Party of Korea, who heads the National Assembly’s ESG forum, also welcomed the hosting of the forum, expressing hope that it would be a platform to raise awareness of environmental challenges.

Opening the forum was a keynote speech by former UN Secretary-General Ban Ki-moon, whose role was critical in bringing the entire world together to the Paris Climate Agreement during his 10-year tenure.

In a speech titled “Humankind’s response to climate crisis,” Ban called for a unified response at the transnational, governmental, business and individual levels to tackle climate change.

President Moon’s pledge to go carbon-free by 2050 entails a political and moral burden, Ban said, stressing the need to follow up on the vow no matter who becomes president in the coming decade.

“The goal of achieving carbon neutrality by 2050 was laid out by this administration, but the next six administrations must have will and determination to accomplish the goal,” he said, adding that technological innovation, policy suitability and market movement should go hand in hand to make Korea carbon neutral.

Participating from Switzerland, Gerd Leonhard, a renowned futurist and CEO of The Futures Agency, talked in his keynote speech about how the traditional economic model -- focusing on profit and growth -- is unfit for the future.

“We are going to have more money but there won’t be any planet to spend it on. You can’t do business on a broken planet,” he said, showing global capital stocks per capita in which produced capital is increasing, human capital is staying stagnant and natural capital is declining.

“The future of our world is the circular economy, is sustainable, or there will not be a future,” he said, adding that we have all the tools -- science and technology -- and what we need now is the will. 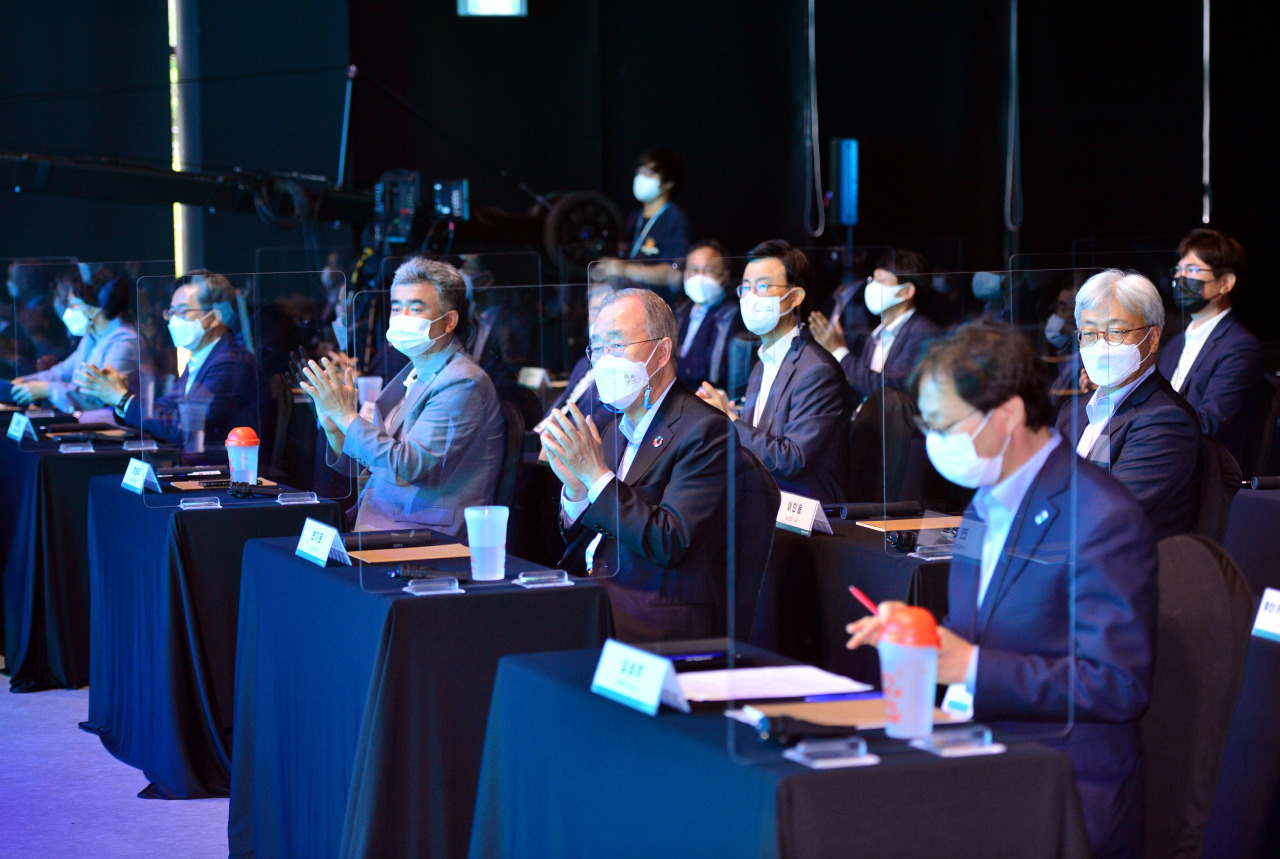 Only a limited number of distinguished guests were present at the forum in person, including Jungheung Group Vice Chairman Jung Won-ju and Kim Dong-yeon, chairman of the Joyful Rebellion Foundation and former deputy prime minister. (Park Hyun-koo/The Korea Herald)
Following the keynote speeches, the forum went on to explore the role of governments, businesses and individuals in fighting climate change.

Opening the first session was Yun Sun-jin, co-chairperson of Korea’s 2050 Carbon Neutrality Commission, who discussed the country’s road to a green transition and net zero emissions. Juan Manuel Santos, who was president of Colombia from 2010 to 2018 and won the Nobel Peace Prize in 2016, shared Colombia’s experience of protecting biodiversity and highlighted the need for a global green recovery from the COVID-19 pandemic. John Murton, the UK government’s COP26 envoy, said that focus should be on four areas -- mitigation, adaptation, finance and collaboration -- to overcome the climate crisis.

The second session, which started after lunch, looked into industry efforts for a green transition. Matthias Bausenwein, president of Orsted Asia Pacific, shared the Danish firm’s experiences surrounding its remarkable transformation from a traditional fossil-fuel company into a renewable energy giant. Sam Kimmins, who is leading the Climate Group’s global RE100 campaign, introduced how the initiative is accelerating change toward zero-carbon grids at scale and why more companies should join it for their own survival. The session ended with Oh Jeong-hwa, director of Amorepacific’s Sustainability Division, introducing the cosmetics firm’s eco-friendly drive to cut emissions in its production lines.

The special session featured celebrated artists who produced a series of experimental artworks called “Heartbeat of the Earth,” in collaboration with the Google Arts & Culture Lab. Using their creative interpretation, the artists showcased their take on climate data to visualize rising sea levels, acidifying oceans and more.

In the third session, themed climate change activism, Yoon Hyeon-jeong, teenage activist for Youth 4 Climate Action, emphasized that the climate crisis is a human rights problem and requires action by the government, rather than individuals, to combat it. On the other hand, American rapper and filmmaker Prince Ea motivated the audience to act on climate change as individuals – changing their lifestyles, habits and mindset -- to make a difference for the planet.

Closing H.eco Forum 2021 was a panel discussion moderated by Greenpeace campaigner Jane Yu. Activists including Kim Seo-gyung, who is a member of a global group of K-pop fans fighting for climate change, Jo Eun-byeol and film director Kim Jae-han had a fierce discussion about the importance of solidarity for climate action.