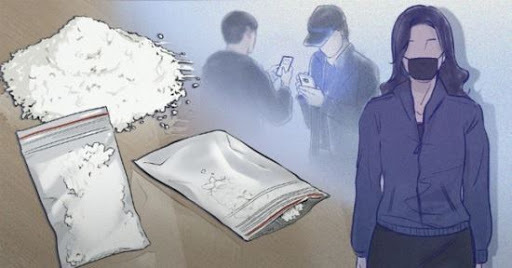 According to the 2020 juridical yearbook, published recently by the Supreme Prosecutors Office (SPO), a total of 18,050 people were nabbed for drug-related crimes last year, up 12.5 percent from a year before.

The 2020 figure marks the highest yearly number of drug offenders ever since the SPO began to compile the official data in 1990.

Of the apprehended, 4,793 were drug manufacturers and traffickers, up 13.4 percent on-year.

The report attributed the recent increase mainly to the prevalence of drug dealings on global online platforms, such as the dark web and social network services, which facilitate easy contact between drug providers and consumers.

Such easier contact, in particular, drove up drug crimes among young people aged 19 and below. The number of drug offenders in the age bracket surged by 31 percent to 313, the report showed.

"More teenagers are buying illegal drugs out of curiosity as they are easily exposed to advertisements on narcotics on internet portals and social media," the SPO said.

Thai nationals accounted for 45.2 percent of the total drug crimes by foreigners, recorded in 2020, followed by Chinese at 20.7 percent, Vietnamese at 7.4 percent and Americans at 6.4 percent.

The prosecution said they will focus their investigative capacity on blocking cross-border drug trafficking by strengthening cooperation with international authorities. (Yonhap)