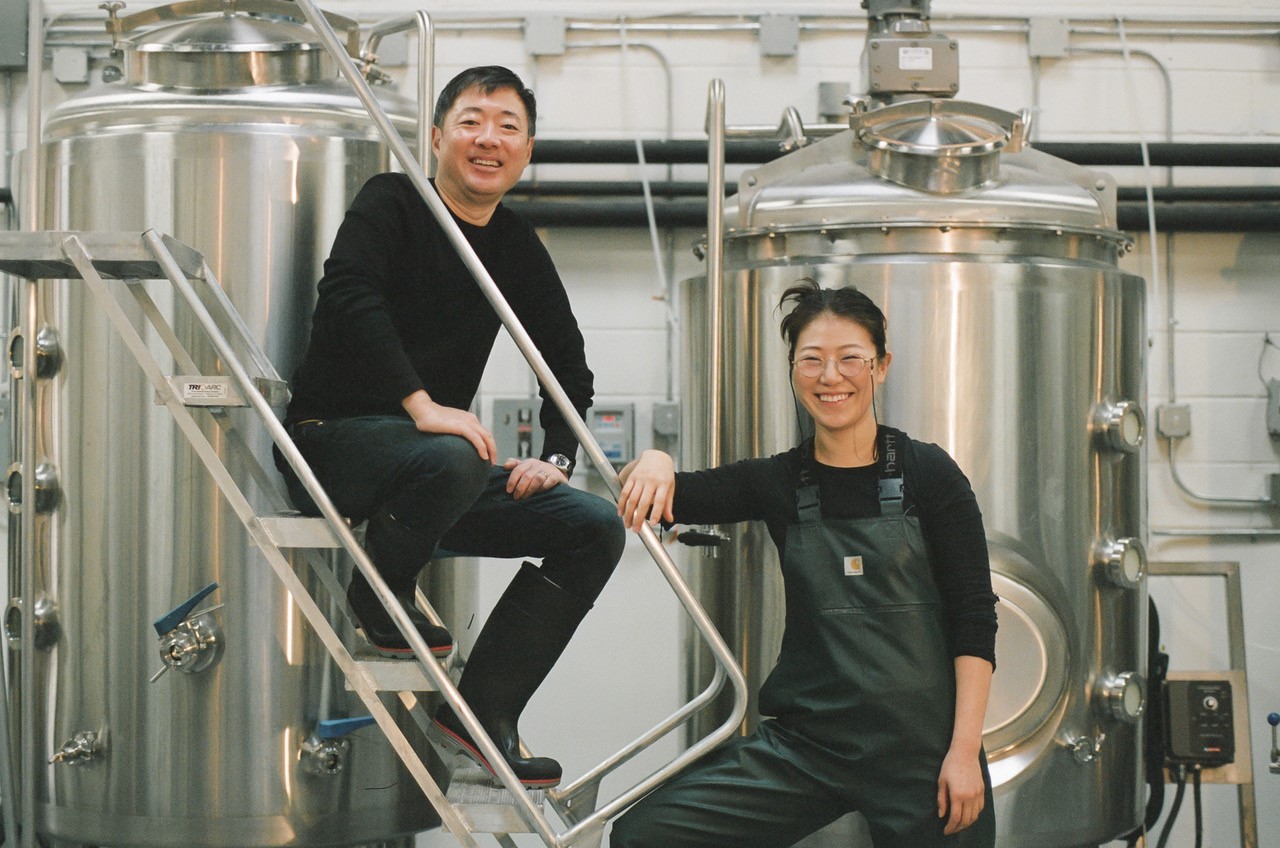 Jun, 28, admits to being surprised by the positive response -- the kind of sales she expected to see two to three years into business, not in less than a year.

To meet demand and give everyone a fair chance at tasting their takju, Jun and managing partner John Limb instituted a bottle limit per order when stock was running low.

Now the duo is tapping WeFunder, a crowdfunding platform, to raise funds for another brewing tank and a taproom, which is slated to open to the public in about a month.

At the moment, Hana Makgeolli ships throughout the US, but Jun said she has received inquiries about exporting to Canada and Korea.

Jun has turned down the requests for the moment, telling would-be exporters, “Be patient with us, we are still a small producer.”

Hana Makgeolli founder and brewer Alice Jun (right) and managing partner John Limb (Hana Makgeolli)
By small, Jun means about 1,100-plus liters a month, about 12 times the amount she brewed when she first started getting serious about crafting traditional Korean alcohol.

So what is fueling this response to artisanal Korean alcohol?

Sitting back in Hana Makgeolli’s brewery and taproom, with the sun setting in the back and her chill canine, Chapsal, relaxing on the floor, Jun does not hesitate to theorize that the rise of wild fermented beers and Korean food in the US are a factor.

Even before all that, however, Jun decided she wanted to transition from homebrewing as a hobby to brewing as a profession about six years ago.

The year was 2015 and Jun already knew how to homebrew, having watched her father make makgeolli from when she was young.

In fact, her father started homebrewing the year she was born. 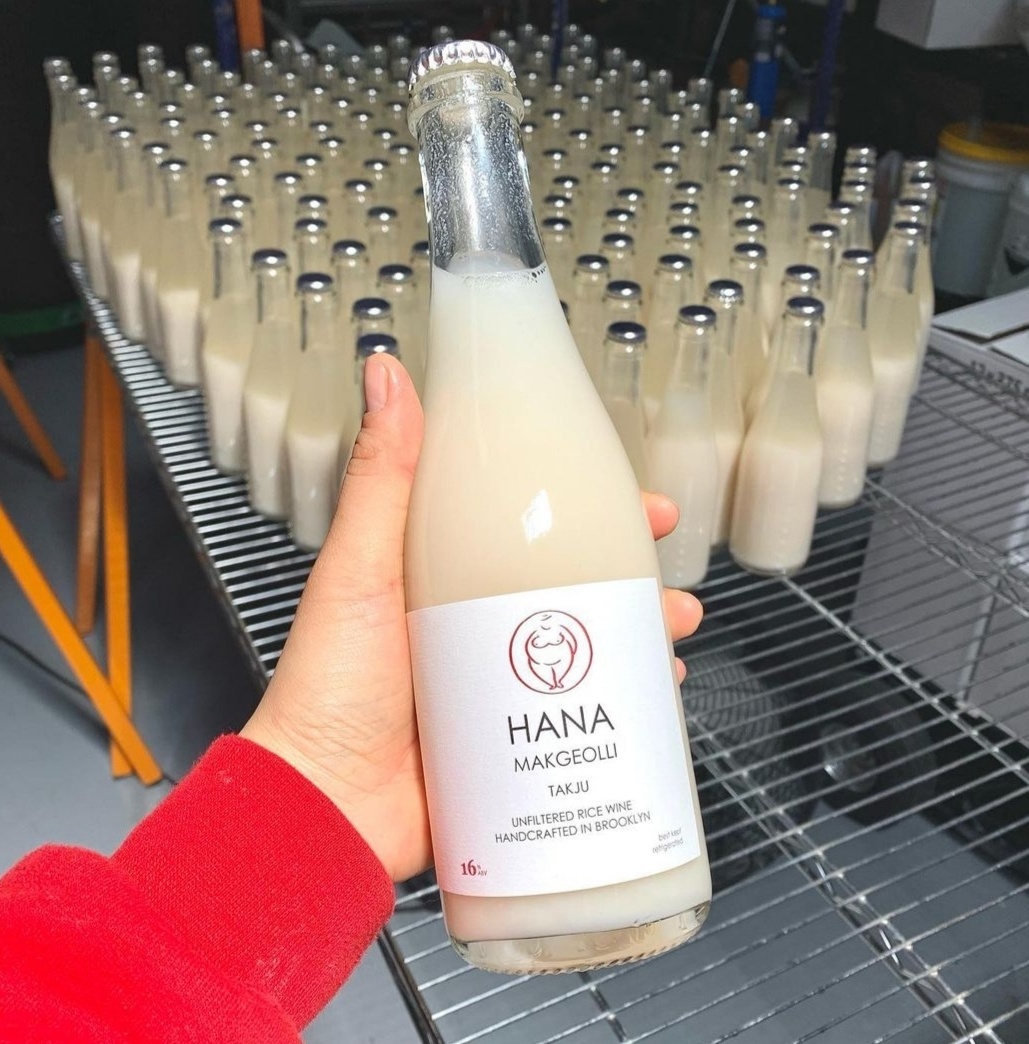 Hana Makgeolli’s Takju 16 undergoes a three-step fermentation process. (Hana Makgeolli)
“After I graduated from college I went to Seoul for a month,” said Jun in an online interview from her brewery in Brooklyn.

In Seoul, she learned more about brewing makgeolli at Susubori Academy via the Sool Company.

After returning from Seoul armed with more knowledge of how to craft Korean traditional alcohol, she started brewing again, but with the aim of sharing her brews with the public.

“John believed in me,” Jun said, explaining how she gained the impetus to open Hana Makgeolli with Limb.

In the fall of 2020, she and Limb officially launched Hana Makgeolli.

To produce the additive-free, artisanal Korean alcoholic beverage, all the brews are crafted from medium-grain rice and glutinous rice grown in Maxwell, California, a wheat-and-barley “nuruk” -- a fermentation starter -- sourced from Korea’s Gwangju and filtered New York water.

“Water matters in all forms of fermentation,” Jun elaborated. “New York water is probably one of the cleanest.”

While the ingredients are pared down, the brewing process is not.

“We are very respectful of the tradition of ‘sul,’” said Jun, who explained how the rice for their brew is stone-ground to reduce the amount of heat produced during the pulverizing process. 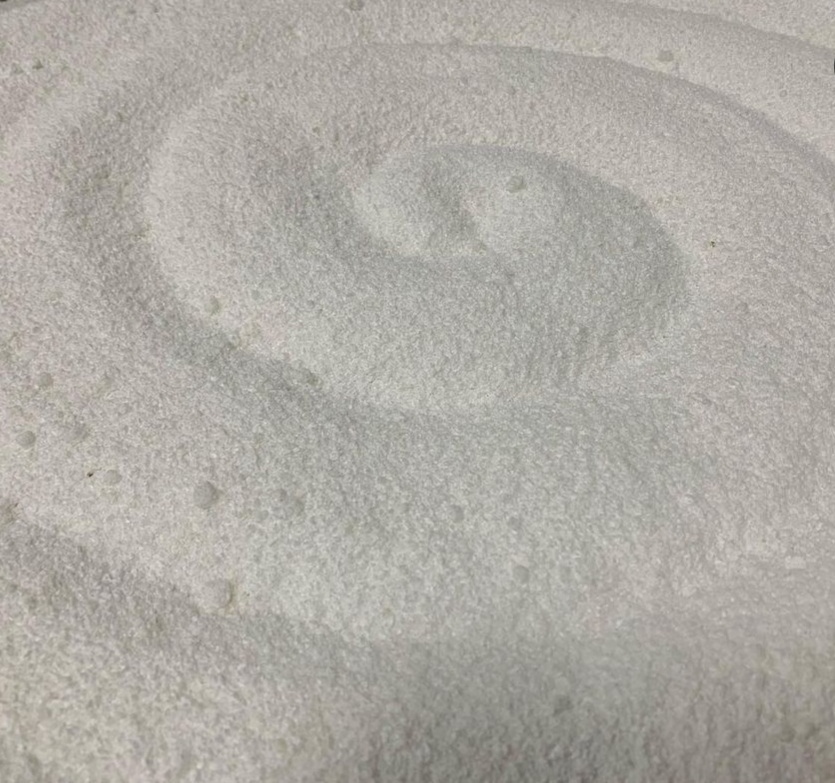 Alice Jun and her team create picturesque spirals before steaming the stone-ground rice for their brews, to create more surface area. (Hana Makgeolli)
Then, when steaming the pulverized rice in cabinet steamers, Jun and her team create beautiful, picturesque spirals not simply for aesthetic reasons, but to create “more surface area,” Jun explained.

All of this takes time.

All that hard work translates to an unfiltered rice beverage with a 16 percent alcohol by volume, much higher than traditional makgeolli, which averages around 6 percent ABV. Hence Jun and Limb refer to their beverage as takju and not makgeolli.

Of their takju, Jun described its flavor profile as “super fruity,” redolent of “melon, pineapple and green apple” and “very dry.”

“We do have quite a lot of lactic acid in our brews,” Jun added.

Plans are to continue to add to the lineup, including a “true makgeolli” according to Jun.

Limb elaborated on the upcoming addition, explaining how it would clock in at around 9 percent ABV. 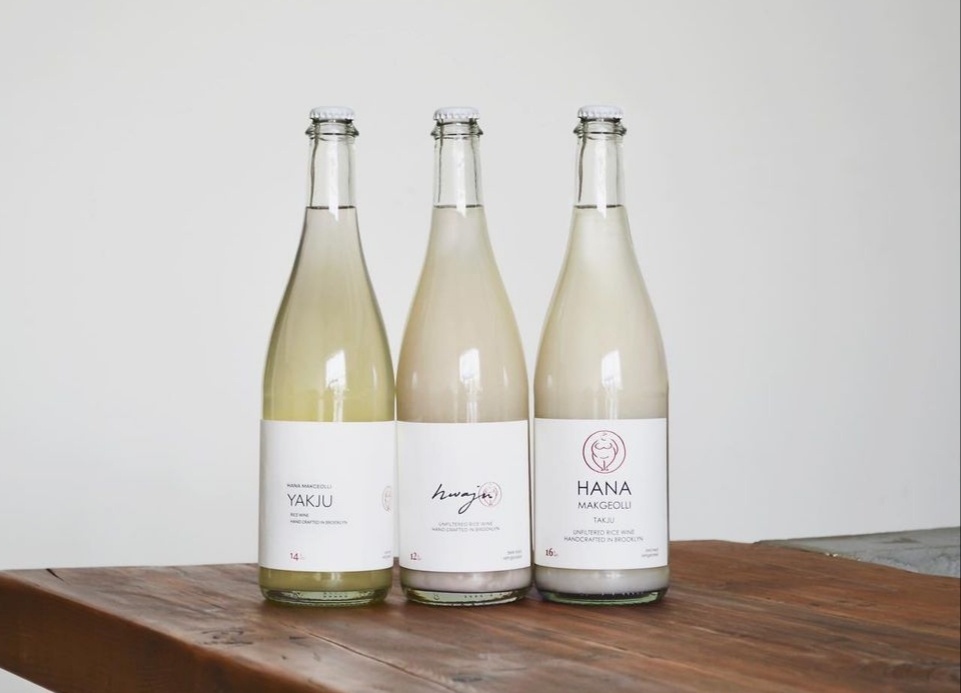 Hana Makgeolli produces three brews that are crafted from rice grown in Maxwell, California, a wheat-and-barley “nuruk” from Gwangju and filtered New York water. (Hana Makgeolli)
Also, due to the need to ship nationwide, all Hana Makgeolli’s brews are currently pasteurized, but plans are to introduce a draft makgeolli when the taproom in Brooklyn opens.

“We will be serving our regular lineup,” Limb, 52, said during the online interview, and customers “can ask for the unpasteurized product.”

While makgeolli is not new to the US -- there is Makku, for example -- as far as Limb is aware, Hana Makgeolli may be one of the few artisanal Korean brewers to be currently producing makgeolli or takju on American turf.

Makku is currently being brewed in Korea.

Jun intends to continue to grow the business, having created a sustainable brewery in New York, and aims to become “the leading provider of traditional Korean alcohol in the US.”