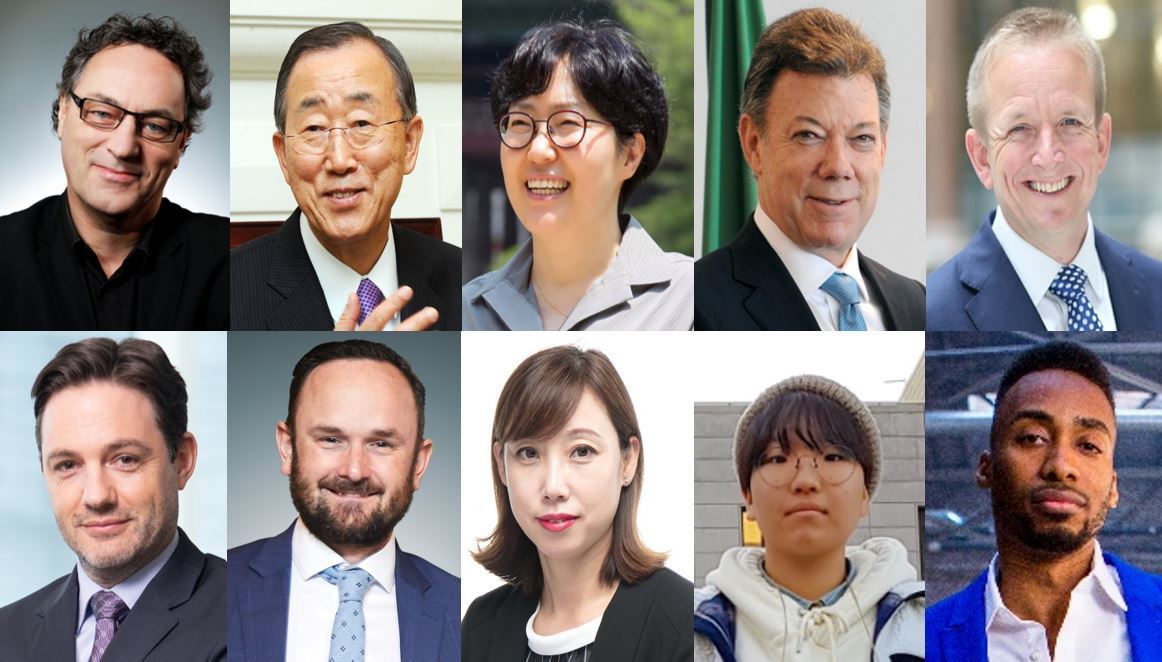 Clockwise from top left: Gerd Leonhard, Ban Ki-moon, Yun Sun-jin, Juan Manuel Santos, John Murton, Matthias Bausenwein, Sam Kimmins, Oh Jeong-hwa, Yoon Hyeon-jeong, Prince Ea (The Korea Herald)
If emissions continue at the current rate, the Earth has about six years and 235 days before the effects of global warming become irreversible. That is what the Climate Clock installed on the roof of Herald Corp. headquarters shows as of June.

To turn back the Climate Clock, Herald Corp., which owns South Korea’s two major news outlets -- The Korea Herald and The Herald Business -- holds its first H.eco Forum on Thursday in Seoul.

To give an overview of where we stand in terms of climate change and discuss what solutions exist to avert a climate catastrophe, the forum brings together policymakers, businesspeople, scholars and activists to share their insights, experiences and action plans.

The forum’s three sessions will explore the role of governments, businesses and individuals in fighting climate change. A special session is also to be held featuring celebrated artists who took part in the climate impact project.

Due to the COVID-19 pandemic, H.eco Forum 2021 is held in a hybrid format, with speakers based in Seoul set to give speeches in person and foreign speakers to participate virtually from where they are -- from Colombia, Switzerland to the UK.

Under the theme “We face the Climate Clock,” the forum opens with a video introducing the Climate Clock -- the science behind it and what it tells us -- and the behind-the-scenes story of bringing the monument-sized clock to Seoul, which is the third to be built in the world. 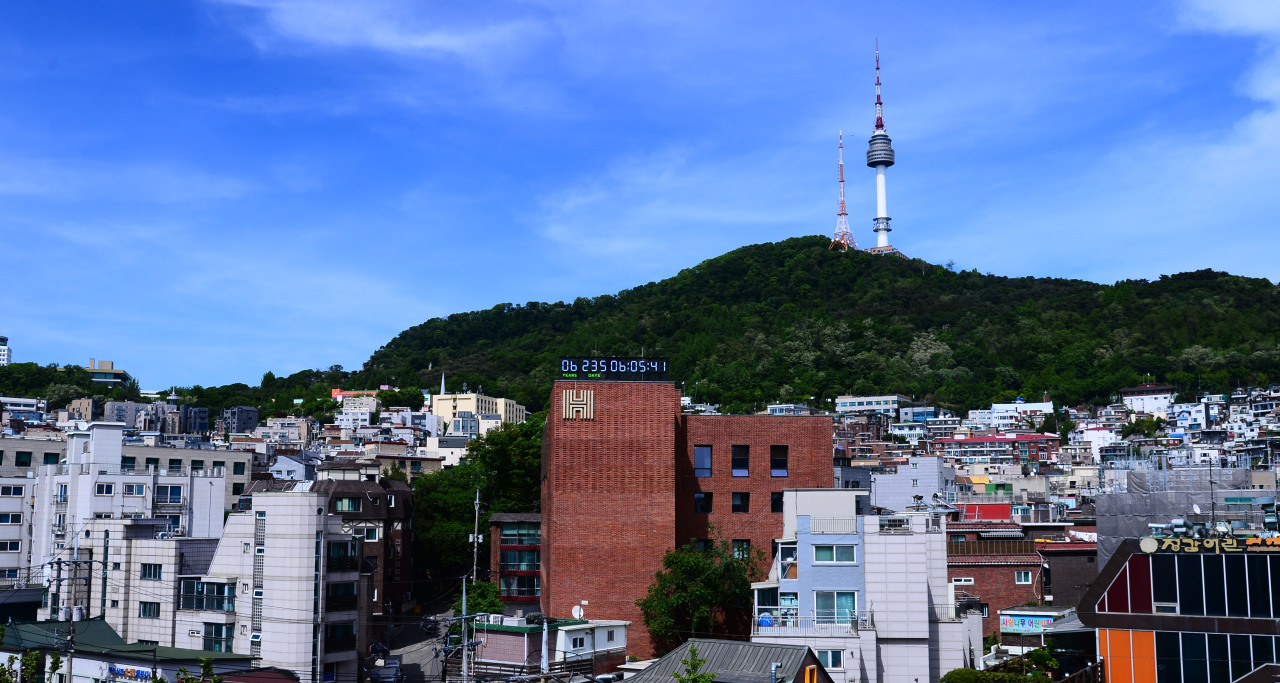 The monument-sized Climate Clock, the third of its kind in the world and the first in Korea, is set up on the roof of the Herald Corp. headquarters office in Huam-dong, Yongsan-gu, Seoul. The Climate Clock shows that the Earth has about six years, 235 days, six hours, six minutes and 42 seconds left before climate change becomes irreversible, based on current emission rates. (Park Hae-mook/The Herald Business)
Last month, Herald Corp. installed the Climate Clock at its headquarters in central Seoul, as part of a campaign to raise awareness of climate crisis and send a direct visual warning that the Earth has a deadline.

Former UN Secretary-General Ban Ki-moon, whose role was critical in bringing the entire world together to the Paris Climate Agreement during his 10-year tenure, and renowned futurist Gerd Leonhard, who has authored five bestselling books including “Technology vs. Humanity,” are to give keynote speeches. Ban will talk about humankind’s response to the climate crisis and Leonhard will speak on why a circular economy is the answer and sustainability is the new source of profit.

(The Korea Herald)
The first session looks closely into government policies, and the importance of international cooperation and political leadership in tackling climate change. Opening the first session is Yun Sun-jin, co-chairperson of Korea’s 2050 Carbon Neutrality Commission, who is to present on the country’s road to a green transition and net-zero emissions. Juan Manuel Santos, who was president of Colombia from 2010 to 2018 and won the Nobel Peace Prize in 2016, will share Colombia’s experience in protecting biodiversity and highlight the need for a global green recovery from the COVID-19 pandemic. John Murton, the UK government’s envoy for the 26th round of vital UN Climate talks, called COP26, is to speak about the UK’s efforts to push governments around the world to strengthen their carbon-reduction targets in the lead up to the COP26 in Glasgow, Scotland, in November, and four areas to focus on to overcome the climate crisis.

The second session, which resumes after lunch, touches on industry efforts for a green transition and best practices will be showcased. Matthias Bausenwein, president of Orsted Asia Pacific, is to share experiences of the Danish firm’s remarkable transformation from a traditional fossil-fuel company into a renewable energy giant and its vision for the world that runs entirely on green energy. Sam Kimmins, who is leading the Climate Group’s global RE100 campaign, is to introduce how their initiative is accelerating change toward zero carbon grids at scale and why more companies should join it for their own survival. The session ends with Oh Jeong-hwa, director of Amorepacific’s Sustainability Division, who is to talk about the cosmetics firm’s eco-friendly drive to cut emissions in their production lines.

Following the second session, a special session is to be held involving artists, who created a series of experimental artworks called “Heartbeat of the Earth,” in collaboration with the Google Arts & Culture Lab and the United Nations Framework Convention on Climate Change. Using their creative interpretation, the artists are to showcase their take on climate data to visualize rising sea levels, acidifying oceans and more.

The third session is dedicated to underscoring the role of climate change activism. Yoon Hyeon-jeong, teenage activist for Youth 4 Climate Action, is to address the audience on how young people are excluded from making decisions surrounding climate change. American rapper Prince Ea, who has made motivational video content on various topics such as climate change, racism and spirituality, is to talk about how individual actions and changes to our lifestyles, habits and mindset can make a difference for the planet.

Closing the H.eco Forum 2021 is a panel discussion moderated by Greenpeace campaigner Jane Yu. Activists including Kim Seo-gyung, who is a member of a global group of K-pop fans fighting for climate change, Jo Eun-byeol and film director Kim Jae-han will join the talk on the importance of solidarity for climate action. 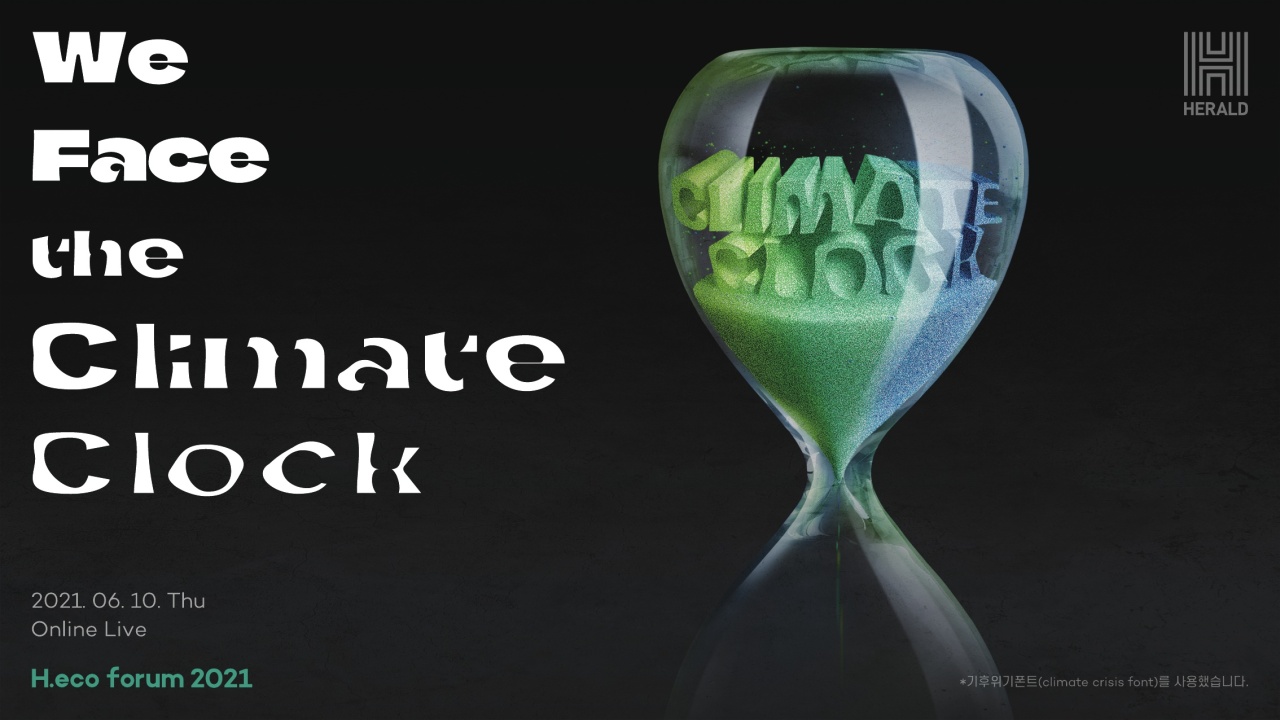 (The Korea Herald)
The event will be livestreamed on the H.eco YouTube channel at https://bit.ly/33dCF4G. English-Korean interpretation will be provided.

Juan Carlos Caiza Rosero, Colombian ambassador to Korea, and Kim Dong-yeon, chairman of the Joyful Rebellion Foundation and former deputy prime minister, are also to present at the forum.

With its new mission to take the lead in addressing environmental problems and the climate crisis, H.eco Forum aims to grow as a platform for insights and solutions to the climate emergency, an official from Herald Corp. said.