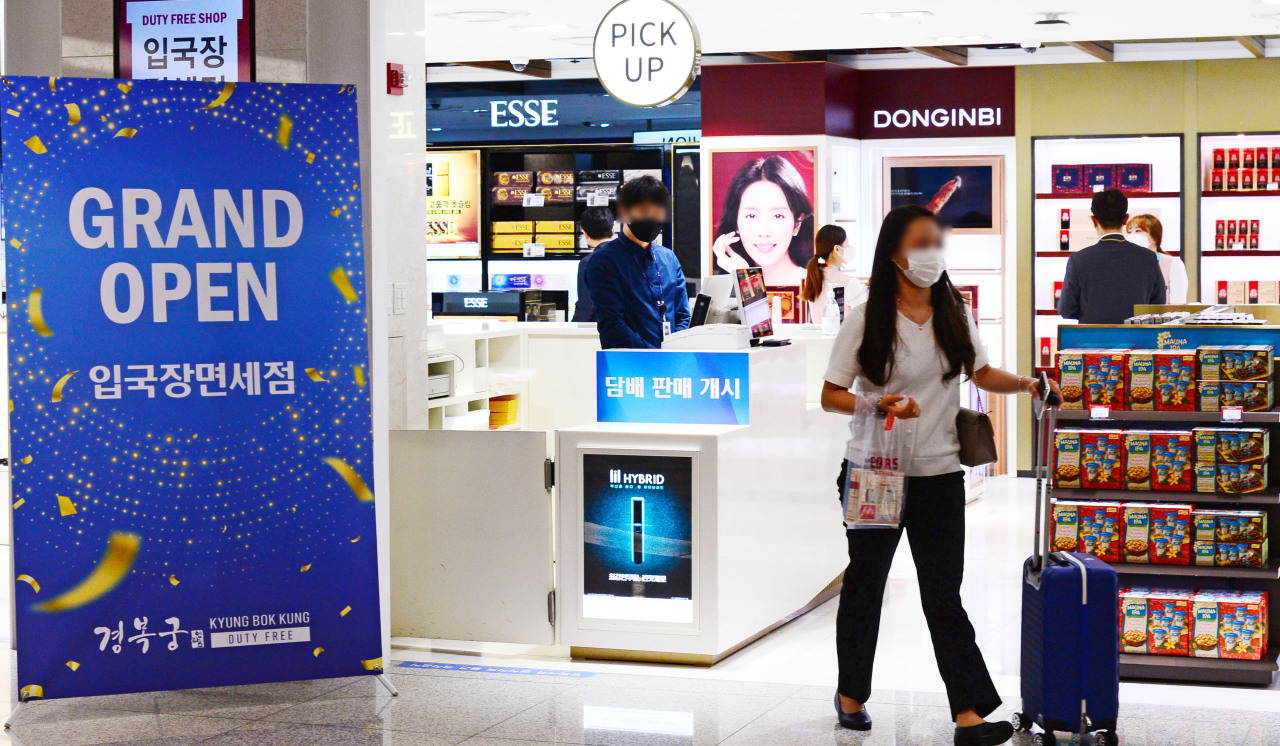 Passengers shop at the arrivals duty-free stores at Incheon Airport’s Terminal 1 on Friday. (Yonhap)
Hopes for air travel recovery are starting to coalesce around the vaccine rollout in South Korea, as booking sites and airlines prepare for a surge in travel demand.

E-commerce platform WeMakePrice said Monday that bookings for international flights jumped 442 percent between May 27 and June 2 – the week when the government’s leftover vaccine appointments began.

In a further sign of recovery, Incheon Airport reopened duty-free stores in the arrivals area on Thursday last week for the first time since October last year after finding a new store operator through a bidding process.

“Though the prolonged COVID-19 pandemic has made things difficult for the aviation and duty-free shopping industries, we hope to minimize the inconvenience for passengers by swiftly choosing the new operator and reopening the arrival duty free stores,” an official from Incheon International Airport Corp. said.

“Some of what has restricted travel demand, including vaccination, is starting to be eased, having potential impact on travel, and we are preparing in advance (for a travel recovery),” a representative at the airline said.

The move comes as some 7.59 million people in the country had received at least one dose of the vaccination as of Saturday -- which amounts to 14.8 percent of the population.

The airline is also planning to resume flights to Guam in August, with fully vaccinated passengers expected to bypass quarantine in both the US territory and Korea.

The deal is currently awaiting approval from the Transport Ministry and the flight schedule has yet to be finalized, the representative said.

Korean Air has also begun selling tickets for flights between Incheon and Guam scheduled in November.

The government is set to announce laxer social distancing rules later this month. Wearing face masks will become optional outdoors from July after receiving one dose.

Against this backdrop, some airline shares have jumped in recent days, including Korean Air and T‘way Air.

“Jeju Airline is set to resume its flights to Guam as early as August though it still awaits approval from the Transport Ministry. And expectations of travel demand recovery have grown following the news, prompting shares of airlines including Korean Air to jump,” said SK Securities analyst Yoo Seung-woo.

But he also cautioned against being too optimistic for Korean Air.

Earlier last week, Yoon Tae-ho, a senior official at the Ministry of Health and Welfare, said in a news briefing that “multiple countries with potential are being considered” for a travel bubble.

Singapore, Guam and Saipan have been seen as potential travel bubble partners, though no deal has been signed as of yet.